At the beginning of the year CORE decided to do a few big 3-day weekend kind of trips during the 2015 calendar year. Following an exploratory run in the spring with Keith and Betty Holman to feel out an Outer Banks trip we planned another trip for early October. Unfortunately Hurricane Joaquin appeared, bumped into a Nor’easter just days after a full moon, and although the Outer Banks were spared a direct hit from the Category 4 Hurricane the resulting rain, wind, swells and high tide led to flooding that shut the Outer Banks down and destroyed some roads at a most inconvenient time for us.

Although we at one point expected 11 vehicles to attend this trip in the end due to a whole host of last minute conflicts mixed with uncertain beach conditions due to the storm we dwindled down to 3 vehicles in the 3 days leading up to the trip. Still up for the adventure were the following:

…it was her trophy for the “Hell or High Water Award” since a Hurricane and a 24 hour old broken arm couldn’t stop her from enjoying this beach vacation!

Just when I thought no one else could cancel I found out that my mom had fallen and broken her arm the day before the trip was to begin. Long story short she decided to attend anyways, even before they got a chance to set it, but it meant they had to swap the Toyota Tundra with the Sienna. I told them if they were still interested in joining we’d make it work!

The day before the trip began we got word that the ferry to Ocracoke was in fact opening as the water had receded enough on NC-12, the National Park Service had finally opened a few of the 4×4 access points on the beaches, and to top it off the weather for the first time in days appeared to have a lower chance of rain over the weekend than originally predicted! The 3 vehicles all descended to the Outer Banks after meeting in Richmond. We stopped at Diggers Dungeon on the way (we had taken Friday off and so it was open) just to check out the mother of all tube buggies!

After checking into our hotels, the Cape Pines Motel and the Lighthouse View Motel, in Buxton, we tried to do some evening driving on the beach. However the mosquitos were so thick that I literally was inhaling them and 30 were bouncing on the back hatch as I opening it to get my deflator gun for the tires. We decided it wasn’t worth likely getting attacked by mosquitos for a night run and so we met back up at Uncle Eddies Ice Cream back in Buxton. We chatted, we came up with a plan for the weekend, and we parted ways for the evening with the goal of an early breakfast and then a ferry ride to Ocracoke in the morning. 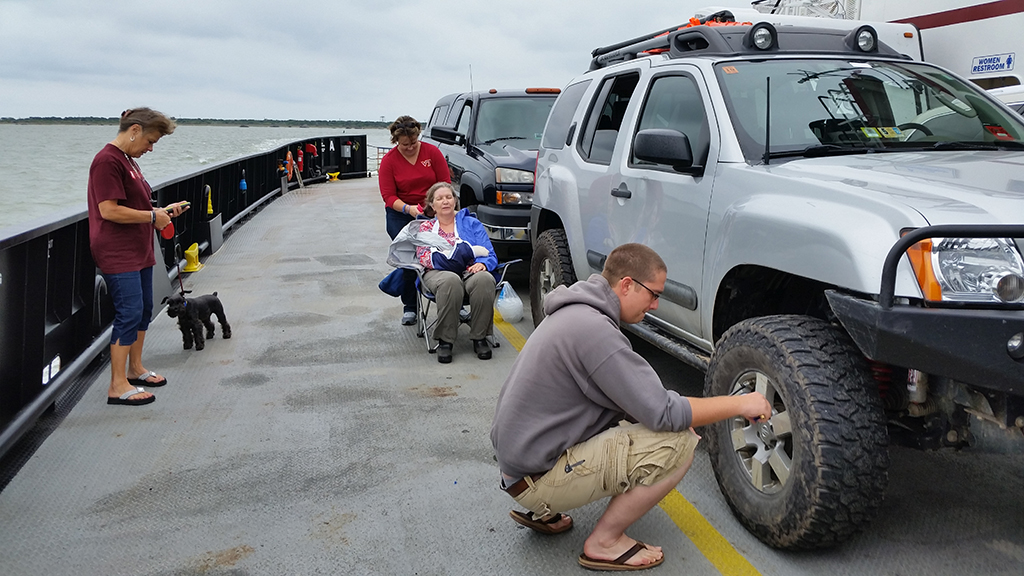 Riding the ferry to Ocracoke.

For breakfast we met at the Orange Blossom Bakery & Cafe to get our weight in their wonderful Apple Uglies and then continued south to the Hatteras ferry terminal. We caught the 9am ferry and were on Ocracoke at 10am. We rode down along the island seeing light storm damage (they had recently scooped all the sand back into a dune on the eastern side near the pony pens where the dune had been washed onto the road) and eventually got our first taste of sand at ramp 67. Kathryn and Linda both enjoyed their first beach driving experience as we went down the beach to discover tidal pools, fisherman and plenty of birds. 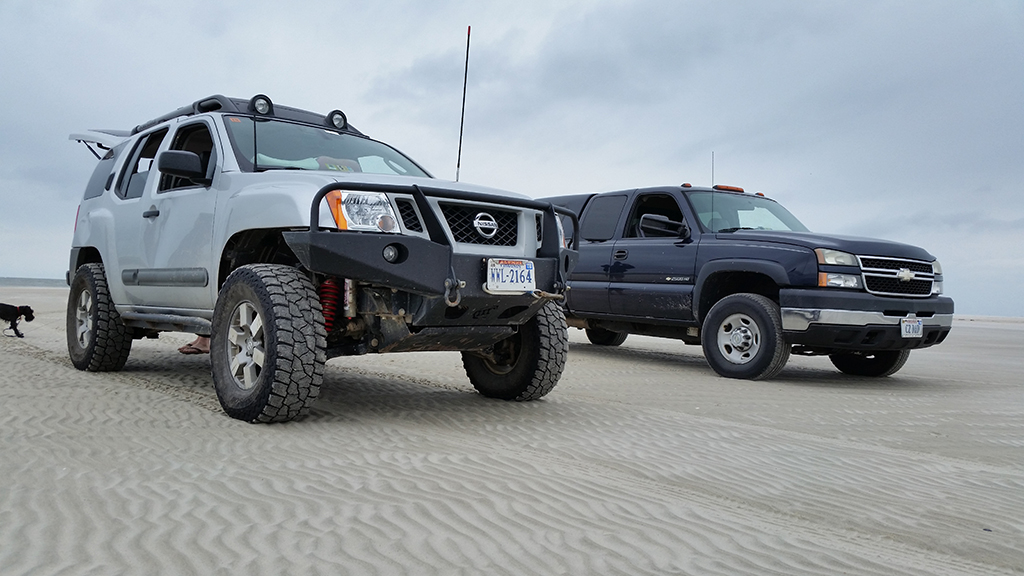 We eventually stopped at the southern end of this ORV access and walked into the pedestrian only area collecting shells and wandering in the water and tidal pools, some of which were fairly deep. When we were done we left the beach and headed to Howard’s Pub & Grill for a spectacular lunch and a neat view from their skywalk! After lunch we headed down the street to the Ocracoke Variety Store for some flip flops, CB Batteries, and some bottled waters, and then back to the beach, this time to ramp 70.

We took our time working our way down the beach, past ramp 72 which was still closed due to flooding, and eventually made our way to the southern tip of the island. It looked very different than it had in the spring, including a new small sound in the sand. The area we decided to stop at required us to drive through some lower sections of sand that clearly are under water at high tide, and was more wavy and bumpy, putting us onto what must be an island at other parts of the day! Although it drizzled briefly while at the southern tip it didn’t stop us from swimming, hanging out and even getting the kite out. 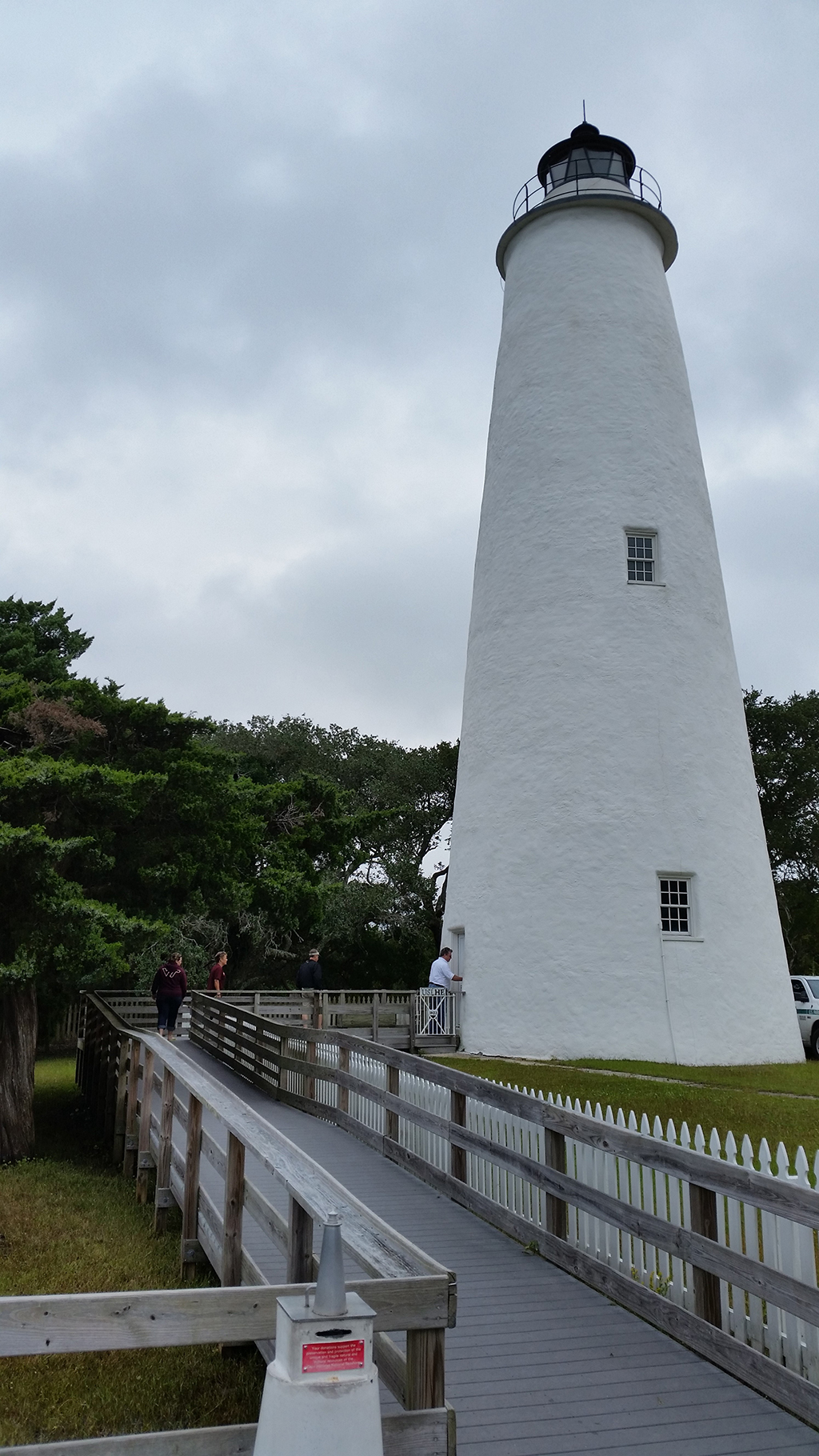 When we were ready to head back we piled into our vehicles and headed to Ocracoke for some snacks and a bathroom break. Following that we checked out the Ocracoke Lighthouse. Apparently it was finished in 1823 and is the 2nd oldest still operating lighthouse in the country! Getting to the base required navigating the mucky wet parking lot but after some balance beam action across the parking stops we all made it, still dry, to the lighthouse and eventually back again. Following the lighthouse visit we decided to head back for the ferry, getting there just as they began to board!

Back on Hatteras Island we took some time to shop at the Hatteras Landing Shopping Center at the ferry terminal for some OBX souvenirs. It was starting to get late and so we attempted to make one more beach trip for the day. In the spring a highlight of the trip was discovering the Kohler, a wrecked wooden sailing ship from the 1800’s, partially exposed on the beach. We headed back to ramp 27 hoping to see it more exposed. We got there in time to see it was more exposed, but with the high tide and the narrow beach with quickly fading light we only walked out to it briefly, confirmed it looked more exposed, and agreed some of us would have to come back in the morning at low tide to check it out again.

For dinner we went to the Sandbar & Grill in Buxton and had a great feast. Cherie and I had purchased my mom a T-shirt that read “Salt water heals all” and some salt water taffy, we told her it was her trophy for the “Hell or High Water Award” since a Hurricane and a 24 hour old broken arm couldn’t stop her from enjoying this beach vacation! After dinner we said our goodbyes to Allen, Linda and Kathryn since they would be leaving early in the morning for some Birthday plans back home for Linda.

Sunday morning Cherie, myself and my folks went for a late breakfast at the Diamond Shoals Restaurant. 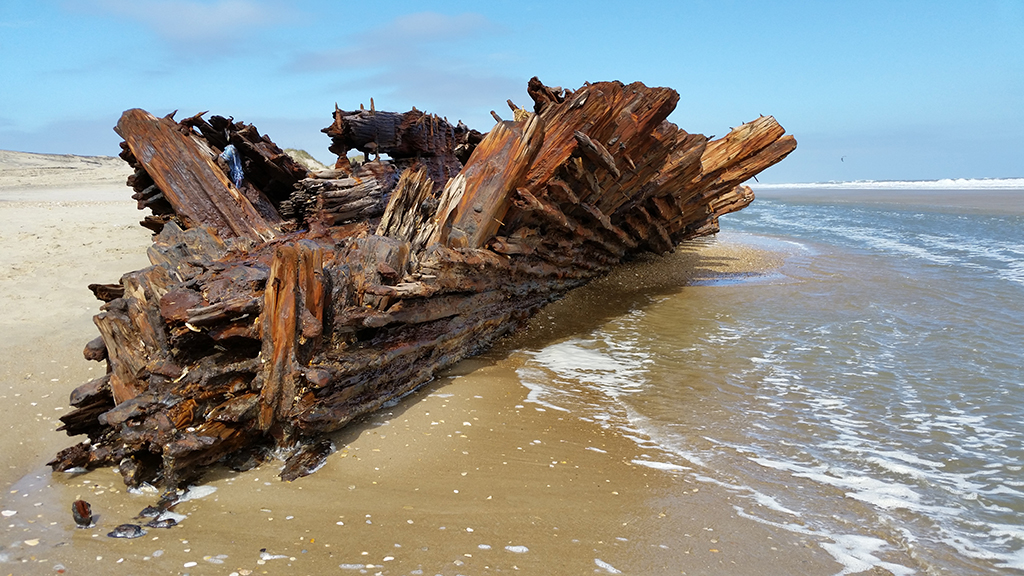 Following that they went to pick up the dog from where he was boarded in Rodanthe, Cherie and I drove down the beach from ramp 27 to ramp 25, and we met back up, picked up my mom and drove back down the beach to meet my Dad and the dog at the Kohler back at ramp 27. This day, at low tide, it was clear the Kohler was more exposed than it had been it years.The exposed section of ship was 50+ft long, 20ft wide and about 5-6ft tall, and it was a pretty impressive sight! We took lots of pictures, talked to others that came to check it out and basically dragged our feet until we had to leave. We packed up, aired back up and got in our vehicles to head north. Along the way we parted ways from my folks who were heading back to Raleigh, NC. 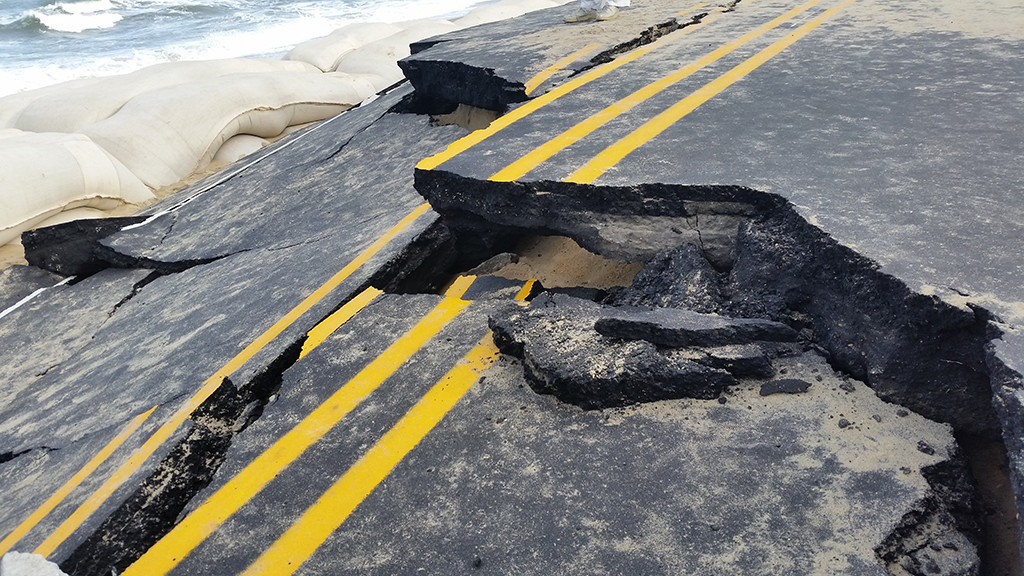 Broken up section of NC-12.

Cherie and I made one last stop in the Outer Banks. The storms the previous weekend had washed out a long section of NC-12 in Kitty Hawk, conveniently the one place where the main through road is US-158 instead. We wanted to check it out if we could and found that just next to the closed road was a public beach access parking lot. We parked and got out to inspect the damage along with many others that had come to see what the storm had done. Following further inspection and documentation of the road washed out, past the double yellow line and dropping the asphalt about 5ft at the one end, we hopped back in the Xterra to really head home. We got home at 10pm, tired and ready for bed, but we had such a great adventure and a great time with friends and family! Is it time to go back yet?