We’re always looking for new places to legally wheel and explore. Mike O’Grady suggested a day trip up to Bald Eagle State Forest in PA to check it out. He’d heard it was a good spot for overlanding and so thought it was worth a look, to figure out if we wanted to go back later for a longer stay. Unfortunately just before the trip Mike’s vehicle developed some issues that would stop him from participating. Instead of cancelling the trip we’d take his notes and proposed route and just report back what we found. Up for this adventure were the following folks.

Everyone but Scott met up at the meeting point in Frederick, then we caravaned up to PA. On the way up we ran into one problem when we found State Route 235 which crossed the mountain was closed due to roadwork. The way around added an hour to our trip! We fueled up on the detour and eventually met up with Scott and the planned location near the trailhead (40.836145, -77.192642), a parking lot that was a good spot to air down at. 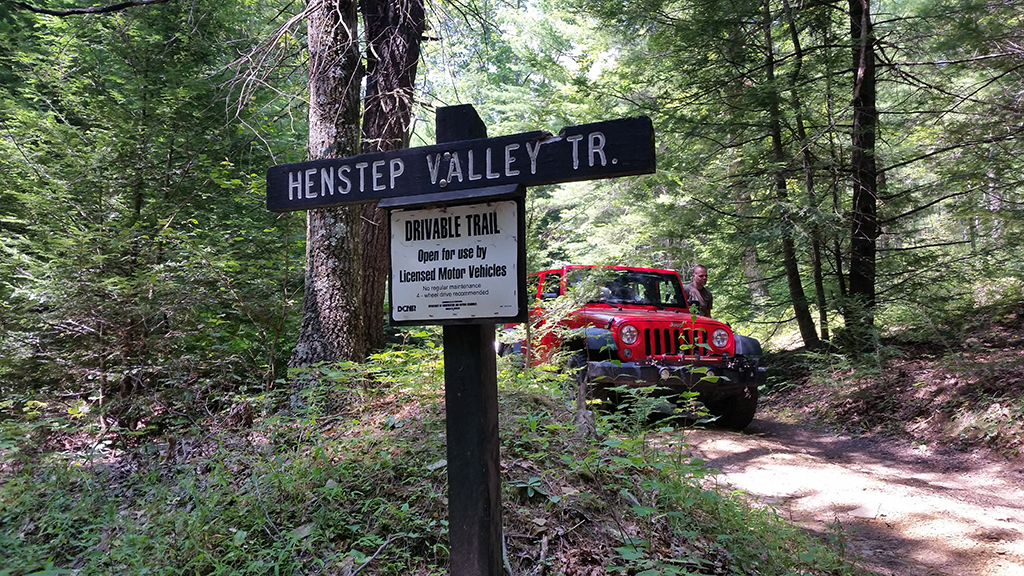 After airing down, securing cargo, getting to know one another and a brief drivers meeting we headed just north of the parking lot to our first trailhead.

We started at the eastern trailhead for Henstep Valley Trail which had a welcoming sign that read “Drivable Trail, Open for use by Licensed Motor Vehicles.” The trail as a whole was pleasant. All traversable by a stock SUV. There were some spots with a little mud, some spots that were tight and pinstriping was an issue, and narrow spots where the soil was surprisingly sandy on a shelf road. We did find one long dead pine tree that had fallen across the trail so we pulled it out of the way so that we and others could pass. 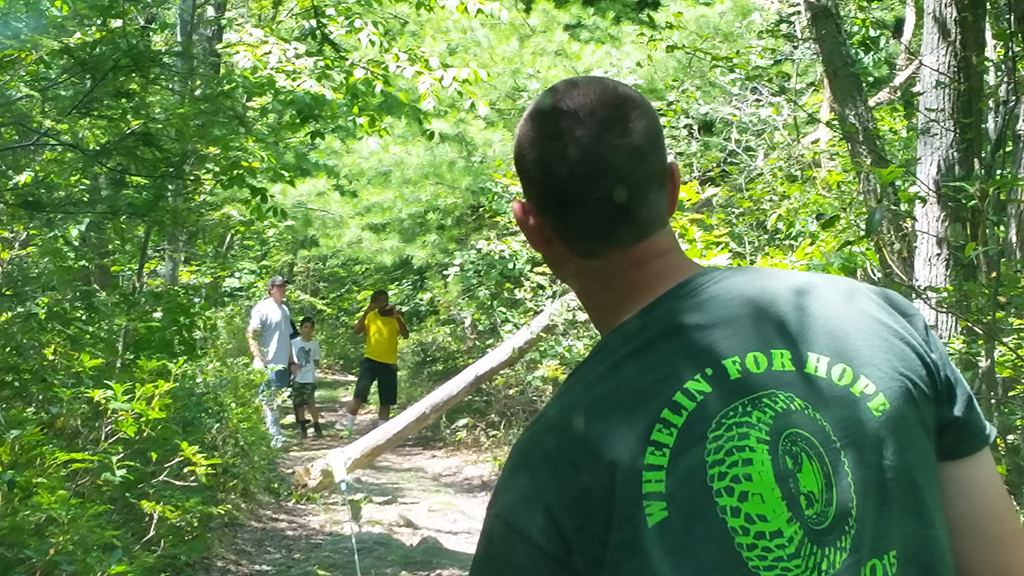 At the end of the trail we accidentally took a right onto Weikert Run Road which was off the intended route. We turned around and went in search of the eastern trailhead of Little Mountain Trail. We didn’t find it and so instead of turning everyone around just continued on and decided instead to explore Bull Hollow Road. Bull Hollow starts out beautiful as it parallels a shaded stream that is cascading down small waterfalls as it goes through the woods. Eventually the road turns away from the stream and you get to negotiate some basketball sized rocks and stumps at a few spots in the road. Eventually we did get to a point where the road ends for full-sized vehicles (at a hunting lodge or house) and the trail continues only for motorcycles. After a few pictures we turned around and went back the way we came. 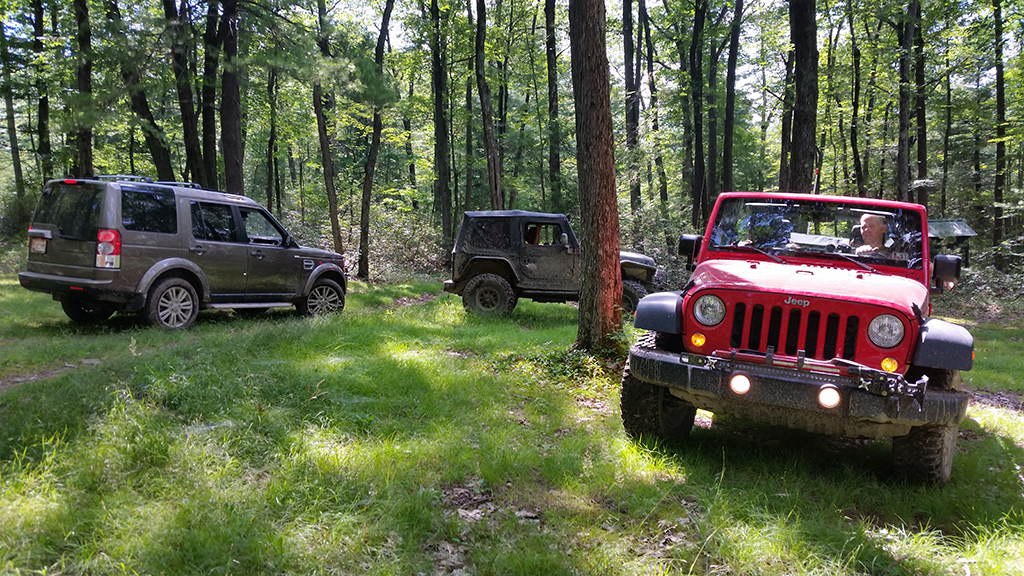 We stopped at the Snyder Middleswarth Picnic Area to use the facilities and stretch our legs. Serguei and Sebastian decided this was a good time for them to head home and so we said our goodbyes to them. From there we kept going west on Swift Run Road until we got to the trailhead for Knob Ridge Road. This ended up being the most exciting road we took, offering several places for lines which flexed the vehicle a bit but also offering lines which were stock friendly. There was even a large mud puddle that some went through.

At the western end of the road we turned north onto Red Ridge Road where we were rewarded with a great open view to the south across several mountain ridges. After enjoying the view we continued on and then turned left onto Strong Mountain Road and then onto Longwell Draft Road. These ended up being stock friendly with a few places that flexed the suspension a bit but for the most part was just a casual drive through the woods. 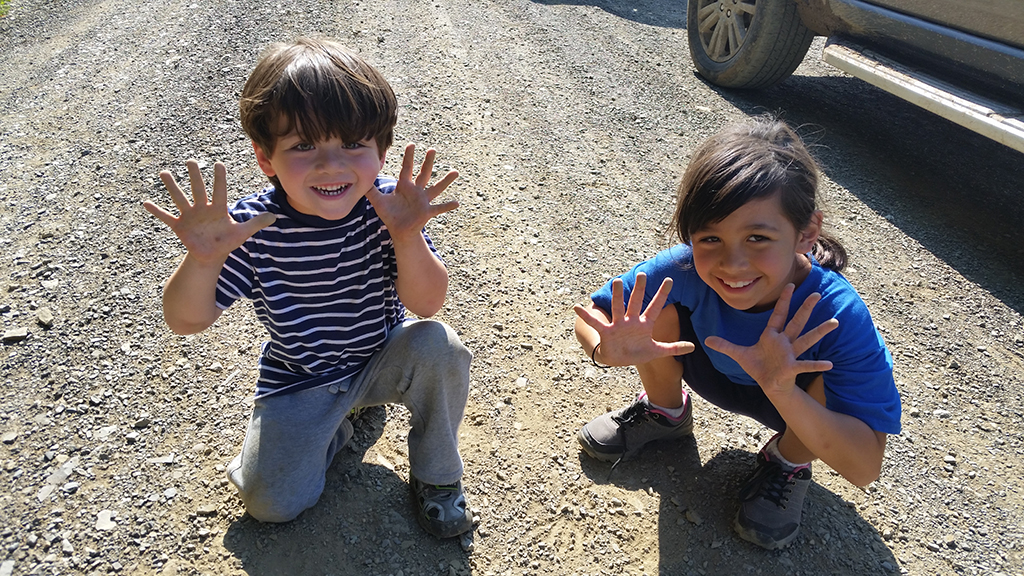 Kids playing in the dirt.

By the end of Longwell Draft Road we were ready to call it a day. We took Weikert Run Road back to Hunter Road, making it eventually to PA 235 and back to our meeting spot. We aired back up in the parking lot and then headed off at slightly different times. Robert agreed to lead and we followed south. We bumped into Y’Shua and Mister after they got turned around in another closed road, and ended up caravaning down to a McDonald’s for dinner. From there it was a straight shot home, with some of us getting home after midnight. It was a long day but we had fun meeting new people and checking out a new place.

Bald Eagle State Forest appears to have a vast network of dirt roads of different levels of condition. While we encountered nothing that was not traversable in a standard four wheel drive vehicle there were definitely places where a lift and bigger tires made certain obstacles easier or gave you more interesting options. It was clear there are a lot more roads up there to explore and a lot of great camping sites, many that appeared plenty big for a group of a few vehicles or more. The map that the state gives out is well done and easy to follow and all 4×4 trails are clearly marked with signs. We were also told by another person we bumped into that we should check out the hike to Chimney Rocks which includes a suspension bridge and a pretty spectacular view apparently! Hopefully we’ll find a good time to get back up there to spend a weekend, maybe overlanding with new camps each day or maybe just setting out in a different direction each day to explore new areas. Either way, it’s worth a trip back in the future.