Life had been full of distractions recently and for the last few months my wife and I had not able to get on the trail much. In addition to that the club has done many runs to Pay-to-Play parks recently, and I was itching for some National Park. So when I realized this unusually warm winter may make Flagpole passable I thought it may be a great time to go and this time by way of Meadow Knob! Apparently my last minute trip suggestion found several others looking to get out, because we had a pretty good turnout!

I pointed out to the group that we could see the lake from here but we wouldn’t get to the lake for an hour!

My only concern was that this trip may turn out poorly because the last two times we went up to Flagpole in the winter we found lots of ice [January 3, 2015 and February 14, 2015]. But with roughly 10 days prior to the trip with temps in the 40’s in Harrisonburg, and no snow, I thought this was about as good as it could get, and decided to roll the dice. Most of us met at the Sheetz in Harrisonburg. Once we got food and gassed up our convoy of 9 vehicles headed out! 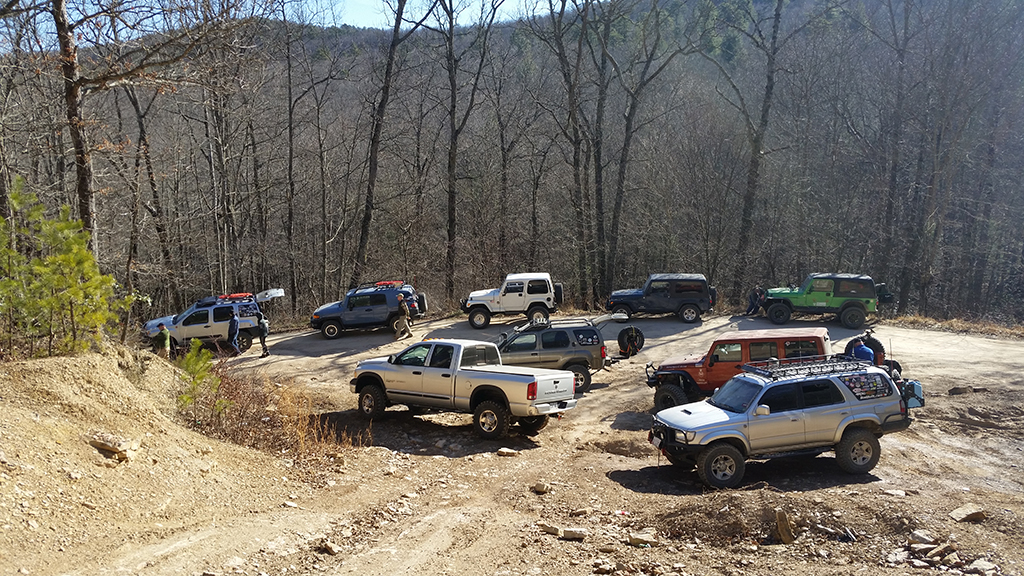 We were headed to Union Springs Road, about 25 minutes from the Sheetz. The trip there was uneventful, other than getting stuck behind a manure truck for about 2 miles. I decided to not air down next to Union Spring Lake (which is where the gravel starts) and instead continue on to a clearing farther up the trail. Once there we stopped, aired down, went over waivers and new medical forms, had a drivers meeting, and we were off again. I’ll emphasize, airing down isn’t generally necessary on this mountain regarding performance, but the trails are bumpy and long, and in an effort to have minimal tire slippage and keep my wife happy, I always air down on this mountain.

For those that have never been up to Flagpole Knob, it is a treat. The view is pretty great. There are 3 legs to get you to the top. Union Springs Road/Trail and eventually US Forest Service Road 85 is the most exciting of the 3 legs, and is most exciting going from Harrisonburg up to Flagpole along this route since that has you climbing the mountain. Skidmore Fork Road/Dunkle Hollow Road (227) is the 2nd most interesting leg, and at times can have some decent washouts or even trees down along it (which is why we had a few chainsaws in the group). Finally, 85/85A over to 539 is the least exciting, and is basically Corolla rated. Not a bad road though, with several mountain top campsites along the way, and it’s the way up to nearby Reddish Knob. For this trip I wanted to go up Union Springs, and down Dunkle, stopping at Meadow Knob for lunch, Flagpole for the scenery, and ending the trip and airing back up at Switzer Lake near US33.

The trip up the mountain was fun. We had a good group with a good attitude. I got out to spot on a few obstacles but for the most part people were doing fine on their own. We stopped at a spot or two along the way for the views, and even did our best to clean up a campsite that someone obviously thought was a perfect place to smash a case of beer bottles at. We saw a little bit of ice here and there, but nothing concerning. In fact, there is one place along the way with several large mud holes. The ice was so thick that Paul in the Power Wagon was the only one able to break through! Kandy and Christopher had a pretty entertaining slide across the same frozen puddle moments before Paul came along, their TJ just slid right across the ice! 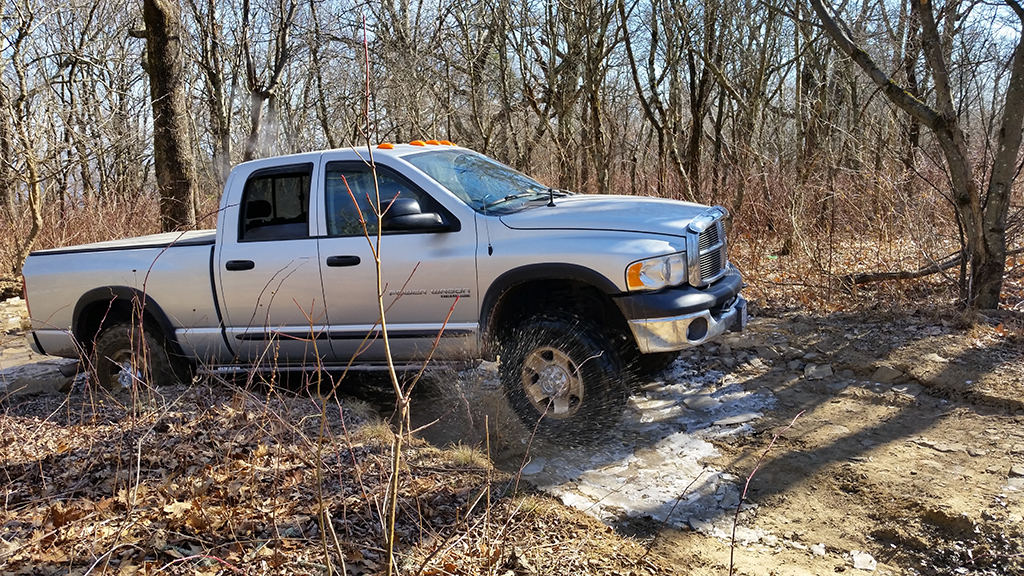 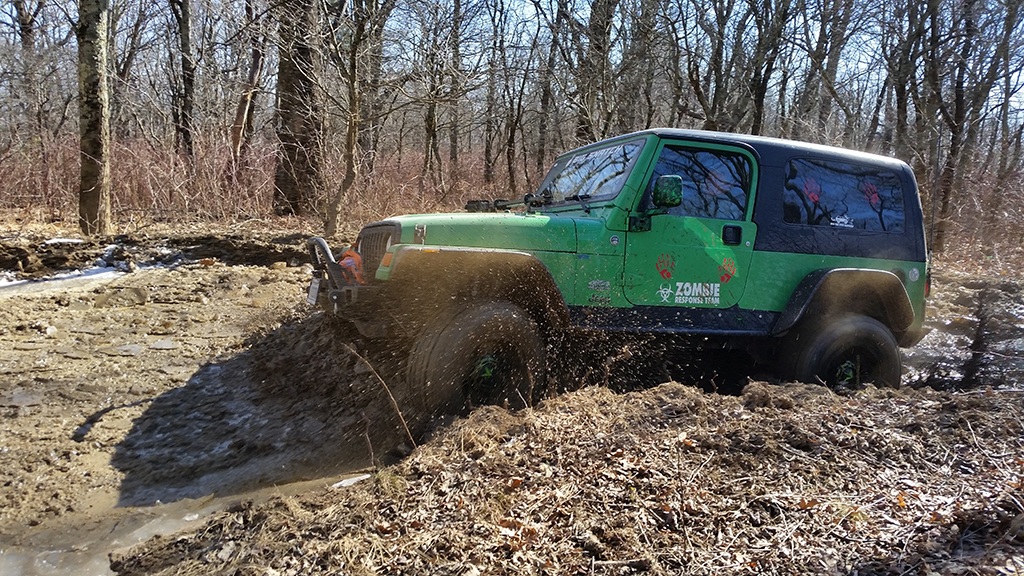 We stopped for lunch at Meadow Knob. Meadow Knob is a great spot for a lunch stop, and large enough to comfortably park 30-40 vehicles! After a couple group shots of the vehicles and drivers we all broke out our lunches and took a break. Unfortunately during lunch Robert’s dog Trudi and Paul’s dog Mandy got into a fight and Mandy got hurt pretty badly. Thanks to the quick action and experience of Kandy, and the quick clot she brought along with the various First Aid kits we had, we patched Mandy up as best we could on the mountain and loaded her, still in Kandy’s arms, into Paul’s truck. We then discovered Paul had been cut up pretty badly on his hands in the incident and after I washed the blood from his hands Mo bandaged him up as best we could.

It was clear Mandy was at risk of bleeding out, and we were at the most remote point on the mountain, so we decided 2 vehicles should head out immediately to the nearest emergency vet clinic. Thank goodness we had cell phone signal up on the mountain and Kandy was able to find an emergency vet 13 miles away. Two vehicles alone could travel faster than the group. Paul assured me he was fine to drive. Christopher was the obvious chase vehicle with his wife still in the backseat of Paul’s truck, so away they went. The rest of the group took a few minutes to recover and cleanup, but we decided to continue on our originally planned course, now down to 7 vehicles.

With the beautiful weather we found we weren’t the only ones that had the idea to come up to Flagpole and enjoy it. We ran into about 10 other groups, both small and large, on the mountain that day. That included a huge 20+ vehicle group that appeared to be a Ford/Bronco club. Their lifted Bronco’s just kept streaming down the mountain past us between Meadow and Flagpole. There was even a really great looking lifted F-350 in the group. It was good to see the old work truck outfitted and being used for recreation! 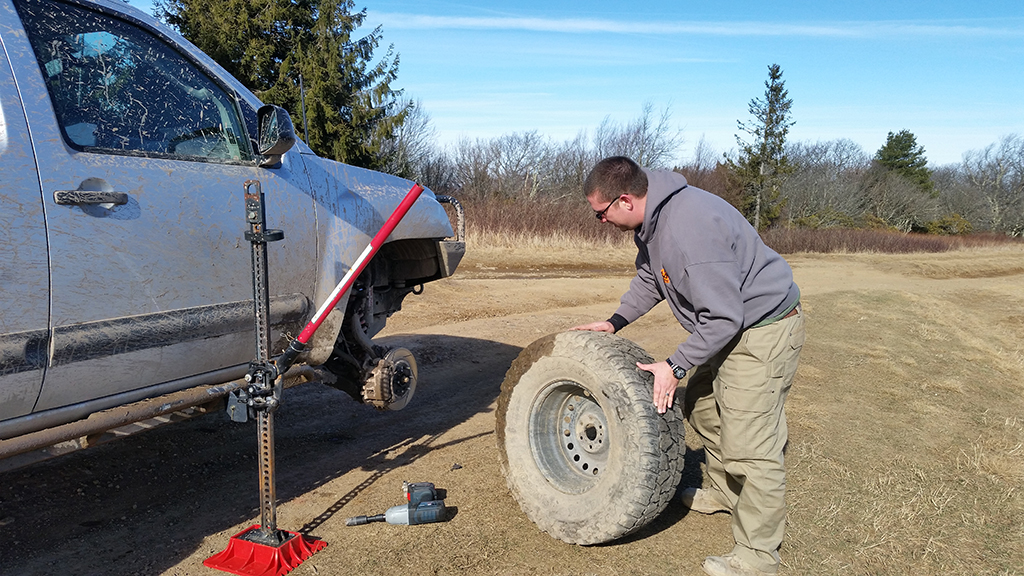 I was pleasantly surprised to find the rocks between Meadow Knob and Flagpole were more exposed than the last time I was up there, which made for a fun run for us (although I hoped this hadn’t been bad for Paul, Christopher, Kandy and Mandy). Once at the top we regrouped, and continued on to Flagpole Knob. As we pulled onto the clearing I heard what sounded like my tire rubbing my wheel well liner. Once we stopped I found it was a front flat tire that was still hissing! I pulled forward onto flat ground and the club descended on my vehicle with tools and hands coming from all directions. We had the tire swapped in about 15 minutes. The ease and efficiency with which we did the tire change apparently made an impression on another group that was enjoying the view. They told me as we pulled away that they didn’t know what they would have done if one of their vehicles had gotten a flat… I guess they would have just starved to death on Flagpole Knob waiting for help?

We turned around and headed back the way we came until we got to the intersection with Dunkle Hollow Road. With the trees devoid of leaves we got a neat sight of Switzer Lake from the top of the mountain as we headed down. I pointed out to the group that we could see the lake from here but we wouldn’t get to the lake for an hour! Our drive down the mountain was uneventful. Most notably, it was clear that they are actively logging part of the mountain. In addition to the mildly re-routed/opened roads they also had put a lot of effort into grading and graveling the last few miles of Skidmore Fork Road. The logging is right next to where we camped on the first night of our Overlanding Trip last July.

Eventually we got down to the lake and I decided to pull down along Switzer Lake to let everyone get out and air up. With the various unexpected events throughout the day we had arrived to the lake later than planned, and with the sun setting soon we decided we’d have to save our visit to High Knob Fire Tower for another day.

Over the next 48 hours I talked to Paul multiple times about Mandy’s condition. She made it to the emergency vet and after recovering from some from blood loss she underwent surgery late that night. Paul and his wife got to take Mandy home the following evening, where she is continuing her recovery. I’d like to thank everyone that helped on the mountain in any way. The quick actions of everyone, from separating the dogs to applying first aid, clearly made the difference between life and death in this situation. This incident further cemented in my mind the need for CORE to pursue First Aid training this year, as planned, to better equip us for handling situations like this one in the future. We also saw the value of gauze with quick clot which was a lifesaver and will be added to my First Aid kit immediately.

Despite the issues with the dogs, it was a beautiful day on the mountain and it was nice to get out there in the winter to enjoy it when it’s not a sheet of ice!