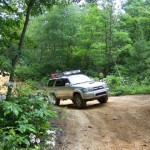 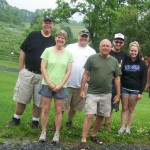 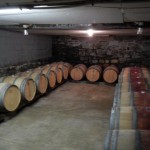 The trails to be run were Peters Mill Run and Taskers Gap Trail within the George Washington National Forest in Virginia. Not only did the group ride trails they also visited a winery. I wanted to change things up some and make the trip more than just trails. I hope to do more rides that will include side stops at historical or other sites of interest.

Everyone going on the trail ride and tour were to meet at the 7-11 on US 340 in North Front Royal, VA at 9:30 a.m. This is not the usual meeting spot for the club when heading for the southerly trails. I like change so we met in Front Royal.

The morning started out with the sky partly cloudy and by the time we arrived in Front Royal the sky was all clouds. I saw rain in our future. Hopefully neither of the other two Jeep guys was going topless. When we arrived, Robert and his step dad Fred were there waiting and Bob arrived shortly after us. The only ones left to show were Ed and Joclyn. Ed did send an email at 8:45 stating they had just left to head our way. So we waited. I sent Ed my cell phone number so he could call with updates on an estimated time of arrival. So we waited and waited and waited. Ed called and said they were in traffic on I-66 but should be arriving shortly. So we waited and waited and waited. Bob started “jonesing” to get going. Refer to the January trip report about Bob’s first “jonesing” episode. Ed and Joclyn finally arrived a little after 11:00, just a tad past 9:30. Evidently they had a long night attending the “awesome” Monster Truck Jam in Baltimore. Now that everyone had arrived it was time to head to the trails.

We headed west on SR 54 to a left on CR 678, Fort Valley Road, which would take us to the north end of the first trail head. We first had to stop at the Fort Valley Country Store to purchase our daily trail access passes. From there we made a left turn on Woodstock Tower Road taking us to the Peters Mill Run trail head. As we entered the trail Bob called over the radio to see if we should air down and disconnect. I replied we could but I didn’t think it would be necessary for the trails we would be traversing. Ed replied he was fine with not airing down and such. So we pressed on. Well wouldn’t you know the further we went the trail became rockier and rougher. Bob called over the radio again a little later and requested to be shaken, not stirred. By this time it was too late to air down. To make matters just a little more interesting it began to sprinkle rain. Proven, I can see into the future. So we pressed on. This trail is only about 6.5 miles long so we all could handle a little jarring around. Ed had a top but no windows on his YJ. A little rain won’t hurt either. There is only one obstacle on the trail so we stopped to check it out. After a little analysis and common sense we decided because of weather conditions we would not attempt it. If a rig was to slip of the rocks to the right it would only stop rolling when it reached the bottom approximately 400 feet below. Well, that is if a tree didn’t stop it first. We reached the end of the trail and headed across the road to the OHV parking area and comfort station. It was now pouring rain.

We left Peters Mill and headed east on CR 675 to the Taskers Gap trail head. This trail is a little over 4 miles long and dead ends at the top. You have to back track to the trail head. There are no obstacles on this trail and it wasn’t quite as rough as Peters Mill. When finished the run in less than an hour. It was now time to lead the group west toward Edinburg, VA for the wine tasting and winery tour.

It was still raining a little when we arrived at the winery. The winery we visited is the Shenandoah Vineyards located on south Ox Road west of Edinburg. The vineyard and winery is the third oldest in Virginia and the oldest in the Shenandoah Valley. Everyone headed upstairs to the gift shop and tasting area. For those interested in the wine tasting and winery tour the fee is $5 a person. So everyone fessed up a five spot and bellied up to the tasting counter. After the sampling of the 12 varieties of wine our Wine Steward/Guide led us down stairs via a cellar door in the floor to the winery.

Our guide informed us she was a school teacher and worked at the winery during the weekends. I didn’t catch her name so I’ll have to keep referring to her as “She”. As she led us through the winery it was pointed out the foundation of the building was the original dating back before the Civil War. The original building was a barn back then. She also pointed out the char marks on the face of the foundation. These marks are the result of General Sherman’s visit through the Valley. She stated she wasn’t comfortable with that part of her script because she is from New York. I told her not to worry about it and just insert a couple or so “ya’ll” into her script and she would fit right in. The tour of how they produce the wine was interesting. I don’t think that is how Boones Farm is made.

After the tour and purchases made it was time for a group picture. That was a little trying if I must say. I can’t get the auto timer process right at times. It was time to head home or wherever the road might lead. We said our farewells and hit the road. Bob followed us back to Front Royal by way of our original route minus trails. We continued on US 340 and Bob took I-66 east. Another great day regardless of rain and a little rough riding.