This year’s run attracted more folks than normal with a total of 14 vehicles, including friends of CORE members, showing up for the days run. Because of the large size we decided to break into 3 groups and so I didn’t even catch everyone’s names. Below are the folks in my group and that I recognized in the other groups.

I don’t think anyone was sad that they had missed the crowds at the malls and Walmarts.

JC and Paul lead one group of 4 vehicles, Kevin, Randy and Dan were in another group of 4 vehicles and finally the rest of us were in a group of 6. The others departed and went to the Northeast Property. Our group headed east out of the parking lot and onto trail L3 which apparently has degraded from a Blue to a Purple. Not 2 minutes into our run and my father and father-in-law were grabbing the OS handles and saying “Are you sure people drive through here!?” as we carefully got over the first big rocks. Then we were getting out of the vehicles to help everyone else through our first major obstacle, and with big grins on everyone’s faces we moved on! 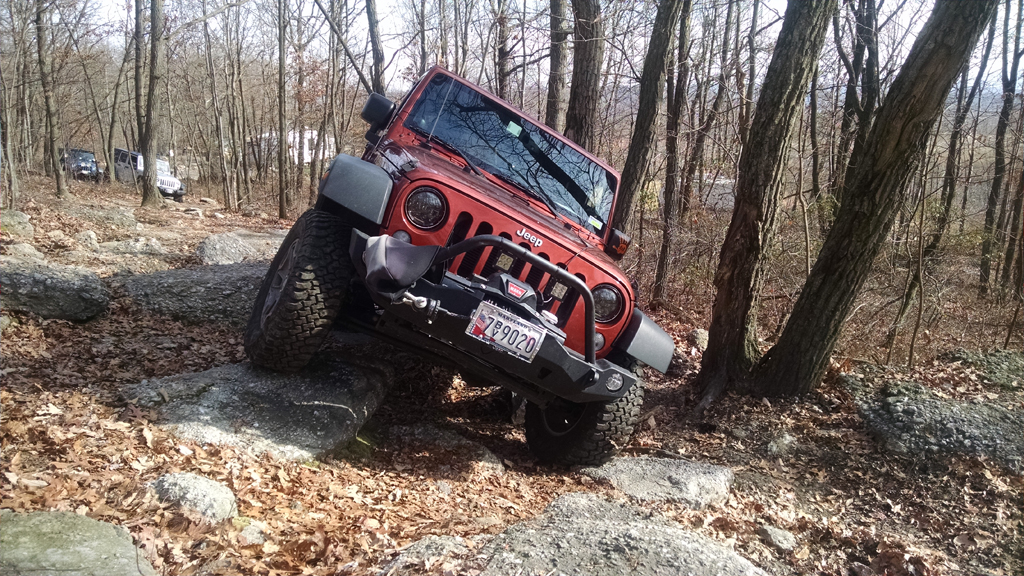 We headed west crossing onto Pole Line, then onto 1b, through the Frog Hole, then getting turned around due to all the recently cut trees and onto 1b again. We eventually found ourselves going down E and stopped for lunch in the vicinity of Tomb Stone. After lunch we decided to head to the West Property where we wanted to go down J1 but chose not to because another large group beat us to it. Instead we headed down H and went down 12C which gave the variety of vehicles and drivers different options for how tough of a line they wanted. Going down it’s a good purple with a lot of blue options! Continuing down J we were forced to turn around at the intersection with 11 because all the outputs were closed due to vehicles actively involved in logging!

We backtracked and took 12B. We came to a tree down across the trail. My father and father-in-law looking at me to basically say “well guess we have to turn around” but instead we continued on. I showed them here a downed tree is considered a cylindrical obstacle, nothing more! 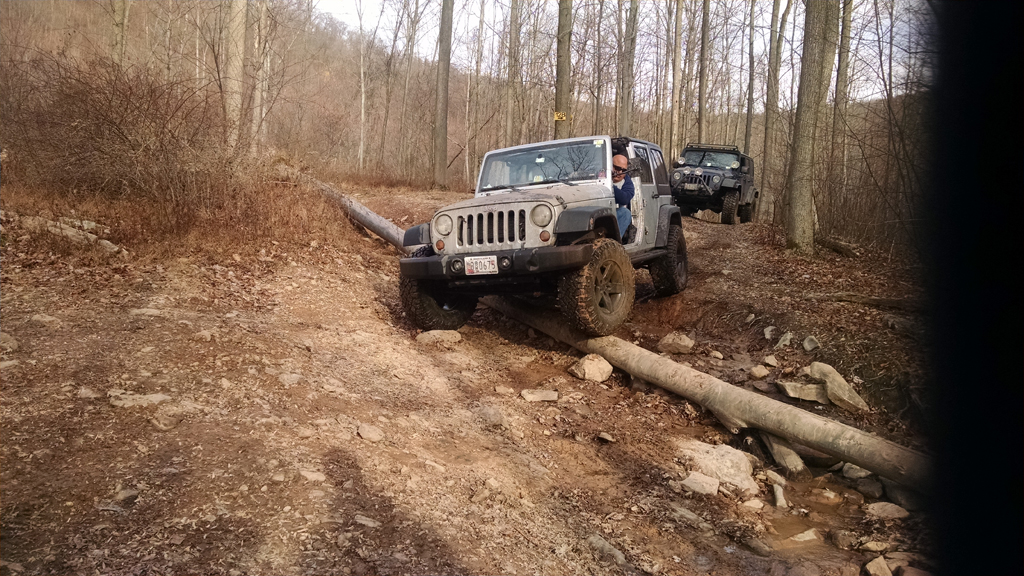 As we got to 15 another larger tree was across our path and everyone enjoyed flexing their stuff as they crossed over this new obstacle as well. We worked our way over to 14 which is always a crowd pleaser. We twisted, flexed and sloshed through the trail with most of us lifting a front tire on the last major obstacle. Trails like this are always interesting because they show how each vehicle and driver handles the same obstacles differently. No lift, lockers or sliders forces one line while lockers may allow for another, and a fully outfitted rig yet another!

Back on 11 we headed west and then onto 19B which lead us back to the north/south bound 11. It was along this part of the trail that some of us opted for a muddy rutted side trail section. Mark decided to take on the muddiest hole in the area. He nearly submerged his 37in tall tires before he just stopped. No forward momentum. He was able to backup about a foot which was enough for Shane to hook up a snatch strap and pull him out. Shane was happy to have an opportunity to help out a Jeeper since they had helped him out a few weeks earlier at another event. 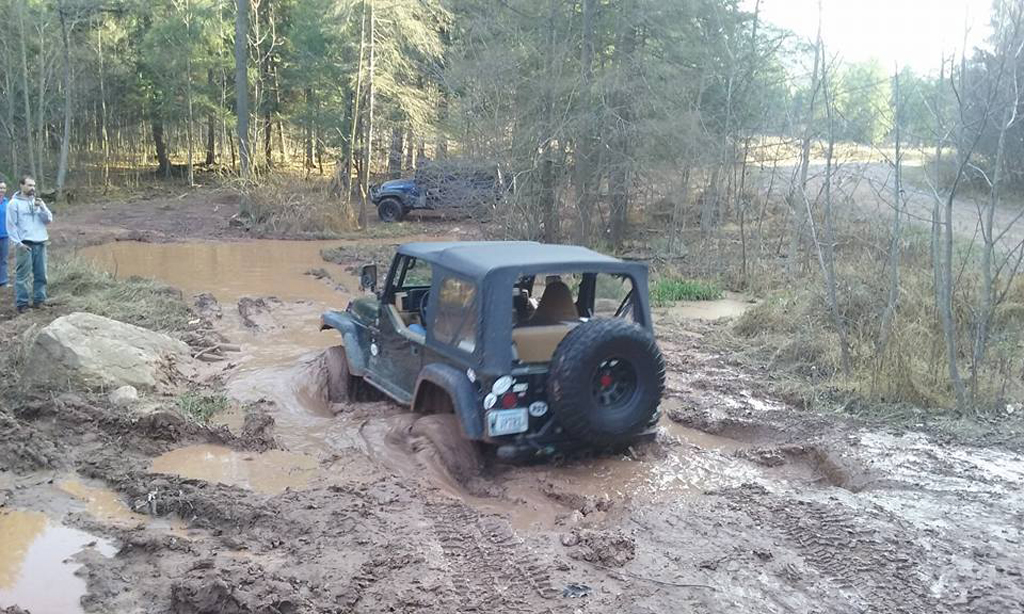 We kept on 11 going up the 2 very flexy V-ditches, and made it to Power Line. It was getting late in the day so we decided to start working our way back to the main parking lot. We went up Power Line nearly to the end where we took a right up a steep slope and into the woods on the new to some of us cut through over to E. This is a great little short trail that I recommend if you haven’t tried it yet, most exciting going up hill! We headed back on D to Pole Line, both trails were very flooded and our lower vehicles had some concerns about water depth, but everyone made it through fine. It was good to have people experienced with these trails that knew which puddles were deep and which ones would go over your hood deep! We went down Pole Line, onto B and eventually K and came back to the parking lot through the Comp Course. Some took the opportunity for a little more playing around.

The other groups had just beat us back to the parking lot. The most excitement I heard they had was one of the Land Rovers managed to take both front tires off the wheels in the same maneuver on a hill at the end of the day. 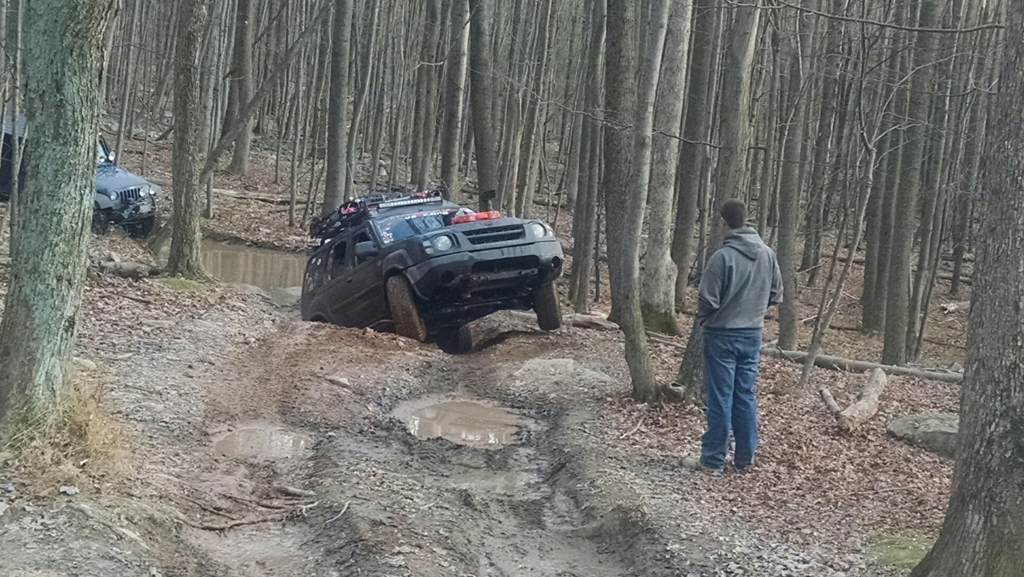 After swapping in 2 spares (one from another Rover) he limped back to the parking lot where the vehicle was loaded on a trailer and towed to Randy’s shop not too far away to reseat those tires properly and get him back on the road. It pays to have helpful friends with the same vehicles!

I don’t think anyone was sad that they had missed the crowds at the malls and Walmarts. It sounded like everyone had a pretty great day. I know in our group every time I checked how folks were doing all I could see was big wide open grins!