While a few CORE members had been to Twin Mountain Off Road Adventure twice, Cherie and I had only made it out to the park once since its opening. Although that quick day trip was muddy and memorable (it took us hours to do one trail) we left having seen only a small part of the park. We wanted to get back out to the park and really take the time to see what it had to offer – so we decided to reach out to the owner, John, and set up a full camping and wheeling weekend. Along for the trip were:

For those of you who are unfamiliar with Twin Mountain, it is a relatively new park located in the picturesque mountains of Williamsport, West Virginia. The property currently offers 57 acres of private, well-marked trails and has big plans for future expansion on an adjacent property. The trails offer a wide range of conditions, muddy hill climbs, log bridges, and off-camber crawls that provide a fun challenge for all vehicle types. Both stock vehicles and built rigs can definitely find their own adventure. The atmosphere at Twin Mountain is definitely “backcountry adventure” and as long as you wheel respectfully, you are free to make your own adventure! And with large camping areas, bathrooms with hot showers, and a giant communal bonfire, it’s a fantastic camping experience as well!

Most of us caravaned in together Friday night, and set up camp in the field. It had been raining for two weeks straight and we were very concerned about the weather and the state of the trails. We even hit a big storm on our way there! But just before we pulled in, the clouds parted and not another drop of rain fell for the entire weekend! We took advantage of the smaller firepit and enjoyed a nice dinner and a cool, rainless evening!

Saturday morning Buzz and Jan pulled in to the park as we were finishing our lazy morning around camp. Once everyone’s fees were paid and we were all aired down we set out to explore the trails. John set off to do some earth moving around the property so we were off on our own to poke around and try to get into some trouble.

The first trail I wanted to tackle was the combo that we had done in 2016 that was so “exciting” due to the trail conditions. We figured that would give us a good feel for how muddy the trails were after all of that rain. Since it was my first time navigating around the park on my own, we may have gotten a bit lost at first and ended up on the trails lovingly named, “Switch Backs From Hell 1” and the “ALR Trail”. Since John had said those trails were way off-camber and dangerous when wet, we bailed out as soon as possible and headed back to camp. We drove in a circle in the field to eventually find the trailhead headed down the Main Trail and were on our way. We turned onto the “Bridge Trail” and immediately got to tackle one of two log bridges on this trail. The bridge is narrow with thick vegetation on each side, but we had no issues, and kept going. Although this first bridge is technically more challenging, Cherie says she prefers this one because the drop off is hidden by bushes and she can’t see how far down the ground is. A short while later we came to the second bridge, this one wider but with a large gap down the middle. This one took some spotting, with Buzz spotting me across, then a combo of Buzz then me spotting everyone else across. 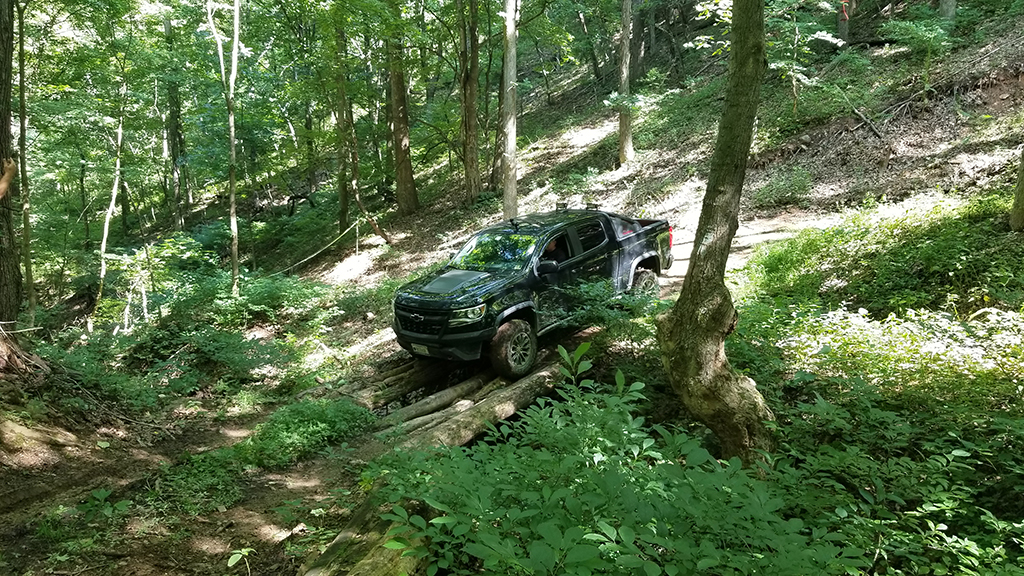 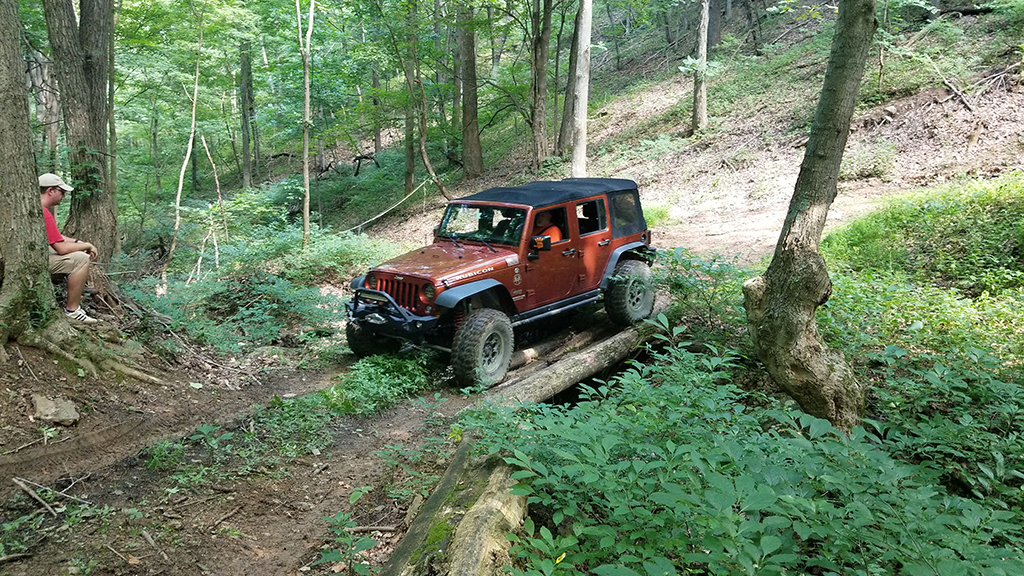 At that point we turned right and up the “Dozer Trail” we went, with no noteworthy drama. Despite the flood-inducing rain the entire week before, the trails were surprisingly not problematic. The mountain apparently drains very well! The series of trails that had taken at least three hours of our time in 2016 had been conquered in an hour with brief spotting at a few spots. Phew! I then turned onto the “Pioneer Trail”, intersecting with the “Logging Trail”, and eventually back to the Main Trail which we went up to get back to the main field. Although we hadn’t been out for too long, it was lunchtime and we decided to take a break.

We’d made good time of the trails so far, and John offered to lead us on a tour of the other larger property that he owns across the street! After lunch we all fell in line and followed him to his second property, approximately 200 acres encompassing all sorts of terrain. Once through the locked gates, John led us on a few-hour-long tour, including some very primitive trails. At one point he had to press down an entire bush with his bumper that had overgrown the trail. Next we stopped briefly in an open field, filled with wild mint, and John said he wanted to scout ahead alone for a bit and make sure the trails were still open. Before leaving he came over to our window and said, “by the way, welcome to Unicorn Shire!” – apparently we were in a magical meadow!

Once John came back and confirmed the trails were accessible, we headed up in to the woods and up the mountain. Although most of the trails were stocker friendly there was one trail which a small group of us tackled twice from different entrances, with a section that was anything but stocker friendly, headed down the valley and paralleling a stream. John told us to all meet back up at the “top of the hill next to the giant pile of tires” and he said he had a surprise for us. We all parked (yes, it was a giant pile of tires!) and took a short walk. The trees opened up to a small meadow on top of the mountain – we were on a powerline path splitting through the middle of his property. He pointed to the exposed side of the hill and said the rocks were filled with fossils! Apparently the entire place had been under the ocean at some point and all of the rocks were filled with marine fossils/shells. We spent a half hour or so searching for treasure and snacking on the wild berries growing all around. 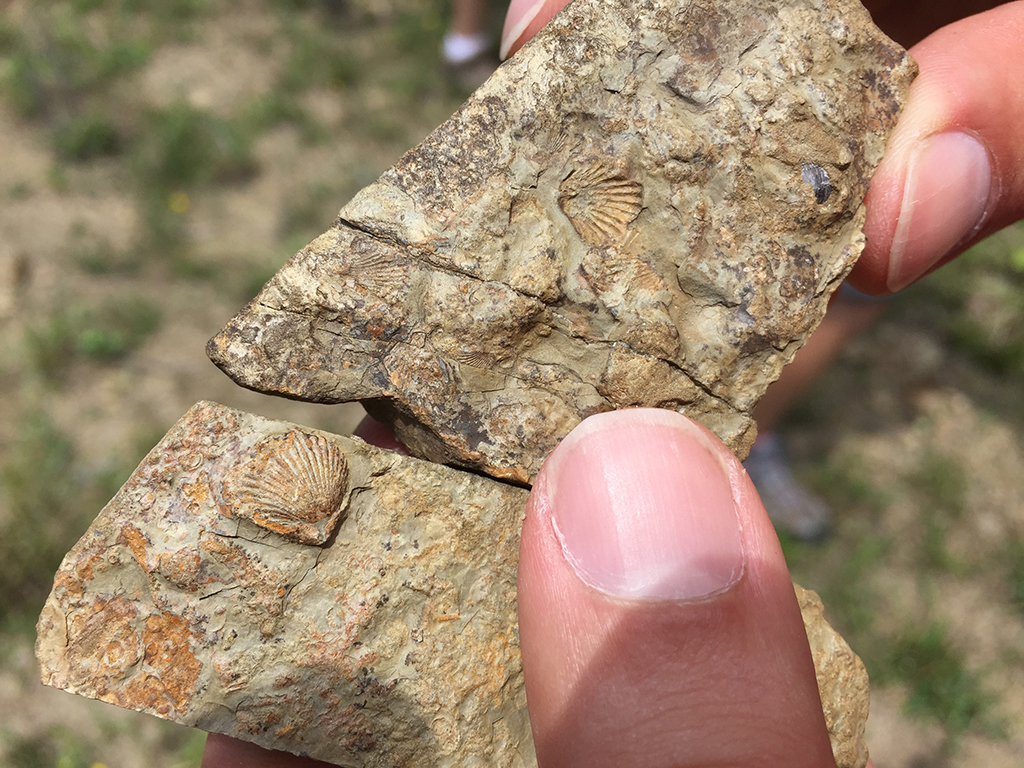 Once we had had our fill of the second property we headed back to the main property. Some of us decided to stay in camp, just to take a break or to have a snack, but a few of us hit the trails again just to do a few more loops. Eventually Jan, Ben, and Buzz headed out, since they were making this a day trip, leaving the rest of us to make some dinner and set in for the evening. The highlight of the evening was the huge bonfire which John lit for us, and gave us a great focal point for the remainder of the evening. The last of us headed to bed around midnight. 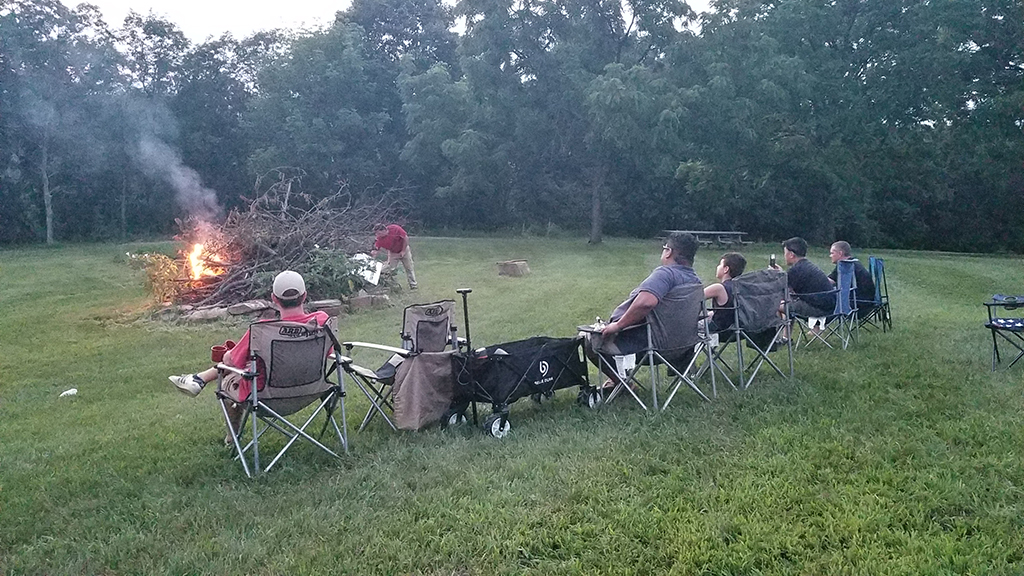 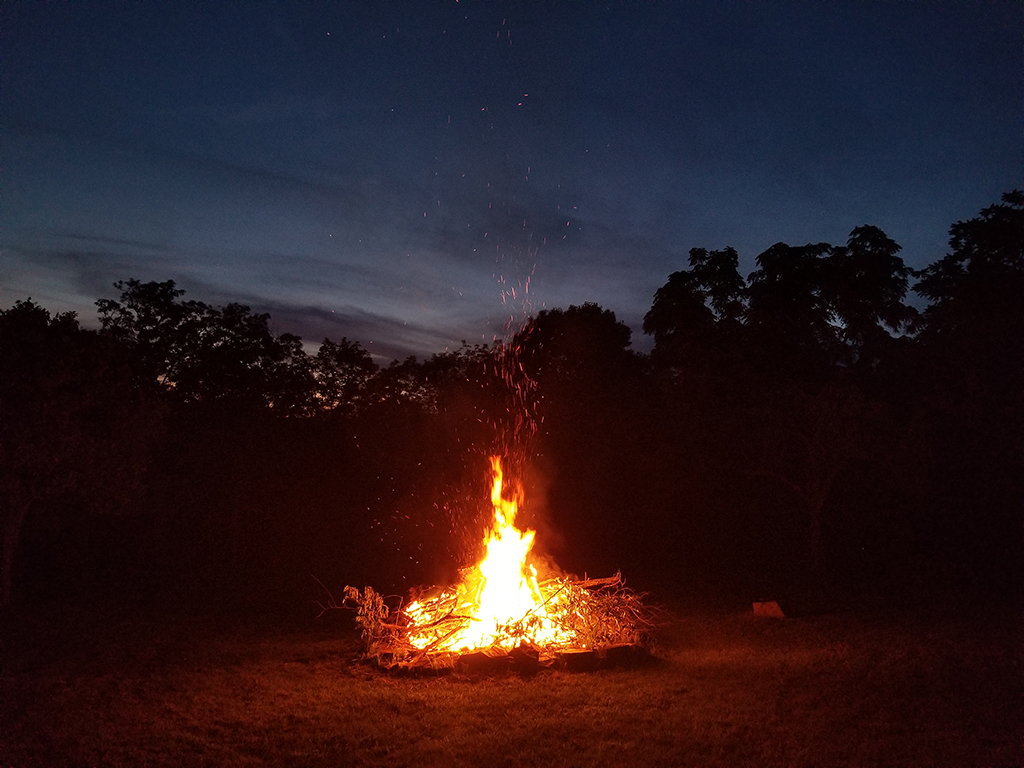 Sunday morning Jim, Valerie, Cherie and myself decided to walk “Switch Back From Hell 1” and the “ALR Trail” to see how passable they were. John described them as very off-camber, and with the amount of rain we’d had recently none of us wanted to get into a muddy off-camber situation in the trees with no good solution. After walking the trails we decided to tackle them by 4WD, and so hopped in our vehicles. The only trails we hadn’t tackled by noon were “Bull Dozer Hill” and “Bear Crossing”, both of which John described as “very hard”, with features that would likely lead to body damage in conditions right after heavy rain – so we decided to pass on those this trip. After our time on the “ALR Trail” we also went to the top of the main field to enjoy the view, and procrastinate on packing. 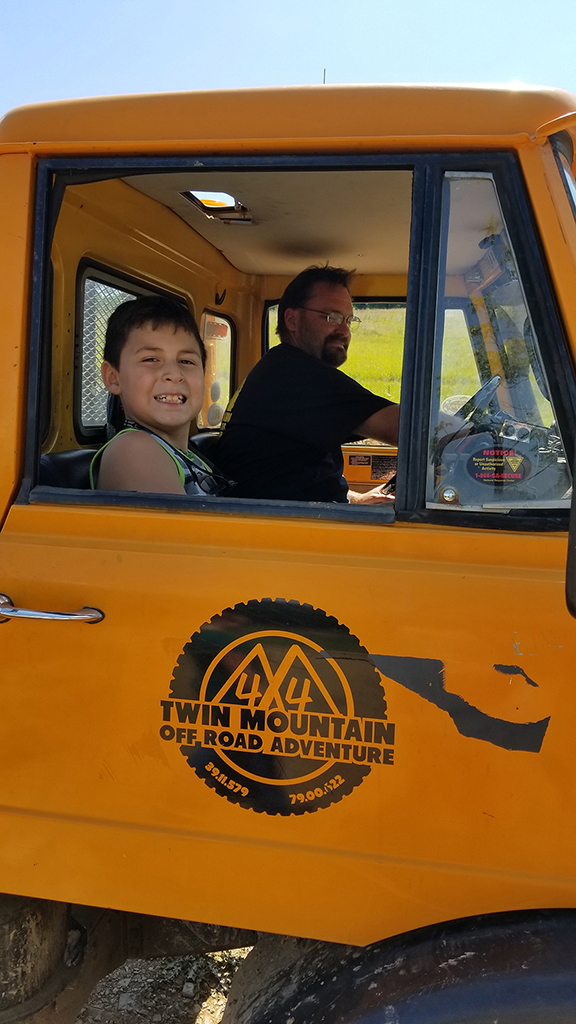 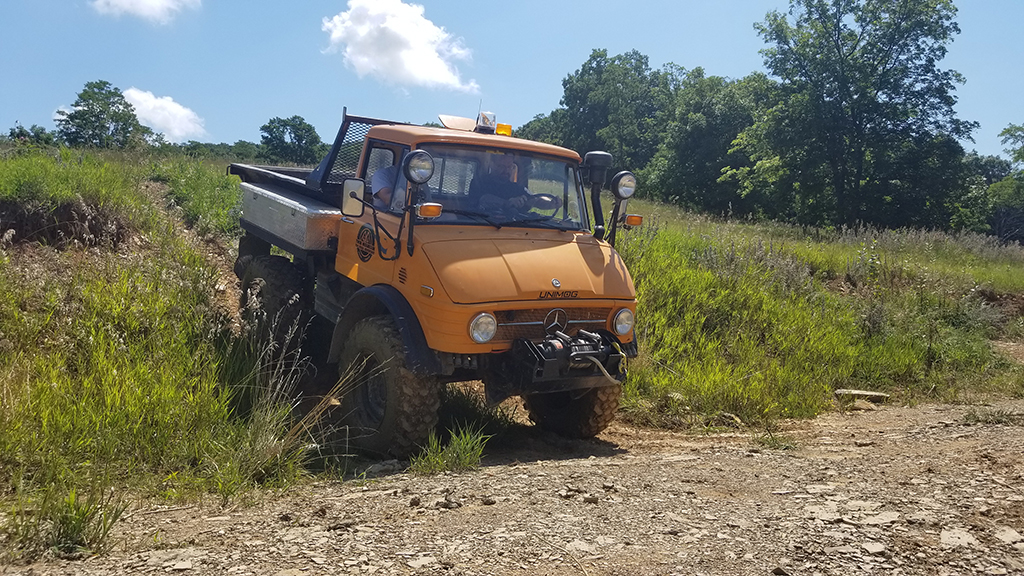 But all good trips must come to an end. As we packed up John gave anyone that was interested rides in his Unimog. What a beast! That included going backwards up a nearly 40 degree incline, and showing the super low gearing that could result in a nearly unnoticeable wheel speed with no one in the vehicle (rated to a top speed of .07mph). But we all packed up and headed out, with the Kings following us on Williamsport Road, just east of the main entrance. John and the GPS both recommended the route, and we were glad they did! Spectacular mountain views, huge orchards, and beautiful blue skies made it a fantastic drive! Thanks again to John for a great weekend, and the great route recommendation that was icing on the cake! We’ll be back soon!