We have had a lot of guests coming out to CORE meetings and trail rides that are brand new to our exciting hobby. So when Chris S. came to a meeting and we got to talking about the many things that one should know we hatched the idea of doing a beginners run. I figured it would be a small group, but boy was I wrong! About half the group was experienced CORE Members and half was new to off-roading drivers. Robert even decided to bring out his brand new 2016 4Runner to see what it could do, and passed the keys on his modified 2000 4Runner to Fred for the day!

Our huge group consisted of:

…a good driver can get a stock vehicle through a lot of places where an unskilled driver in a modified vehicle doesn’t even see a good line!

About half of us met up in Frederick at about 6am Saturday morning, grabbed food and gas, and headed north on US15. A second group headed up from the north side of DC/Baltimore area. The rest met us at the park. We arrived to Rausch at about 8:30, got everyone into a line, registered, waivers signed and introductions made. At a little after 9 we started to go over a “Beginners Guide to Recreational Off Roading” discussion that I had come up with just for this occasion. I wanted to teach people all the things that take a while to learn, like differences in recovery straps, jacks, safety tips (thumbs out of the steering wheel!), and etiquette. With a few good questions covered, and some recovery items shared with the group, we were ready to hit the trails around 9:45. 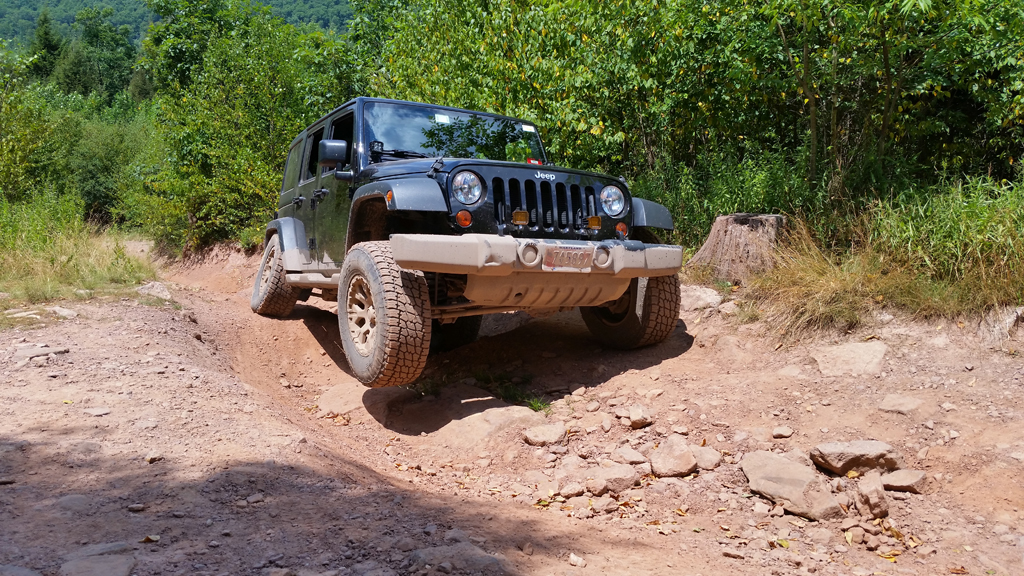 Rausch was a great location for a trip like this because of the density and variety of trails available. I figured I could gauge people’s comfort level periodically and increase or decrease intensity accordingly. We headed east out of the parking lot onto the green trails at the end of the park. These were even rutted more since I was there the weekend before but it was a good opportunity to push everyone a little right off the bat. Most people were pretty excited about the trail, requiring spotting for many at several spots. Jimmy and his daughter were a little uncomfortable about the trail though and after getting onto A they decided they’d call it a day and head out through the Comp Course.

The rest of us headed onto B and C until we got to Pole Line. We were at the top of the hill with 3 fairly intimidating optional lines for people to choose to get down the hill. We got out and discussed optional lines as a group and each driver made a choice about which optional line they’d do. I spotted most through their chosen line, which was easier for some than others due to our variety of vehicles, but even Robert in the bone stock 4Runner made it through the rough middle line unscathed! As I regularly tell people, a good driver can get a stock vehicle through a lot of places where an unskilled driver in a modified vehicle doesn’t even see a good line! At the bottom of the hill Mike O’Grady fell in line (he had arrived late after dropping his son Jake at Rausch Trail Riders with his dirt bike). We continued on Pole Line, through the big puddles and onto the West Property.

We headed down H and stopped at the clearing where it intersects 11, where we all hopped out to enjoy lunch. The group was still all smiles, so far so good! After lunch we continued on down 11 and hopped on 14, one of my favorite trails. Trail 14 is a twisty trail threading through the trees and big puddles and several good flexy spots. Well normally, this day it was so hot and dry many of the puddles were gone! We wound through the trail and got out to help folks through the one especially interesting part near the end, where we all had to go up and over a tall hill which flexes out vehicles and makes all look for traction! Everyone made it through, some easier than others, but all unscathed and with tailored lines for their vehicle. I really enjoyed watching Shawn Janson’s lifted Cherokee go through this section without issue. 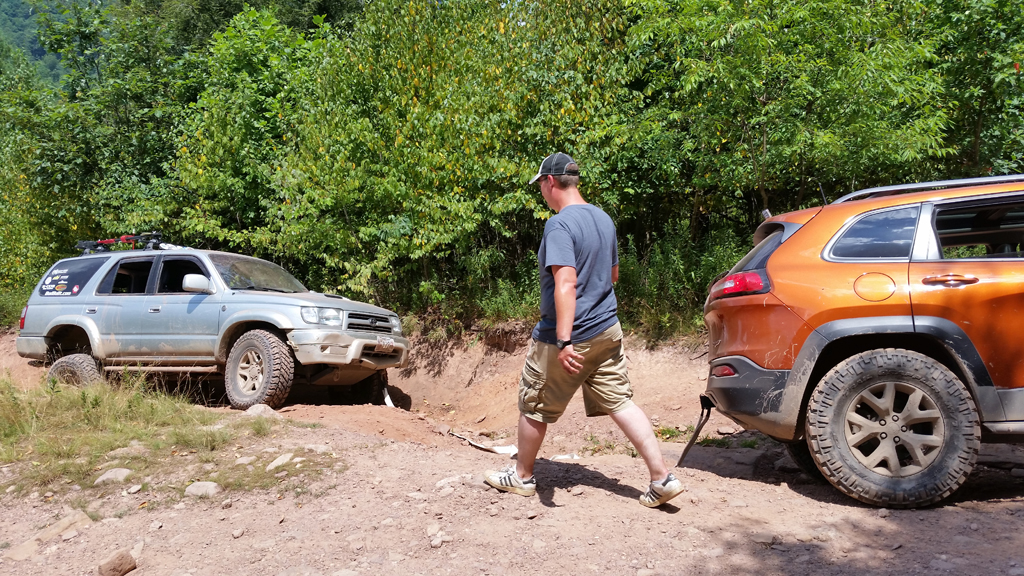 We continued, back on to 11, and then followed 11 as it turned left (south). Some of us did the small optional obstacles in the woods just before you get to the moguls. When we got to the moguls at the base of the hill on this side of 11 I got out again and explained to folks about the optional section coming up. I also told my passenger, Justin, to hop out and get in the drivers seat, gave him a few pointers, then went up the trail to get videos of people doing this section and be in a position to provide direction to drivers. This section is fun because it just flexes your vehicle back and forth getting into bigger and bigger moguls until the end when it lifts some tires off the ground. Some of the older vehicles without electronic traction control struggled right at the end. Fred in the 3rd gen 4Runner did get stuck and was recovered by Shawn in the KL, but other than this excitement everyone made it through without too much issue.

We continued on up 11, through the chute at the top and turned left onto H. We rode this the whole way back up to J, stopping at the end for a few minutes because my vehicle along with a few others was having an overheating issue. It was hot, and the engines were getting hot too! Once cooled we got going again, crossed back to the East Property and took a right on E. We eventually got to the 101 Trail and did that, which everyone seemed to enjoy. Then we went back along E, turned on B, then did trail 1. This too, normally a wet trail, was surprisingly dry! We took this until it intersected back with D and then onto the intersection with Pole Line again. 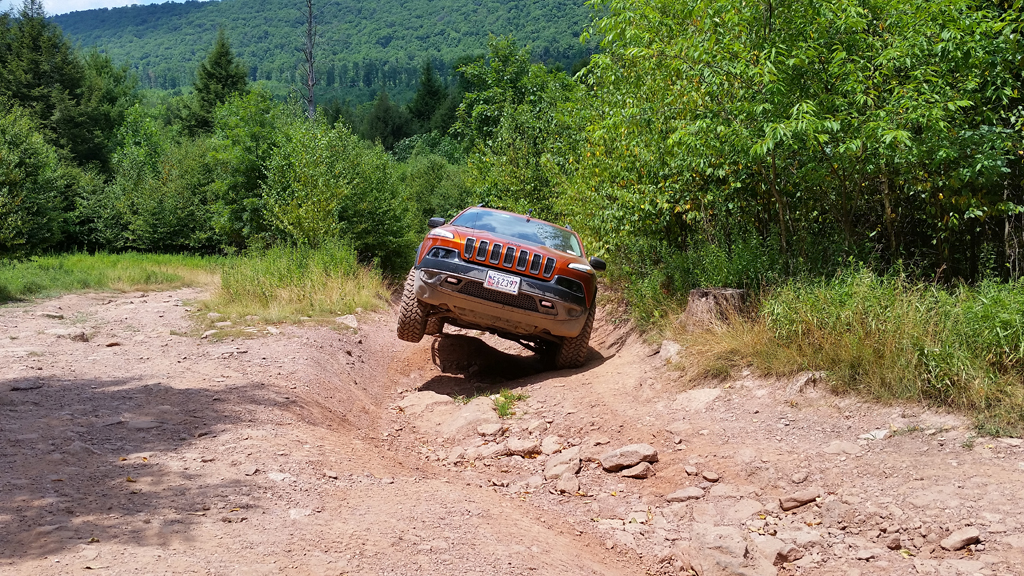 We hopped out of our vehicles for a few minutes, as a crowd had formed blocking our path at the Mud Pit on Pole Line. Someone in a heavily modified Cherokee with an exocage was being extracted from the Mud Pit by two JK’s, all forming a 3 vehicle train! When they freed him the driver hopped out of the now all brown Cherokee, the driver was also covered in mud head to toe! We watched the crowd disperse a few minutes later, some choosing the deep puddle side of Pole Line, then we each chose one of the optional exits out onto Pole Line. When we got back to B we decided we had had a good day and that we’d head out toward the parking lot.

Back near the parking lot I led everyone up onto the big rock in the Comp Course. Somehow Robert and Fred got separated from the group, but the rest of us all made it up onto the rock for what turned out to be a great group shot that really showed our vehicular diversity! Once the pictures were taken we spent another 20 minutes getting everyone safely down, we aired up in the parking lot and said our goodbyes. Our huge group was great, without too many stops, and we got off the trails without even a flat tire! At the end of the day everyone still seemed to be smiling so I guess we did alright for our Beginner Trail Ride!