Somehow the summer is flying by and with that our opportunities to wheel at Chaos Off Road Park (CORP)! I bumped into AK at the PA Jeeps Show and he mentioned that he had missed CORE at CORP this year and that there was one event left. So we saw who was interested and here is the crew that showed up for a day trip.

I suspect he didn’t mean to hit the gas as hard as he did but from two vehicles back we heard him gun it and fly 1ft forward into a tree!

We fell into a line with the following as well: 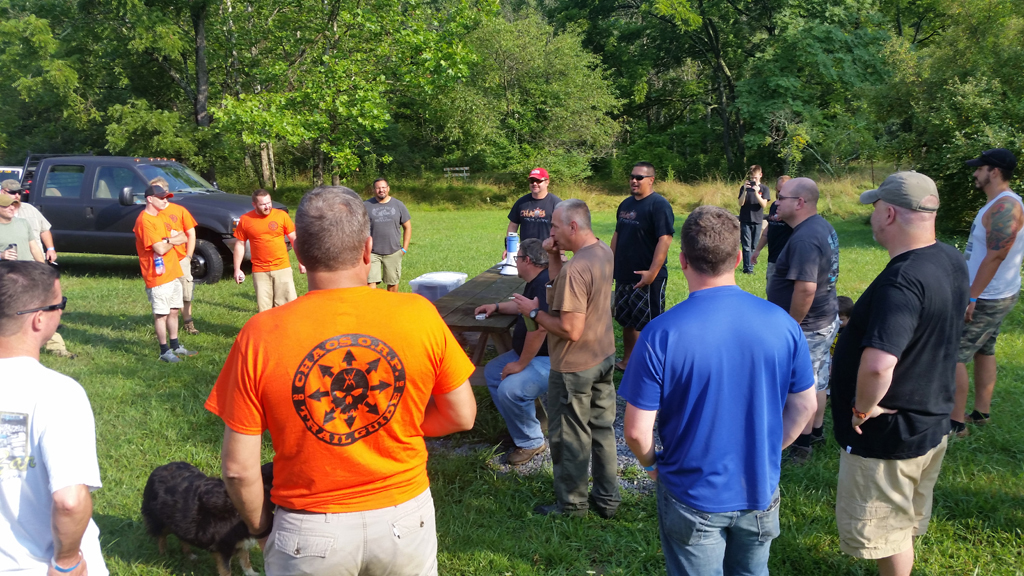 To make sure everyone has a good time AK sends all groups with new to CORP drivers out with guides to ensure they see a good variety of the trails and make it back safe and sound. These guides have received additional training during weekends prior to the park opening in the spring. Angel and Tabitha were our guides. I was especially excited to ride behind Angel and watch his recently SASed by Chaos Xterra perform on the trail with all it’s new goodies including 40in tires, Dana 60’s and lockers! I won’t do a step by step report of what we hit, but needless to say we hit a good variety of terrain on our guided tour. We went into big sinkholes, smaller rock gardens, manmade and natural obstacles.

Angel did a great job leading us around. At about 12 we stopped for lunch up on top of the mountain. 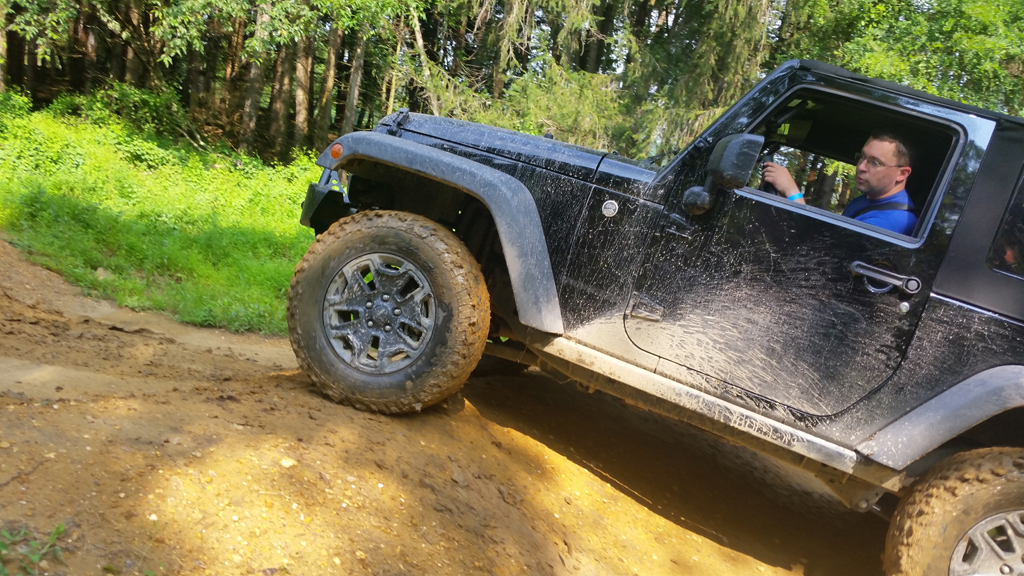 In the next few minutes it got dark and started to sprinkle, and then sprinkle harder, then rain. We all retreated back to our vehicles as the rain evolved into a downpour. When everyone was done we moved on, heading back down the mountain as the rain continued. It was raining so hard rivers of water were running down the trails, making it seem almost apocalyptic! Somewhere between lunch and 1pm the rain stopped, and as we rolled back into the main field it was clear the sun was shining again. 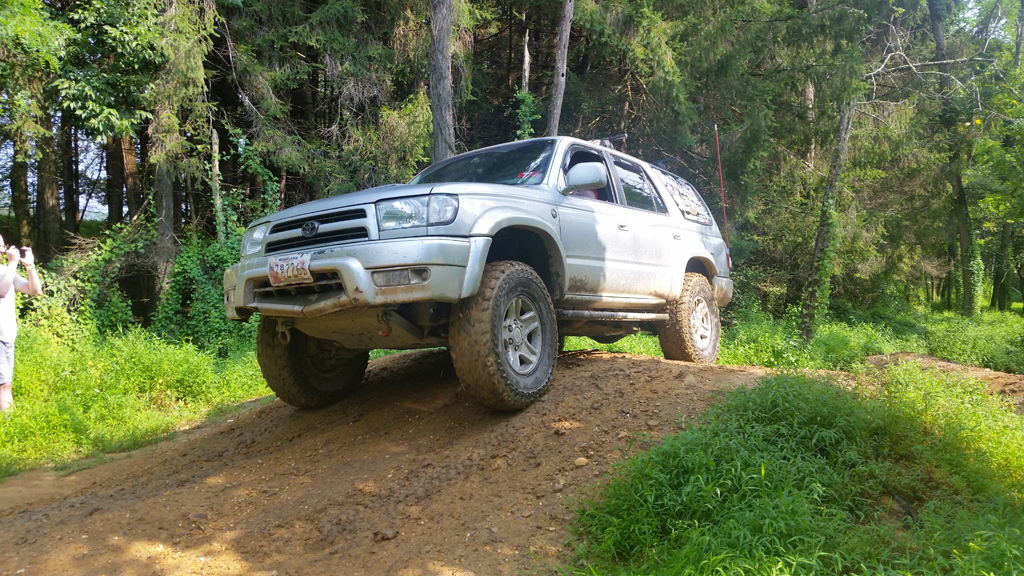 Our guided tour had ended. Eric and Mike decided to call it a day and Tabitha decided to hang back at camp. The rest of us decided to head back up onto the mountain for some more fun. We hit some of the same trails we’d already hit, and some obstacles that we had bypassed earlier. The rain had made everything super slick so getting traction on the obstacles was difficult. We all had fun with some hill climbs and rock gardens. I even got the X up on Poser Rock for some great pics! 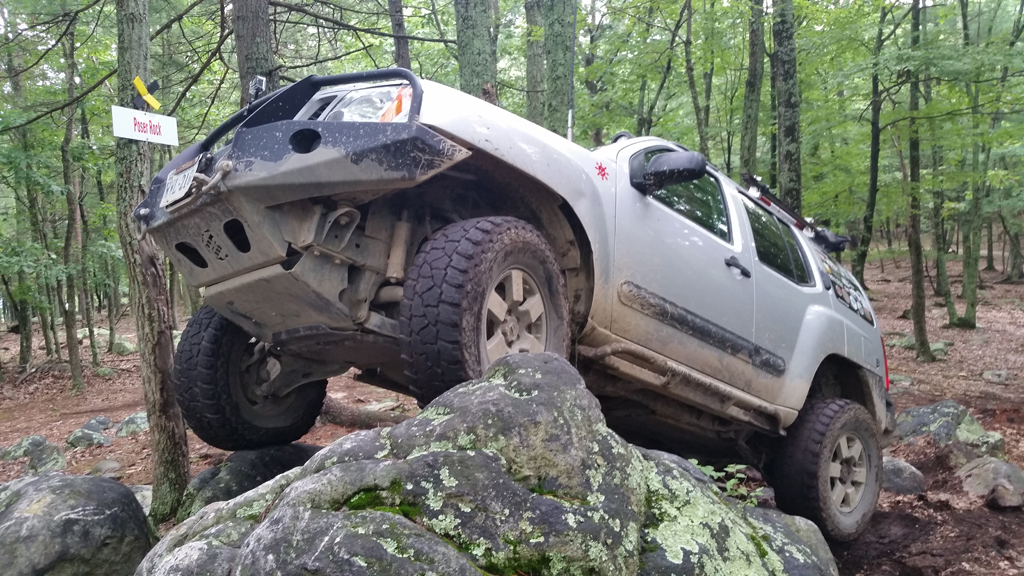 One highlight was when we got to Bronco Rocks which Cherie and I helped clear during one of the Spring Trail Clearing events. We tried to help Angel get up the most difficult line on the rocks but with everything as slick as it was he decided to try a slightly less exciting line after several attempts. Still great to see these obstacles get used, and see a beast of a vehicle in action! 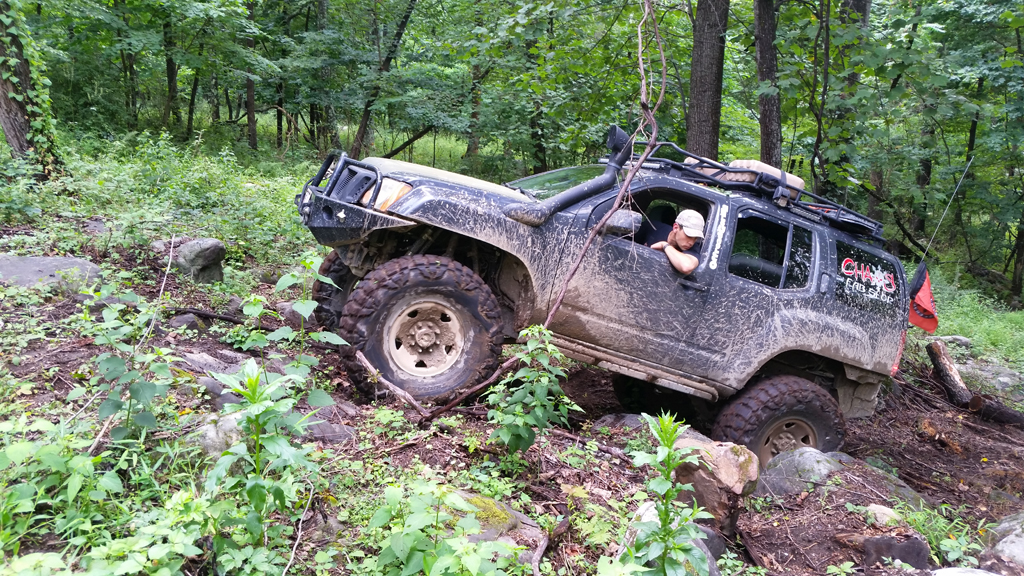 The other big excitement came when Wade was trying to navigate through some rocks and trees. I suspect he didn’t mean to hit the gas as hard as he did but from two vehicles back we heard him gun it and fly 1ft forward into a tree! When we got back down to camp him and Angel were out checking out the damage, a cracked weld in his front bumper and also maybe some dented sheet metal around the one headlight that was pushed back in. Oops!

All in all though we had a great day. Thanks AK, Maria and John for having us again, next year we’ll have to come back more often!