Since CORE is comprised of people that enjoy getting out away from it all it generally isn’t too hard to find folks that would rather spend Black Friday wheeling than risk their lives at a Walmart! This year was no exception. I proposed a trip to Rausch Creek Off-Road Park for a day on the trails and we got a pretty good sized group.

Lucky for Robert the door seals did their job and he was able to climb through the sunroof to the hood to toss his already attached recovery rope to us on the mainland!

With such a large group, and people coming from all over due to Thanksgiving celebrations away from home, only a small group convoyed up together, with the rest of the group meeting at Rausch Creek. It was a cool overcast day and the park was only lightly populated. With a bunch of guests and those new to Rausch it took a little longer than usual to get paperwork filled out, tires aired down, and sway bars disconnected. Eventually we had a brief drivers meeting, and then headed into the park. 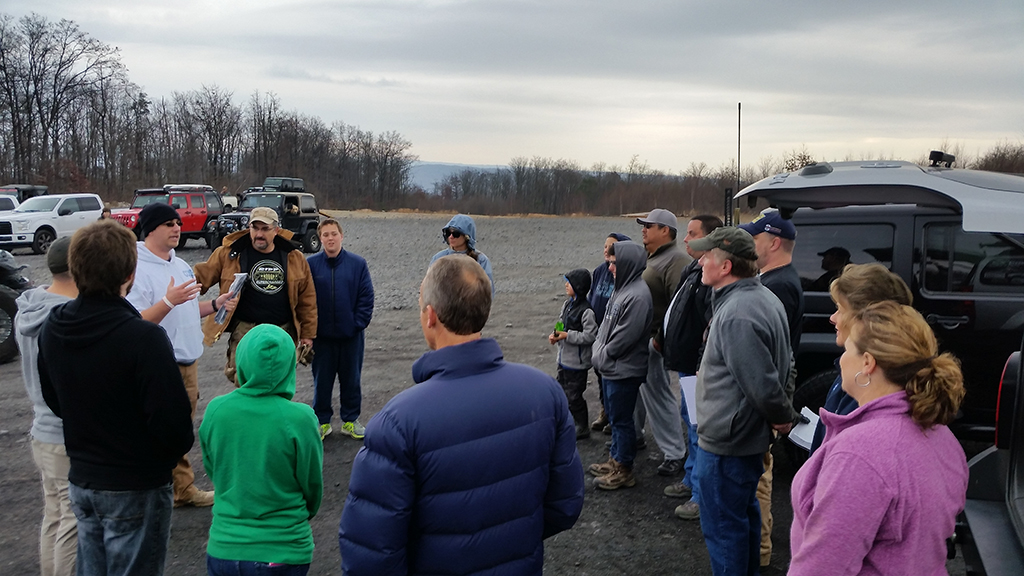 We had a pretty diverse group this trip, from the Cherokee and stock Wranglers, to the lifted JKU’s on 35’s and 37’s, new-to-wheeling folks and several veterans. Robert was itching to continue pushing all his recent upgrades to the 4Runner! It also was a special trip for Cherie and I because our friends Kathryn, Linda and Alan were able to come along. We talked Kathryn into getting a Jeep a few months ago as an excuse to get out and meet good people in her new home in Indiana. She got the Jeep, found a club, and had been out several times, but I was looking forward to showing her more of what her Jeep could do!

We headed east out of the parking lot onto a few of those trails with optional lines on the side of the park. It was a good way for me to feel out the group and see what everyone’s comfort level was, as well as get a feel for vehicle and driver capability. After getting out to spot people over a few of the more exciting obstacles we got near the end of A. I mentioned that folks could take the harder black lines up to the top of the hill, and that I would lead the group around the easier way. Robert took the hardest line available, got stuck just once, but with his newly installed lockers was able to get himself going again! Robert arrived at the top of the hill with a big smile on his face, and a small dent to the rear passenger door, but that’s the beauty of owning a new 4Runner, this one is now his toy! 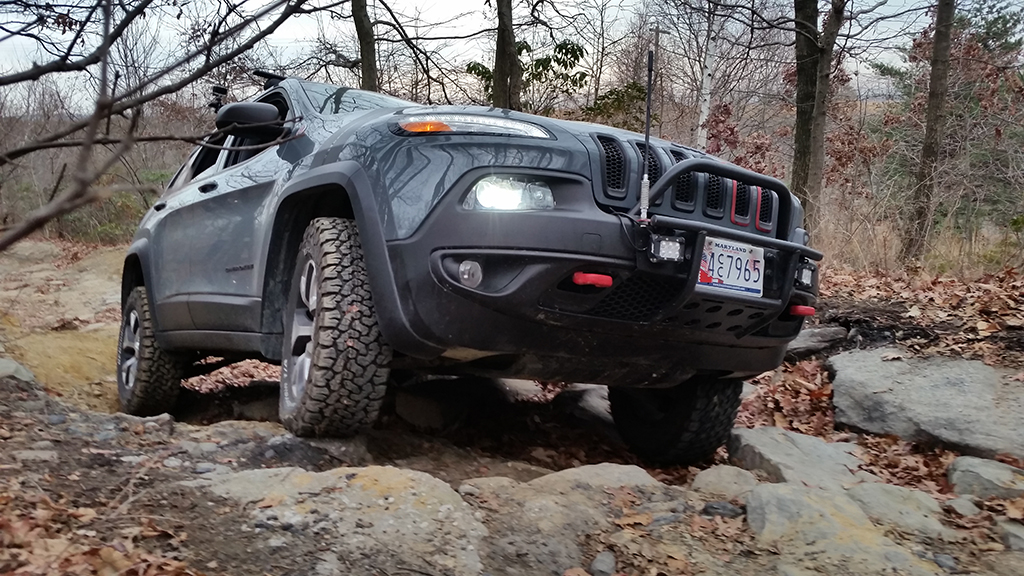 After we all regrouped at the top, a few others took more exciting lines too, we walked through the trail nearest to the top of the hill. It looked more rutted out than in the past, but I thought it would be fun for everyone, and after the first “gatekeeper” obstacles there were some optional lines that included one large deep rocky hole that I thought John or Mike may want to try. 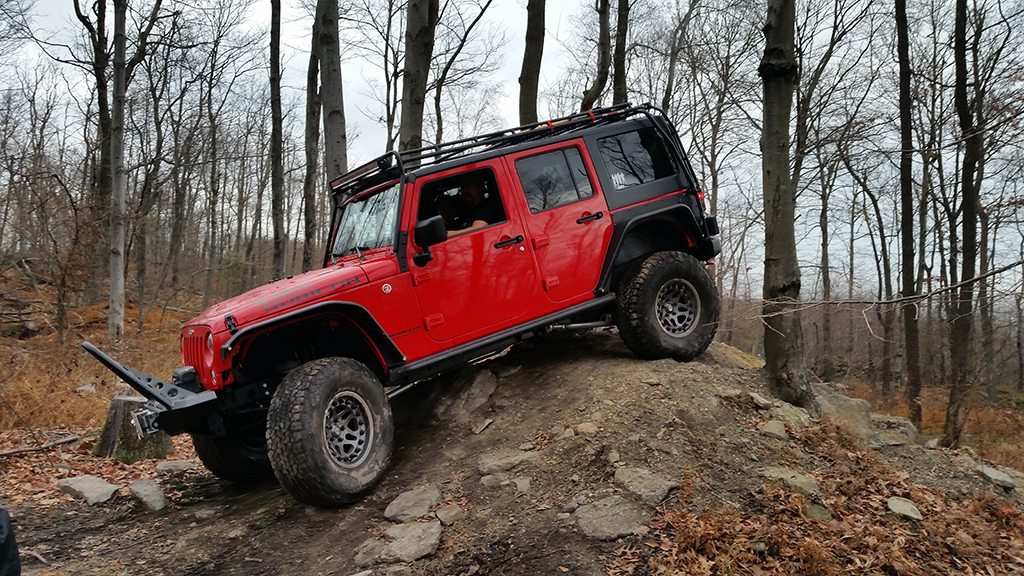 Because of our late start and intentionally walking through these obstacles, it was already lunchtime and we were still right next to the parking lot. I chose to lead the group back to the parking lot for lunch, providing an unique opportunity for a mid-day bathroom break. While we all ate lunch Robert discovered that one of his tires had a hole in the sidewall. Around the same time Kathryn realized her big tires which were contacting her fenders when flexed, were actually bending the fender sheet metal as well. As she weighed the option of removing the plastic fenders, and Roberts tire swap was taking longer than expected, I decided to encourage half the group to go on and have fun. We had a large group and two smaller groups would move faster. Sam and Mike offered to take that group out once lunch was done, and I stayed behind with Robert to guide the 2nd group once we got done. 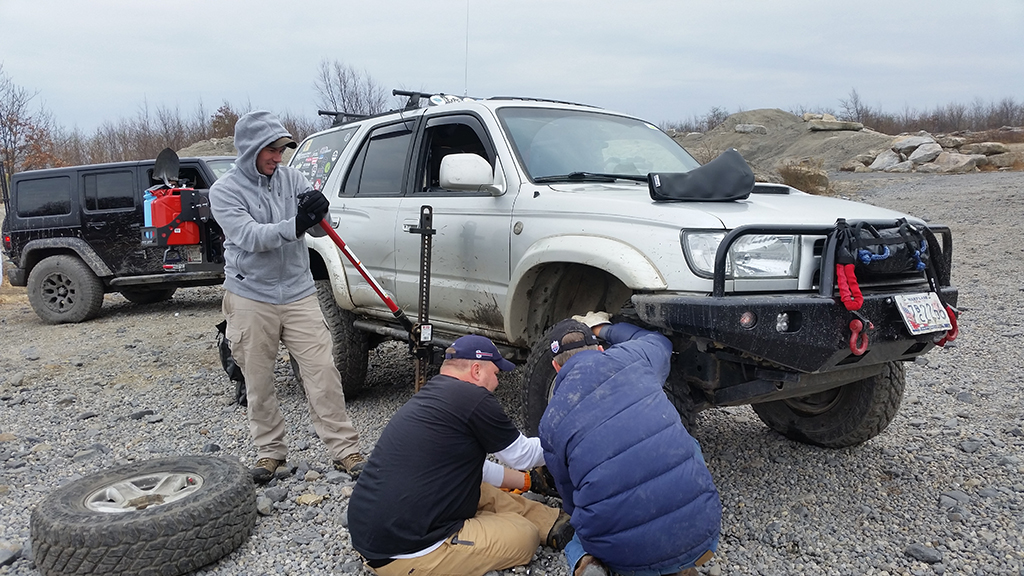 Once back on the trail we thought we would catch back up to the first group, but I also discovered a low pressure tire which slowed us down. Then when we got on Pole Line Robert decided to go for the deep side of the big puddle at the bottom! The enthusiasm was there, but the 4Runner didn’t quite make it the whole way through. Lucky for Robert the door seals did their job and he was able to climb through the sunroof to the hood to toss his already attached recovery rope to us on the mainland! A quick tug and we had him out of the hole in no time. I’ll also add, Alan was so impressed with the recovery rope, he’s looking into getting one for his work for when they have to recover stuck farm equipment in the middle of a field. A synthetic recovery system should be far safer than the chain they’ve apparently be using. So thanks Robert for helping to set up that demo for Alan! 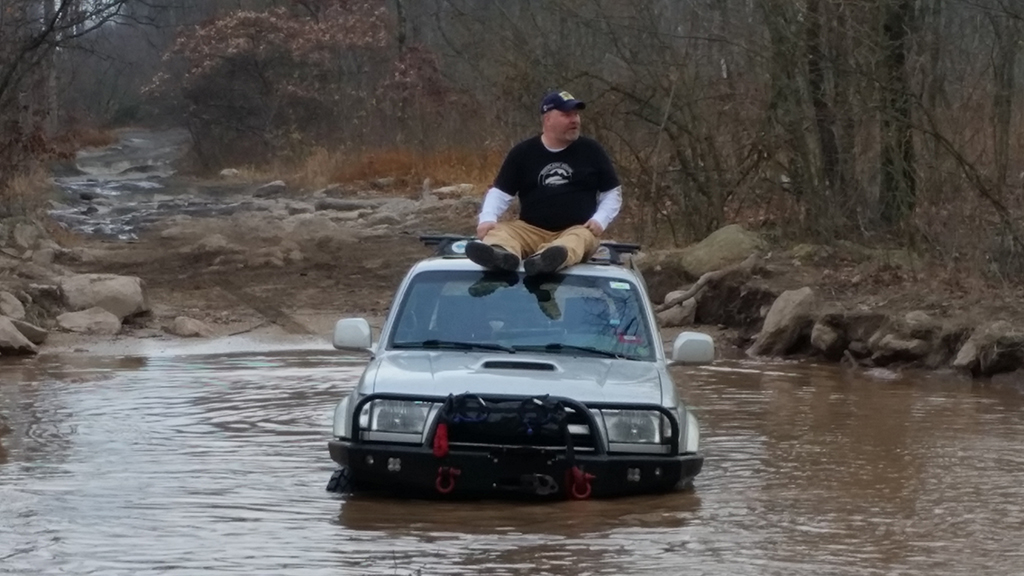 Robert stuck in the mud 🙁

After our two delays we were far from the other group so I called Sam and suggested we remain two groups for the rest of the day. It was at this time that I suggested he take trail 23. I heard at the end of the day that suggestion lead to him cursing my name about 23 times as that trail was apparently in surprisingly bad condition and caused no end of calamities for Sam and Mike’s group! Sorry Sam.

Our group continued on, looking for exciting trails for our diverse range of vehicles. We hit 14, always a crowd pleaser, 11, 11-B and Power Line. By this point it was late in the day and we needed to start headed back. We took the “shortcut” near the top of Pole Line that connects to the 101 trail. It’s a great little side hop for those that haven’t tried it. As we waited for Robert, our tail gunner, two other Jeeps came up the trail. They were driven by Shawn and Keith, two drivers that fell in with us last year for our Black Friday run! Keith said he recognized our group as we passed and wanted to catch up and ride with us. I passed him a card and reiterated some info about CORE, he said he’d probably reach out soon to get on the listserv. 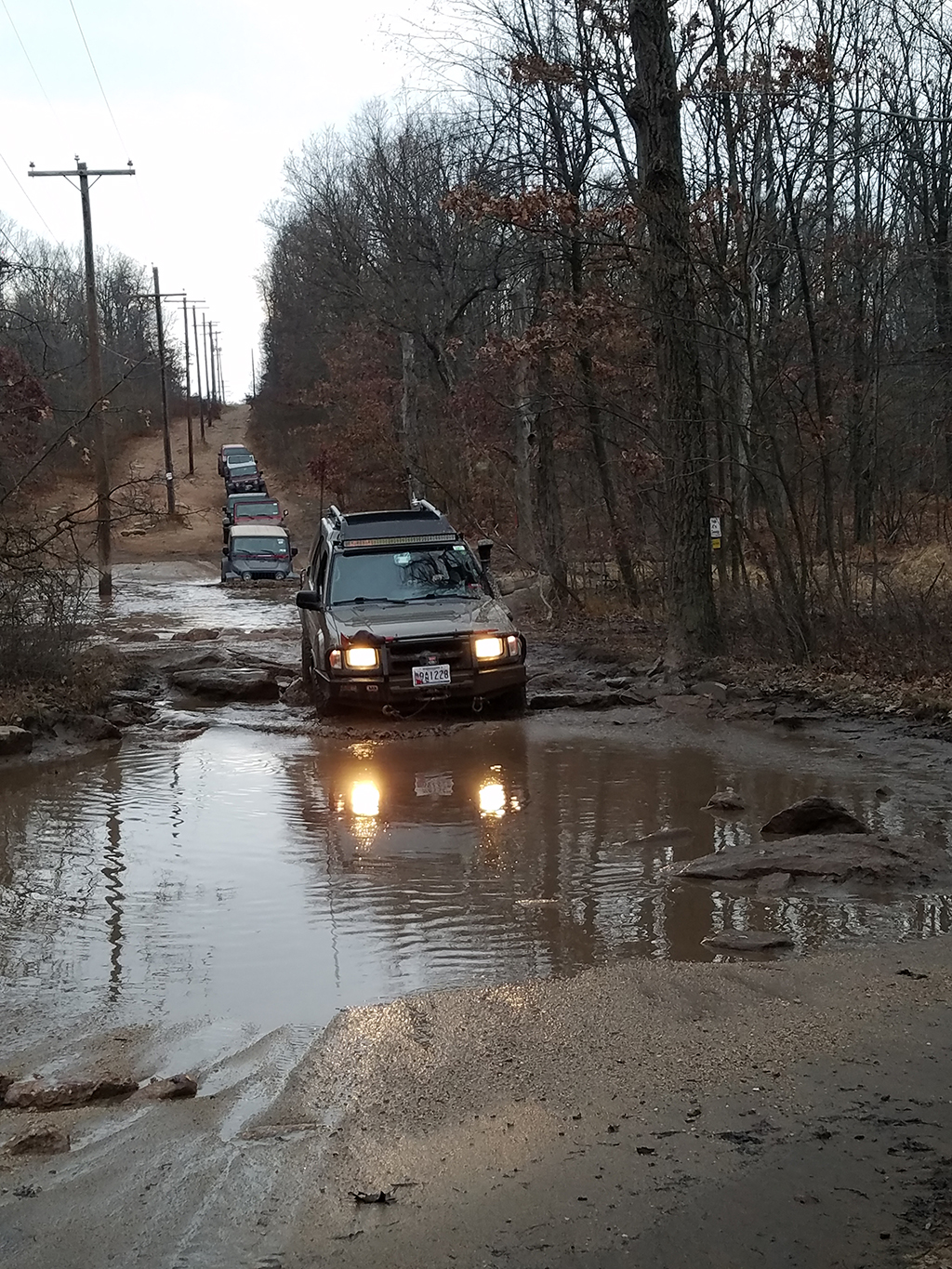 Heading back through the mud!

With our expanded group, and Robert at the top of the hill, we continued on, heading to E, then B, and eventually onto 1. Trail 1 can be a little unpredictable with it’s submerged rocks and various forced lines. It was slow going for some in our group, but other than one or two spots where spotting was required, we made it through without issue. We came back out on D, and most opted to skip the optional “puddle” at the bottom of Pole Line this time. We headed back to the parking lot right around 4:45, just in time for everyone to go in and get their new member passes.

As we all aired back up in the parking lot, and got our vehicles ready for the road, we decided to head over to O’Neils for some good food and some more time with the group. Most people opted to participate and get some food. By the time we all left O’Neils (which had another large group there that slowed everything down a bit) it was cold and dark outside. This Thanksgiving I’m thankful for getting to be a part of such a great club!

Video of our day, thanks to Hope Metzler!