Andrew couldn’t lead the Black Friday trail ride so I volunteered. When the leaves are off the trees you can see rock formations better and hiking is easier. The plan was to meet at the Garrett County Visitor’s Center in McHenry, MD on Friday morning at 10:00 am, caravan to the Turpin Tree Farm, drive around out in the woods and call it a day. On a good day it is a 3 hour drive from the Washington, DC area to McHenry, MD. Met Buzz and Kirk at the Visitor’s Center a little after 10 am.  Gave them written permission to be on my property and also got a “Release and Waiver….” form from Kirk. Thanks to Andrew and Buzz I found out that only Club Guests need to provide the form. Left the Visitor’s Center at 10:30 am and we drove to just South of Sang Run, MD on Oakland Sang Run Rd. Stopped along the road where we could view the West side Upper Ford Hill and get the big picture of the property.

Toby drove his 2014 Jeep Cherokee Trailhawk with Bridgestone Blizzak tires, Buzz drove his 2014 Jeep Rubicon and Kirk drove his 2010 Toyota FJ Cruiser. Kirk had 40 PSI in his tires so he definitely needed to air-down. Unlocked the gate at the County Road Trailhead and we drove on the gravel fire trail to Tower 356 which is where the gravel ends. Then we drove up the Power Line Right of Way to the top of the hill. I have to use Select Speed Control, rear locker and rock mode to creep to the top. When we got to the top Buzz and Kirk parked their rigs at 63FTI. (The number identifies the intersection and FTI is the acronym for Fire Trail Intersection).

Some people stayed at my cabin and put out a bird feeder, the next morning it had been destroyed by the bears. This is still wilderness not the big city!

Buzz and Kirk hiked down the fire trail towards the landing (09LANDING). (63FTI to 10FTI) Refer to Buzz’s report below. I drove back to the wrecked camper near the landing and waited for Buzz and Kirk to find and ‘flag’ the fire trail with yellow surveyor’s tape from the top of the hill to the wrecked camper. I tooted my horn every so often to give them an idea where I was parked. We were able to communicate with our hand-held CB radios. They finally got back at about 2:30 PM?

There are several places on my property where you could have PRIMITIVE camping on level ground. Not only that but you need to be prepared to defend yourself from bears and coyotes. Some people stayed at my cabin and put out a bird feeder, the next morning it had been destroyed by the bears. This is still wilderness not the big city!

After I transported Buzz and Kirk back up the hill to their rigs we drove to the summit of Upper Ford Hill (elevation 2901 ft) and took a picture of our “rides”. Buzz displayed the CORE flag on his Rubicon at the summit so Upper Ford Hill has been officially conquered. 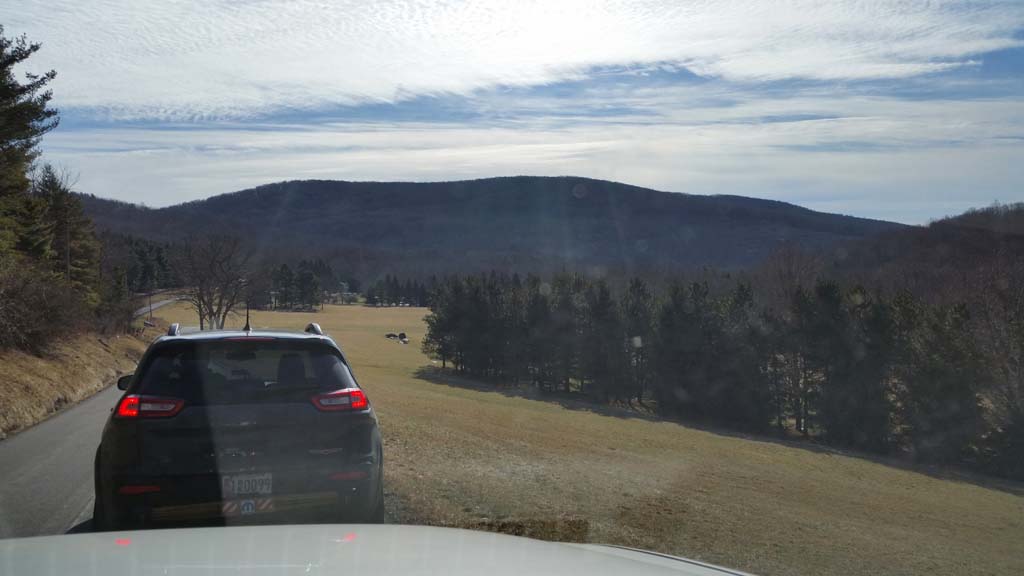 Ate lunch in the cold East wind (29 degrees F per my Trailhawk) and drove South and West back to Tower 359 and then down the Power Line Right of Way to the gate at the County Road Trailhead. The Black Friday Run was concluded at 3:37 PM.

According to Toby’s recollections from 50 years ago:

Really steep hill W from 63FTIntersection. There is a large rock on the N edge of the trail that is 93′ W of 63FTI. W from the large rock the fire trail goes down hill at about a 40° angle for about 150′. The trail is covered with leaves that will reduce traction. At the bottom of the steep part the trail turns to the left. Near the property corner there is a deep rut. The 10FTIntersection is not readily  visible. This is a good trail for a Polaris 6 wheeler. Trees will need to be cleared from the trail.

Hopefully BuzzV and Kirk can update the description based on their hike.

I would like to keep the Trail Guide current so it will be useful for future events.

BuzzV says he can easily drive down the steep hill from 63FTI, turn around and get back up the hill. Apparently the leaves give more traction than bare ground. He also mentioned a difficult spot somewhere.

Buzz Vogel also offered the following account of the day:

So just want to follow up from our Trek to Toby’s Tree Farm in Garrett County. It was a beautiful day, no rain, no snow, temps in the mid 30’s. Kirk Montague, Toby Trailhawk, and I (Buzz) met at 10 AM at the Garrett County Visitor Center in McHenry, MD. Toby and Buzz looked over the topo map and talked about some of the things Toby need to accomplish with the property. Once Kirk arrived and after getting fuel and food at the corner gas station headed to the farm. We were greeted by a couple of deer and a rather large flock of Wild Turkeys as we started up the road to the power line. After climbing to the top of the hill, up a mostly clear 30* incline, Toby showed us where an old logging road went down over the side of the hill and had overgrow a bit over the last decade since the last Logging Operation ended. After a brief discussion Kirk and Buzz geared up with surveyors tape, machete, utility ax, hand saw, map, and GPS trackers. We were able to find the mostly clear trail down the hill and across the mountain for about a mile where we hit the heavy overgrowth of brier and fallen trees. Eventually we made it to the last turn and headed toward Toby’s Trail Hawk but when we found what appeared to be a much clearer tail well we just had to explore. This new trail cross back across the mountain all the way to the far property line and was in excellent shape. We took time to explore where the property line headed back up the hill and discovered that it just may be possible to cut a new trail/road up to the original trail easier than clearing the old trail. That will have to wait for spring though as we exhausted all our energy for the day.

After tracing our way back across the “new” trail we finally headed down to Toby’s position where he was waiting to take up back to the top to retrieve our rigs and explore the top of the mountain a bit.

Who would be interested in a camping trip to the farm for a little road lay out and clearing next spring?