Once again Larry Pope set up a volunteering opportunity for Mid Atlantic Four Wheel Drive Association to take place in Green Ridge State Forest (GRSF). CORE has had members in attendance to every one of these opportunities since their inception in the spring of 2013 when Larry was the CORE President. As often happens what was expected to be a bigger crowd dropped drastically at the last minute due to lifes complications. But still in attendance were the following.

The holes had been pre-drilled but the work was fun in the sloppy mud.

Larry, Berna and Alexis got to camp Friday afternoon around lunchtime. Cherie and I arrived just before dark to maintain our reputation of always setting up our tent in the dark. After getting settled in and hearing about Alexis’ “squatch hunting” during the afternoon we all called it a night in preparation for the work to be done on Saturday.

Through the night we all enjoyed the sound of steady rain on the roof of our tent and trailer. In the morning around 8:45 Robert, Fred and Trudi arrived at our camp. At about 9am Mark Beals, GRSF Manager, arrived to chat about the days project, show us an Eastern Box turtle he’d pulled off the road, and lead us to our work location. Our work would occur on some newly purchased property that GRSF had recently acquired. The drive to our work location was longer than in the past, taking us about 30 minutes from Group Site 1. 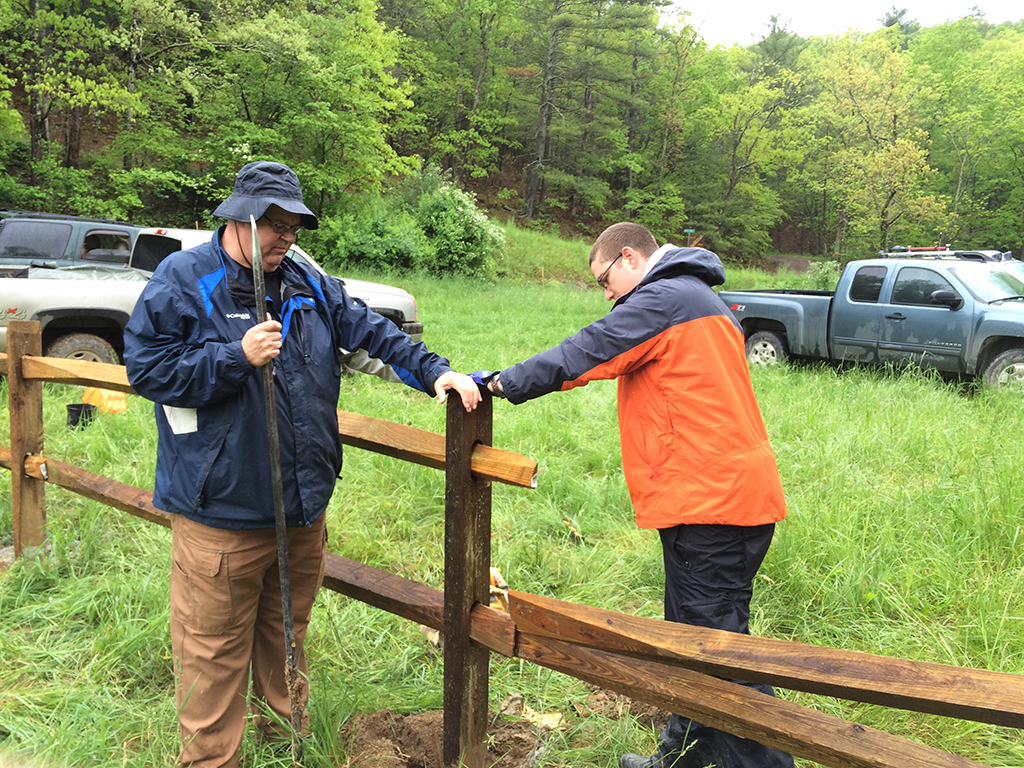 We had two projects to complete for the day. The first was to build a new split rail fence on either side of a new gate. The fence would help to define a new parking area that visitors will be able to use when entering this part of the property to hunt, hike, or just come out to enjoy the large field. The holes had been pre-drilled but the work was fun in the sloppy mud. While some of us set to fence building others planted trees. Project number two was planting Eastern Hemlock and a type of hardwood. The hemlock is currently being attacked by the Hemlock Wooly Adelgid and so GRSF is putting extra effort to combat this pest as well as ensure there are still healthy hemlocks being added. 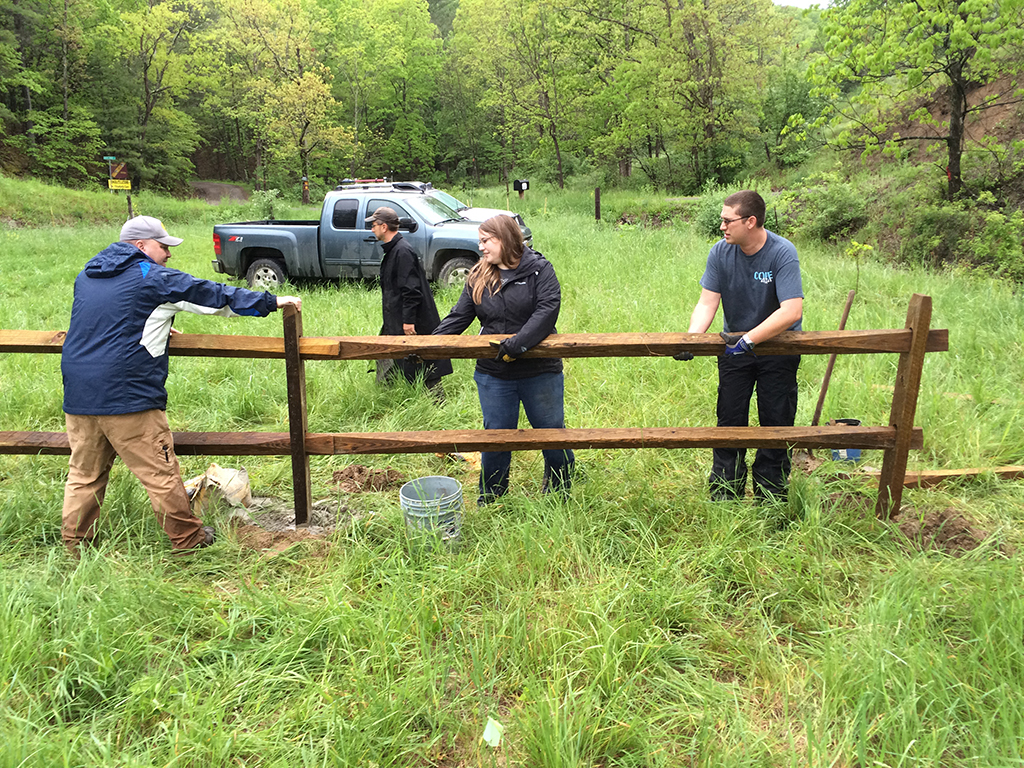 The fence building proved to be an interesting project. Some of the holes spacing wasn’t quite right requiring us to either move the holes or to pull out a chainsaw to shorten the horizontal fence members. We ended up employing both methods at one point or another while assembling the fence. All of the vertical posts were fixed in place with concrete that we mixed on site. Most of the holes had enough water in them from the rain we just had to add the powder! 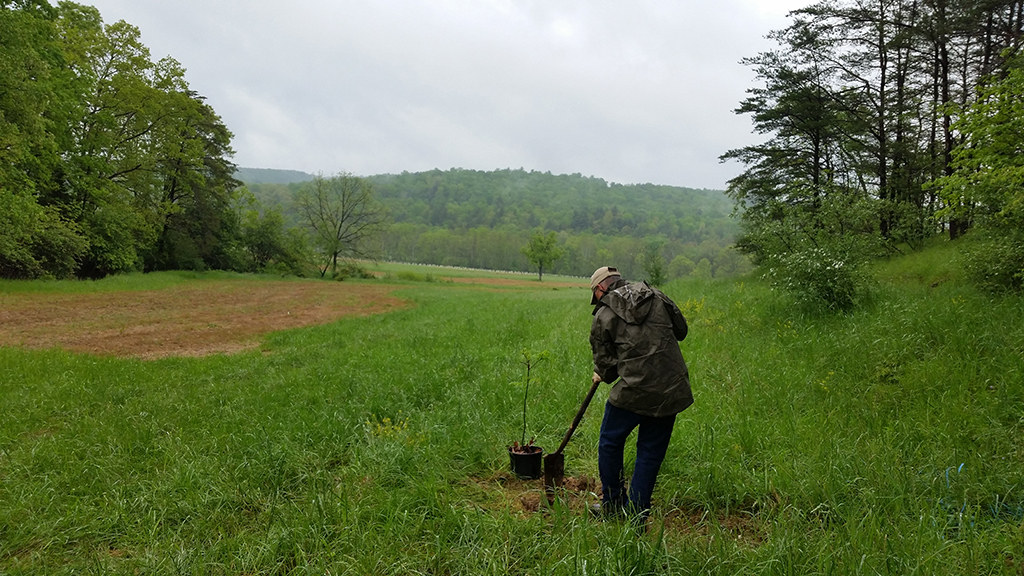 About the time we finished the fence the last trees were planted. We all set to adding mulch to the bases of the new trees. It was about noon, and so we thanked Mark for the opportunity, packed up the tools back into his truck, and parted ways with the MAFWDA crew heading back to camp. Back at camp Robert and Fred hung out for a few minutes before heading out to get lunch on their way home, possibly at the new Oak Barrel Cafe at exit 72 on I-68.

After lunch Cherie and I headed out on our own for a bit just to drive around and enjoy a little bit of Green Ridge (and to get out of the rain for a bit). With conditions as wet as they were, and us wheeling alone, we decided not to risk getting stuck on Twigg Road. That being said, we discovered Gordon Road which turned out to be a fun little drive. Nothing a stock 4×4 couldn’t handle, but still fun! When we returned to camp Larry also mentioned that he’d recently done Piclic Road for the first time, and when it was wet and muddy it was quite the hill to try to climb. Next time.

We relaxed in camp that evening and parted ways Sunday morning. Larry and Berna were just hooking the trailer up to the truck when we headed out. Cherie and I took the scenic route by way of some of the overlooks on Oldtown Orleans Road on the east side of the forest. We stopped for lunch at the Oak Barrel Cafe to discover Larry, Berna and Alexis just leaving. The food at Oak Barrel was apparently a good way for all of us to finish off our fun weekend!