Red Cloud Off Road (RCOR) is the closest legal wheeling spot to the DC Metro area. Unfortunately they had to close down for about a year due to some issues that we won’t go into here. CORE was at Red Cloud last year on their last day open, but we didn’t know that when we were there for our trail day and meeting. Fast forward to 2016 and they have opened their doors again for events on certain weekends. We managed to get out there for their 2nd event since reopening and had a great time! It was great to see the same familiar faces. In attendance for the fun this time: 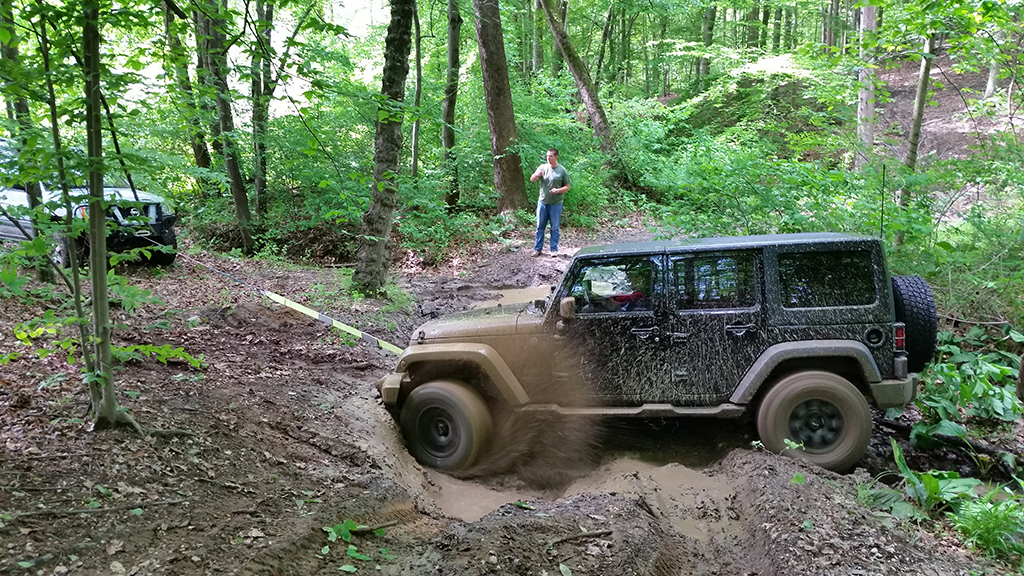 Sam stuck in the mud.

We went right at the end of a record spell of rain to the DC Metro region. We had approximately 20 days straight of rain, and as a result of that parts of the park were very muddy! We quickly found this out as we headed onto our first trail of the day after airing down in the parking lot. The first hill I attempted I couldn’t drive up. No amount of tire spin or speed seemed to be able to get me up the hill.

Unfortunately he had dug out a pretty big hole with his tires, and as I entered the hole at an angle with a little bit of speed I jammed my front drivers side tire deep into a big rut sideways, and blew the tire right off the wheel!

The base of the hill was covered in deep thick mud, but maybe my tire tread is finally getting a little low. We decided to turn around, and that’s when the fun began.

Fred and Robert managed to get the 4Runner back up the hill behind them. But in an attempt to turn around in place Sam managed to get helplessly stuck in the other large mud hole in the valley, perpendicular to the usual direction of travel. To get him unstuck I had to turn myself around in my mud hole, then get up a little into the woods to winch him up out of his mud hole! We managed to do this without any drama (other than a small dent to his stock front bumper) but eventually he too was up on dry land next to the mud hole. Then it was my turn to try to go up the hill through the same mud hole we had just pulled Sam out of. My absence would leave room for him to turn around. 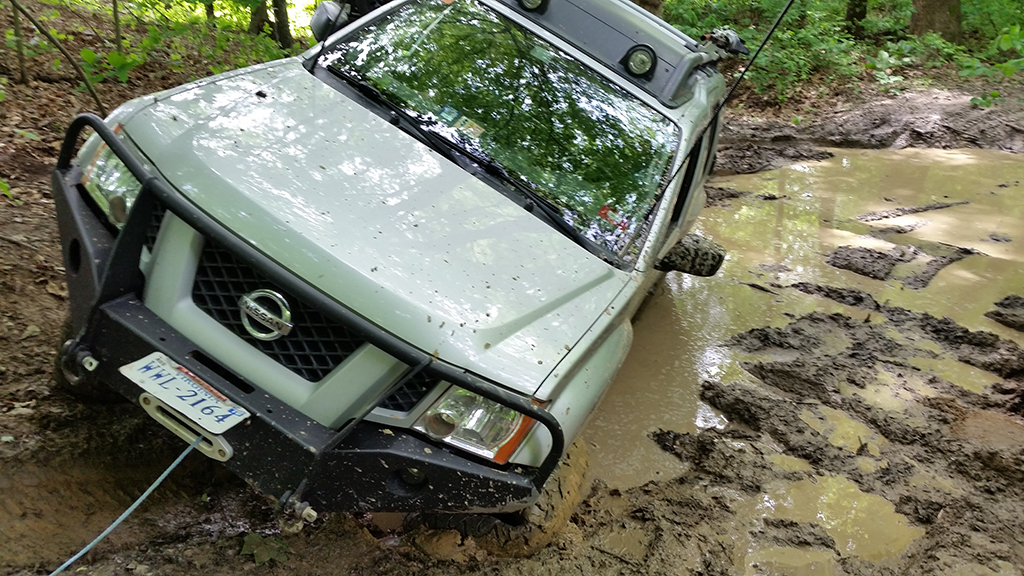 Andrew & Cherie stuck in the mud!

Unfortunately he had dug out a pretty big hole with his tires, and as I entered the hole at an angle with a little bit of speed I jammed my front drivers side tire deep into a big rut sideways, and blew the tire right off the wheel! Cherie, sitting in the passenger seat at the Xterra came to a violent stop at a pretty off camber angle in the mud hole, calmly asked “Are we going to roll over?” to which I replied “Not if I’m careful!” The tire and wheel were deep in mud and so we decided to try and drive to the top of the hill before a repair. Unfortunately the mud was too much for me to drive out of, so Robert and Sam hooked up our winch cable to a tree at the top of the hill and we winched half way up. At the top of the hill Sam joined us, and we spent a little bit of time swapping the tire for the spare. It took Cherie 10 minutes just to dig the lugs out of the mud so we could take the wheel off! 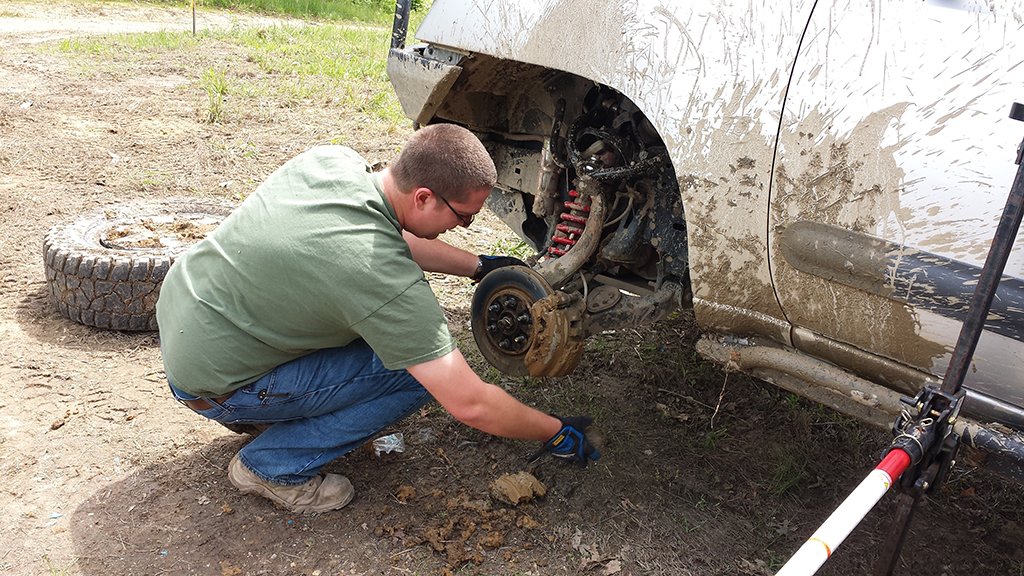 After swapping tires we continued on. We basically decided that as muddy as that first trail was we would avoid the easternmost section of the park which historically we had already seen was muddy in normal conditions. With the rest of the park to explore though we went on to check out most of the other trails. Just before lunch we crossed a concrete water crossing and the 4Runner hit both the front and rear bumpers. A few minutes later when we stopped for lunch we realized that Fred had managed to dent the front bumper in a bit and in the process rip the front license plate entirely off! The tailpipe at the rear was also a little more oval than it had been! After lunch we retrieved the lost license plate without issue, but all had a good laugh at the unique trail damage. Who needs a front license plate anyways! 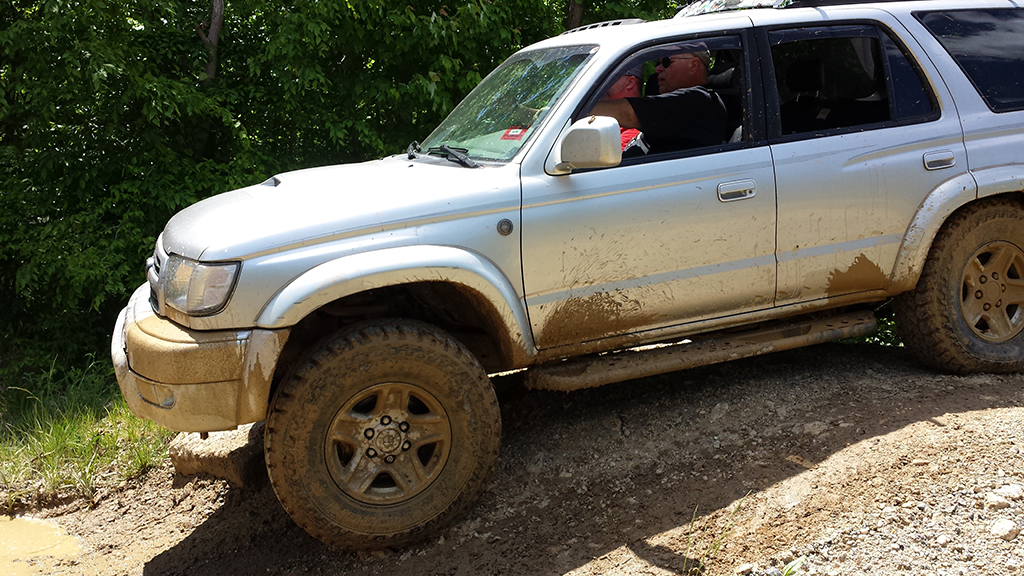 Fred driving on the moguls

We enjoyed lunch near the entrance to the park where several other vehicles and owners had also chosen to enjoy lunch. I got to meet the owner of a really awesome Xterra build that I’d seen on the forums, nicknamed La Rana. Apparently the owner had put about $30k into it and then sold it, not to wheel again for several years until just recently when he picked up a Wrangler. Small world, I’ve seen that massive build for years online and it never occurred to me he could be a DC local! Anyways, after lunch we continued enjoying the trails until about 3pm when we realized that some big angry looking clouds were descending upon the area. We decided to call it a day and head back to the edge of the parking lot to air up. Just as we finished airing up the heavens opened and so we quickly said our goodbyes. But we’ll be back to Red Cloud, it’s a great place for some easy access to dirt and a way to scratch that itch!