Wheelin’ for Hope has become an event that CORE members look forward to all year. It is a two day guided off-road experience held annually at the Oak Ridge Estate in Arrington, VA on 40 miles of off road trails. Rigs from hardcore trailer queens to bone stock 4×4’s all tackle the same trails with optional side obstacles for those looking for a challenge. It’s a neat way to enjoy the trails with a variety of vehicles and people of all backgrounds and skill levels! Proceeds from the event, hosted by the Relay for Life of Nelson, Virginia, go to the American Cancer Society. Attendees from previous years have a chance to register for the 200 open slots before registration is open to the general public. Last year, it was sold out in one week after registration was opened to the general public, but this year it was sold out in just 17 hours!

Andrew & Cherie were wedged between a rock and a tree next to V-notch and needed to be winched away from their predicament.

Of the 200 vehicles on the trail this year here are the CORE Attendees:

There were three firsts this year for us at Wheelin for Hope.

1. Robert’s dog, Trudi, was going for her 1st “hardcore” trail ride. Trudi has gone camping once before and trail rides at Assateague Island National Seashore and Green Ridge State Forest.
2. Robert had a new 3” lift and tires for the 4Runner.
3. I was going to be the driver for this event. I have driven “off road” on The Shoe Creek Trail in GWNF, CHAOS Off Road Park, Green Ridge State Forest and on Assateague Island (sand). This was going to be an experience!

We had decided prior to arriving to set up our camp at the lower end of the field, but not at the very bottom as the last two years. Last year we found that the water does run downhill (right into that campsite) and the drive lane turns to sticky, gooey mud just outside of our tent door when it rains which makes it hard for vehicles to navigate the turn. Robert & I arrived at 4:00 PM and set up our tent and canopy. Andrew and Cherie arrived at 6:45 PM and set up their tent and canopy. Robert prepared the evening meal of ham steaks and beans, while Andrew and Cherie supplied the potato salad and slaw. We were joined by Bryan, a friend of Andrew’s from VA4WDA.

We woke to a light mist on Saturday morning, had breakfast and headed to the staging area. Andrew & Cherie had to check in at the registration booth. We chose the shortest line (#2), aired down and waited for the drivers’ meeting to start at 8:00 AM. At the conclusion of the meeting the free items were thrown into the crowd (Andrew caught a T shirt!) We were now ready to hit the trails! 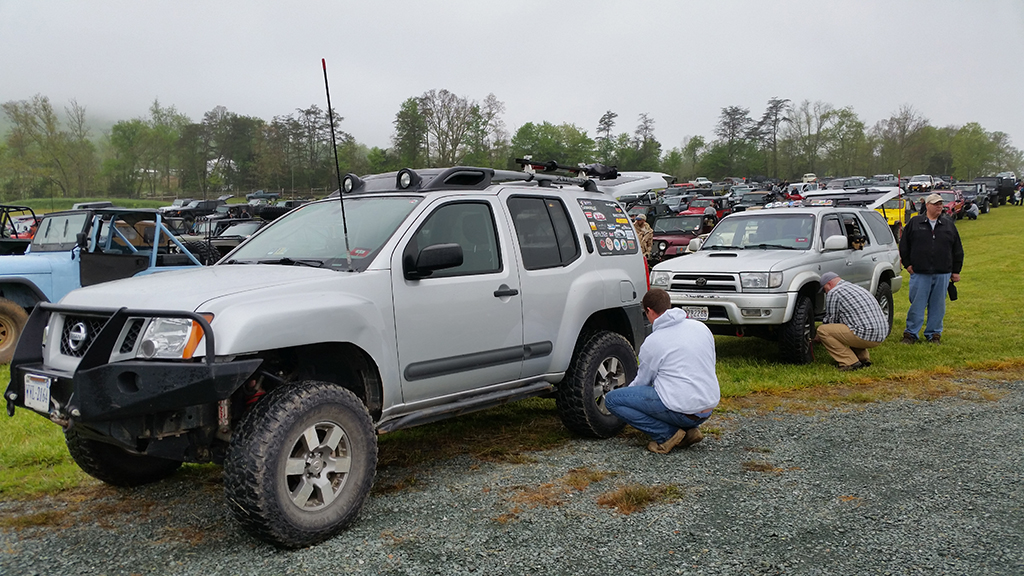 The groups (there were 10) that had the most distance to travel left first. Since we were closer in we were the second to last group to leave the staging area. Our first trail was only about a half mile from the staging area, so we were there quickly. As we entered the trail, shifted into 4WD low and away we go! Oh, did I mention that I was driving Robert’s 4Runner, as the Tahoe would not fit between the trees! Surprisingly the trails were not real muddy and a fun time was had by all. We had to give a tug to one person to make it up a hill and we needed a tug to make it up a muddy spot on a hill that afternoon. Andrew & Cherie were wedged between a rock and a tree next to V-notch and needed to be winched away from their predicament.
We were back in the campground around 4:00 PM, and waiting on dinner at 5:00. Dinner this year consisted of “pulled pork” with slaw, chicken, baked beans, potato salad and dessert. Usually they have hot dogs, burgers and chicken. 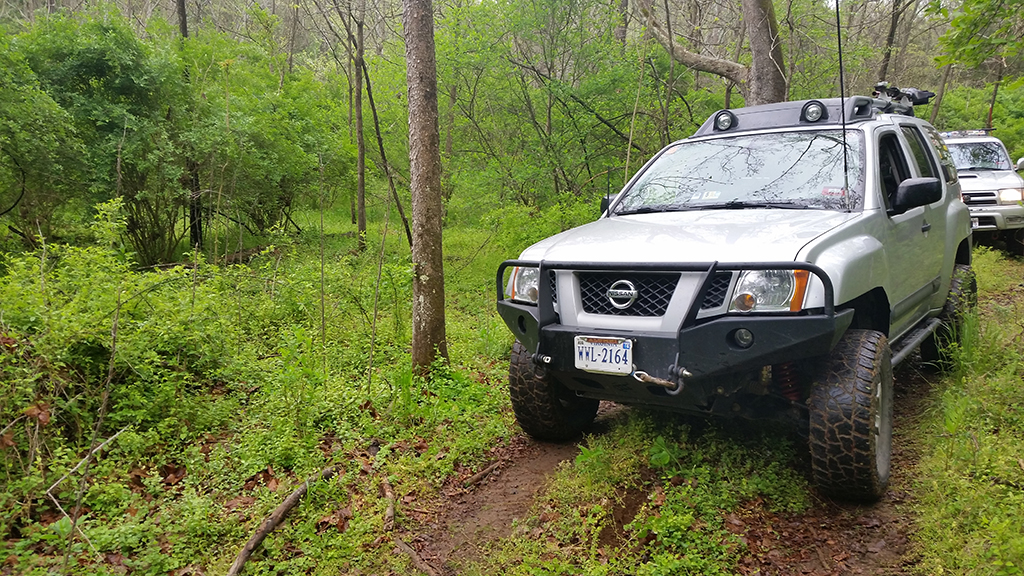 Driving through the woods

After dinner the raffle started and it started to rain. There are hundreds of prizes available for the raffle. The main prizes are 4 winches and a certificate for $500.00 towards Mickey Thompson tires. The raffle tickets are sold for $20 a wingspan (yours or the ticket person, whoever has the widest.) The money for charity comes from the raffle (all items are donated.) CORE members in previous years have won items (Hi-Lift jack and recovery gear last year), but this year we did not, but the money is going to a good cause. The main portion of the money raised for “Relay for Life” comes from this raffle. From 2009 to 2015, Wheelin for Hope has raised $85,000.

The rain lasted all night. (the running joke is that Wheelin For Hope is held on the first rainy weekend in April every year.) While having breakfast we decided to not go on the trails today as they were going to be very, very muddy and slick. The rain finally let up at about 11:00 and we broke camp. 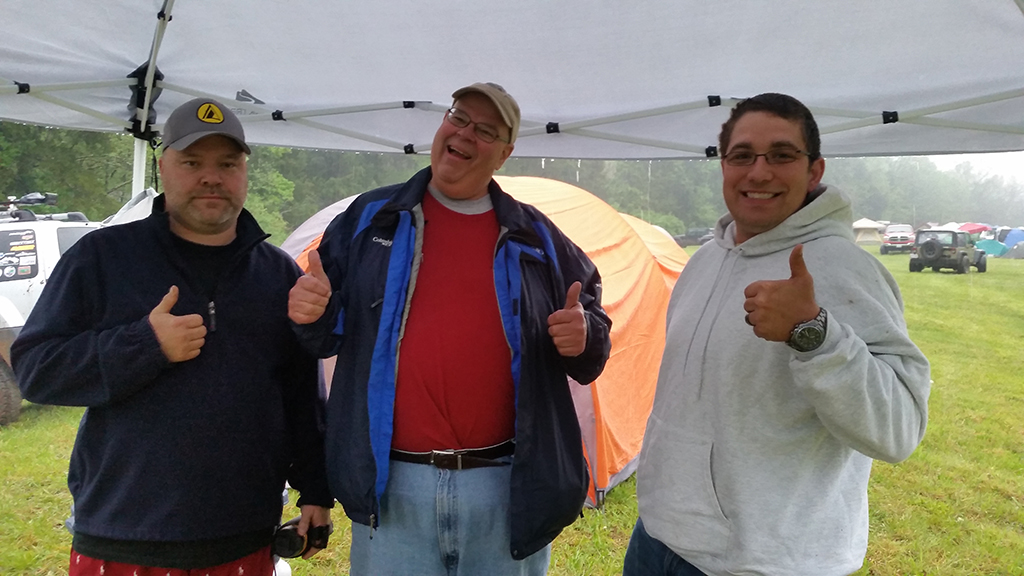 Very happy about the rain!

Last year the mud was bad in the campground. This year there were not as many campers and most of them were in the upper portion of the field, so the area we were in was not muddy like the upper portion. The Tahoe had street tires last year and had to be towed up the hill by Kevin. This year the Tahoe made it up the hill with the help of BFG AT KO2’s without an assist.
This year Wheelin For Hope raised $16,000 taking their total since inception to over $100,000!