We’re always looking for new places to legally wheel and explore. We’ve done rocks, mud, and dirt and at Assateague Island National Seashore we had a chance to do sand. It about three hours from the DC metro area and just south of Ocean City in the town of Berlin, MD. This is the barrier island with the wild ponies. https://www.nps.gov/asis/planyourvisit/hours.htm. Seven rigs were able to make the trip.

Sitting inside a warm, dry cab was a fine way to enjoy the beauty of the waves and dunes.

We all live in different parts of the area, so we met just before crossing the Bay Bridge in Annapolis. After a rough start due to O’Grady’s poor mastery of his new GPS software, we caravanned to Berlin. The ride through the eastern shore is quite straightforward and very beautiful, even on a drizzly spring day. The park is located at 38o11’29”N, 75o09’30”W. We went to the National Park. There are also Maryland and Virginia State Parks with different rules and access. From our research it appeared the National Park allowed the most straightforward access. One thing to keep in mind, the park does not have day passes, only annual passes, which cost $90. 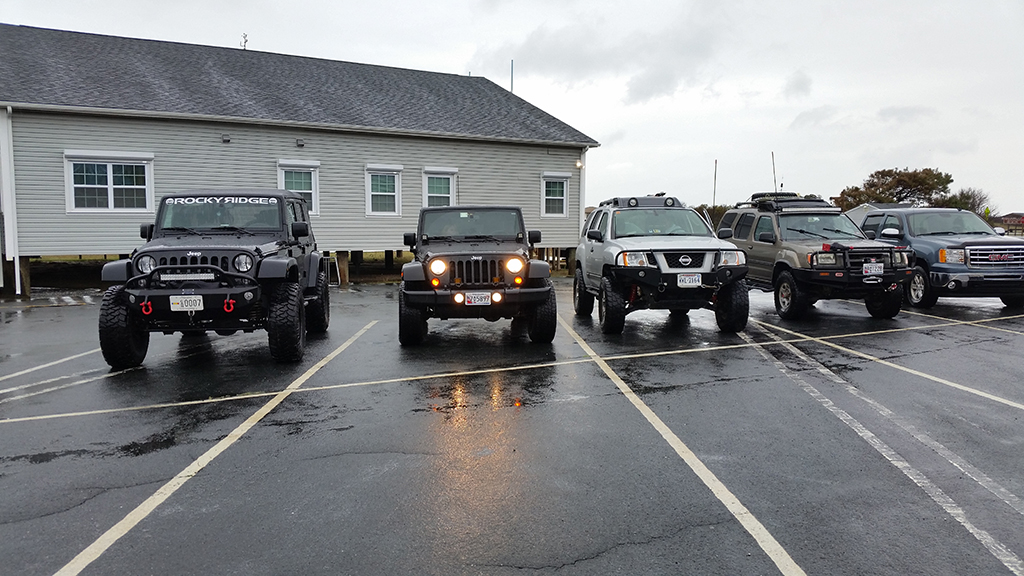 After airing down. I think most of us were at about 15 PSI for the sand. We headed onto the beach. There was some discussion about gearing, given that your engine temps can run high wheeling on sand. Some of use ran in 4-lo, but many in 4-hi. Bill Fay led the way given his greater experience driving on sand. It does take a little getting used to. Similar to snow, but a little more left and right slide in the steering.

The weather was mid-forties and drizzle so we had the beach pretty much to ourselves. Sitting inside a warm, dry cab was a fine way to enjoy the beauty of the waves and dunes.
About four miles in Andrew and Cherie started to have a little trouble and lost 4WD. They decided to head back to the parking lot and ride along with me (Mike). Very brave of Cherie sharing the back seat with my 100lb Rhodesian Ridgeback Brody. 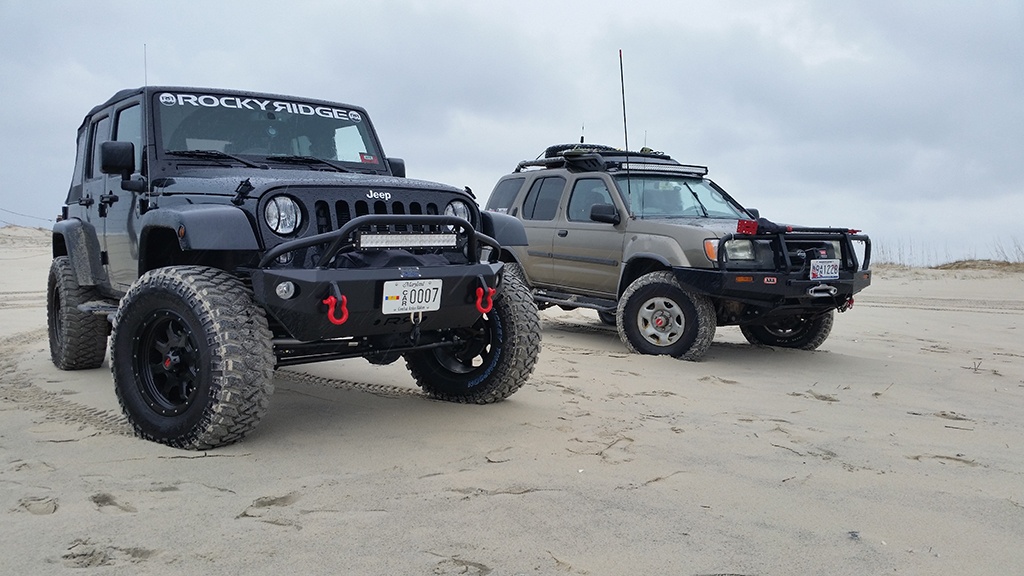 It was clear demonstration of why you need four wheel drive, as Andrew and Cherie tried to turn around to head back to the parking lot and got stuck pretty quickly. Bill Fay pulled them out and got them headed in the right direction, but his open loop recovery point had trouble holding the tow strap well enough for the tow back. I stepped in with a closed loop rear recovery point and we headed back to the parking lot.
We headed back out again and the run down the 12.5 mile beach was great. We were all better used to driving on the sand. We hit the Virginia boarder, which looked like something out of a D-Day movie with barbed wire and a no-nonsense fences and gate.

On the way back Fred suggested we do a little exploring down a couple of tracks that took us off the beach in into the wetlands. Quite nice, especially the second side track with plenty of wild life. No ponies spotted, but they had left little reminders that they were there. 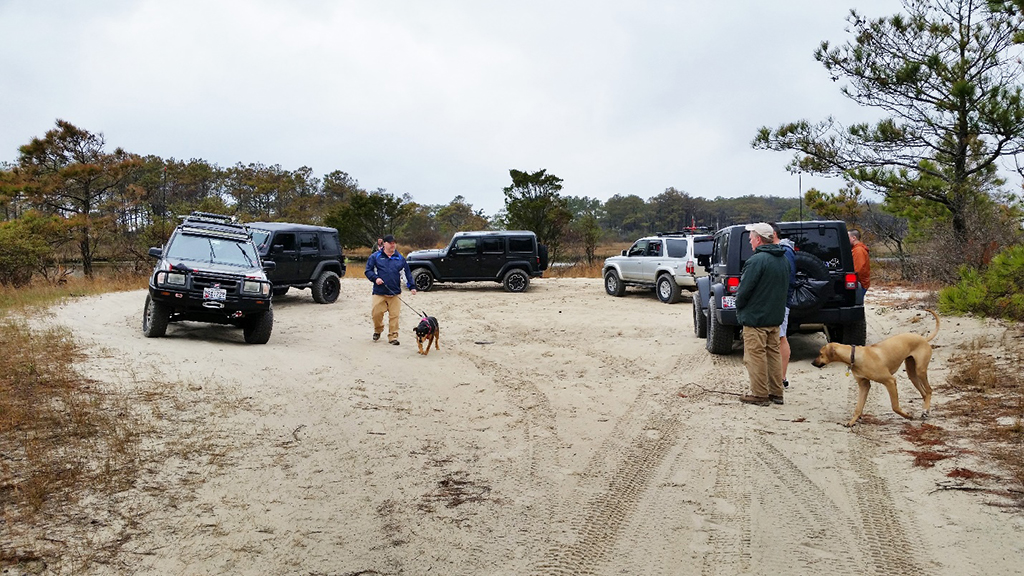 Checking out a side path

The ride back was fun and fast. We were all pretty comfortable with sand driving by that point. No one else got stuck and Andrew and Cherie wouldn’t have if their four-wheel drive hadn’t cut out. It was my first time on sand and it was fun and a great experience. You should probably still go with another 4×4 just to play it safe, but there was nothing about this ride that would make me hesitant to do again. We’ll probably go again later in the year. We wrapped up by 4PM, aired up and hit the road. A very manageable and fun day trip to the beach.