Mark Wilson got me inspired me to do an official CORE off road event on my Tree Farm. The plan was to meet at the Garrett County Visitor’s Center in McHenry, MD on Saturday morning at 10:00 am and caravan to the Turpin Tree Farm, drive around out in the woods and call it a day. On a good day it is a 3 hour drive from the Washington, DC area to McHenry, MD. Met Andrew and Cherie Taylor at the Visitor’s Center a little after 10 am and we drove to just south of Sang Run, MD on Oakland Sang Run Rd. Stopped along the road where we could view Upper Ford Hill and get the big picture of the property.

So I locked up my brakes and slid down the hill backwards. That was the scary part.

I unlocked the gate at the County Road and we drove on the newly graveled fire trail to the cliff which is where the gravel ends. There is a scenic view of the Youghiogheny River from the top of the cliff. I drove to the power line ROW and Andrew waited at the bottom to make sure he didn’t get in my way if I got stuck and had to back down the hill. The ground was still frozen so I was able to get to the power line, with only one log in the way, and park. I just had new Bridgestone Dueler A/T REVO 2 tires installed with the expectation they would be better off-road than the stock Firestone Destination A/Ts and they seemed to work well! 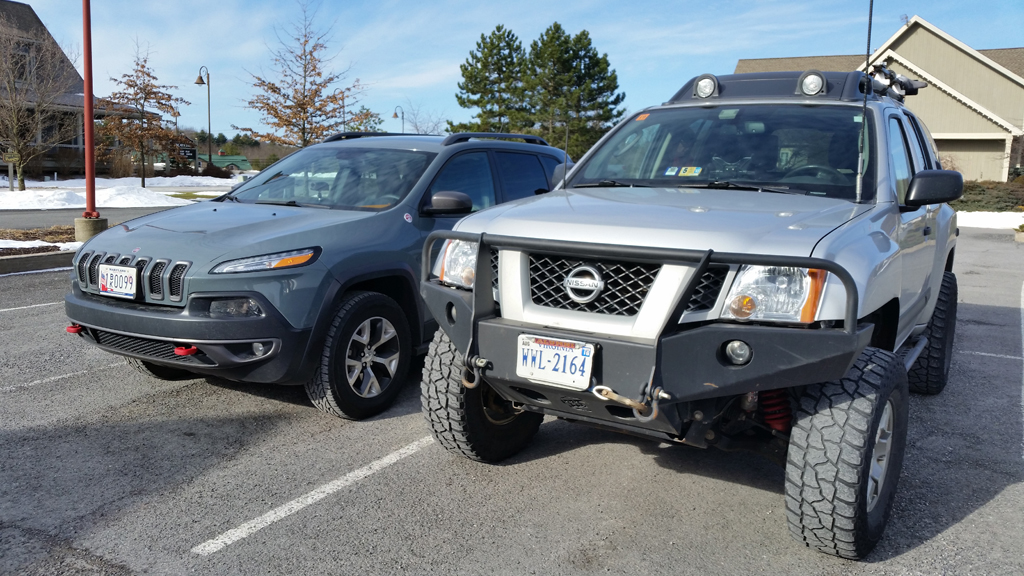 We used CB radios to coordinate our travels. Andrew drove up to the power line and parked behind me. I wanted to drive south in the power line to get to the top of the hill, which is my usual route. Just before the top there is a 30 degree grade. This time it was covered with snow. I drove part way up the hill on the snow and couldn’t go any further. So I locked up my brakes and slid down the hill backwards. That was the scary part. Finally stopped and backed down the rest of the hill until I got back to Andrew’s Xterra. Andrew tried to guide me but obviously I can not back up very well even with guidance and a reversing camera. Wisely Andrew did not attempt my route. So he checked out the short steep fire trail up the hill on foot, which did not have much snow, from the power line ROW towards the summit. He decided this was the way to go, so I got in his Xterra and off we went. 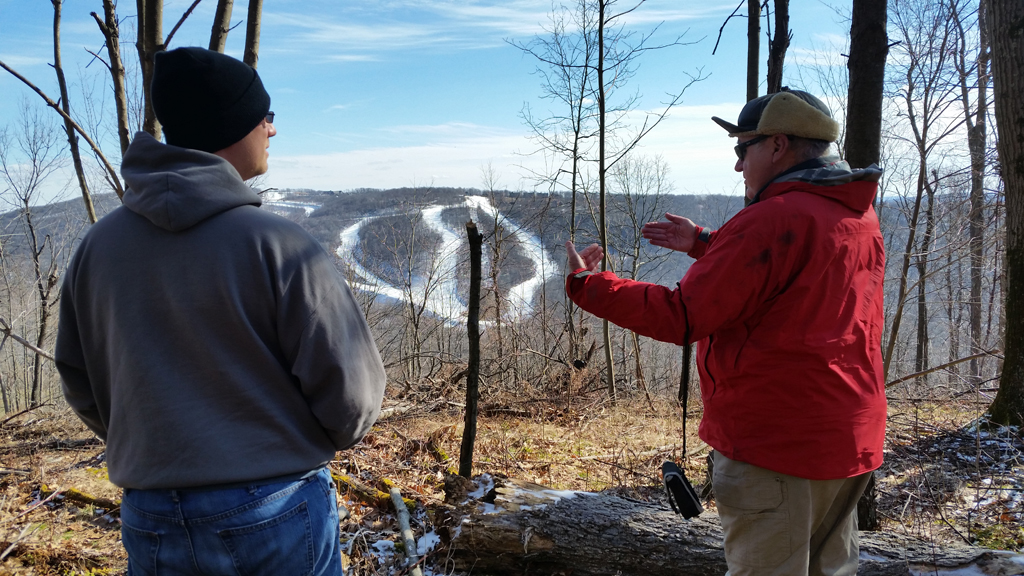 It had patchy ice under the dead leaves, it was muddy in spots and rutted in others. But with a little throttle and sawing the wheels back and forth we made it to the top which I thought was pretty amazing. I have not been on this part of the fire trail for decades. Went to the summit of Upper Ford Hill (elevation 2901 ft) and took pictures of the Wisp Resort ski trails which had snow on them. We drove towards the south end where we winched a tree limb out of the fire trail and then drove to the very south end where we ate lunch. Drove back north towards the summit and then down the short steep fire trail. I got in my Trailhawk and we drove back down to the County Road. The hill was much softer at the end of the day since the ground had thawed. We drove up Steep Run Rd to the cut-off to Wayne’s Spring, turned around and went back to the County Rd. I saw a flock of Ruffed Grouse ahead of me up Steep Run Rd! The tour was concluded at 2:15 PM without any mishaps, had lots of fun and took pictures and movies. Andrew recorded a GPX file of our travels which can be viewed below.

I stopped at the do-it-yourself car wash in Accident, MD and got the dirt and rocks washed out from the undercarriage. Also, checked for tree limbs and made sure I didn’t break anything. This is my standard ritual after wheel’n, except I usually go to the Jeep dealer in Accident, MD to do a safety check. Don’t really want to be cruising down Interstate 68 at 70 MPH and have a critical failure or rocks hitting people’s windshields.