As we’ve done the last few years (in 2016 and 2017) Cherie and I wanted to take Memorial Day to go camping and hit a trail, and as we did the last few years we decided to go to Crabtree Falls Campground for the weekend and hit the Big Levels trail in the George Washington National Forest. Cherie and I, my folks, her folks, her sister and husband, and Jesse, Wendy & Aiden all met Friday night at the campground. Saturday morning we headed to an Exxon in Stuarts Draft, VA and met up with the rest of the group which consisted of the following folks:

We left the Exxon, gassed up and ready for adventure, and took the 20 minute jaunt to the trailhead off of Coal Road. As we aired down 2 other groups of Off Roaders entered the trail, including a new member run for the Middle Peninsula Jeep Association. As we finished airing down and had our drivers meeting a newer 4Runner pulled in behind our group. Due to trail traffic they basically fell in with us and became our 7th vehicle.

Onto the trail we went, with Jesse taking the tailgunner position. The trail was clearly much wetter than it had been just a few weeks ago when Cherie and I drove the same trail during the Virginia Four Wheel Drive Association Earth Day Clean-Up! About 10 minutes into our ride we bumped into the back end of the Middle Peninsula group. Now worries, we were in no rush!

After a little while their leader reached out to me on the CB, his tailgunner had mentioned we were back there, and asked if we wanted to pass their group since he thought they were running slow. We took the opportunity to pass and thanked him for doing that. Their group was about twice as large as ours, and it took a few minutes for them to all park on the sides of the trail to let us pass!

A little while later we stopped for lunch at a spot not too far from the main overlook on the trail. As we pulled out our chairs to sit down the Middle Peninsula guys found us, and parked into the same spot and came to eat lunch with us! During lunch we realized they thought we were at the main overlook, and had accidentally stopped too early!

We had a good lunch chatting with them and our own group though. They eventually headed out, and we gave them a few minute head start. We bumped into them one or two more times, but it was no biggie. We stopped at the overlook ourselves, after tackling the most challenging terrain on this trail. Then chose to loop around on the bypass just to give those that wanted to a chance to hit the rocks again. We bumped into another group as we did that, that mostly consisted of Toyota 4Runners which was cool, and they said they were there because our website was so helpful in telling them, NC natives, about the trail and conditions to expect. Glad to help fellow off-roaders! 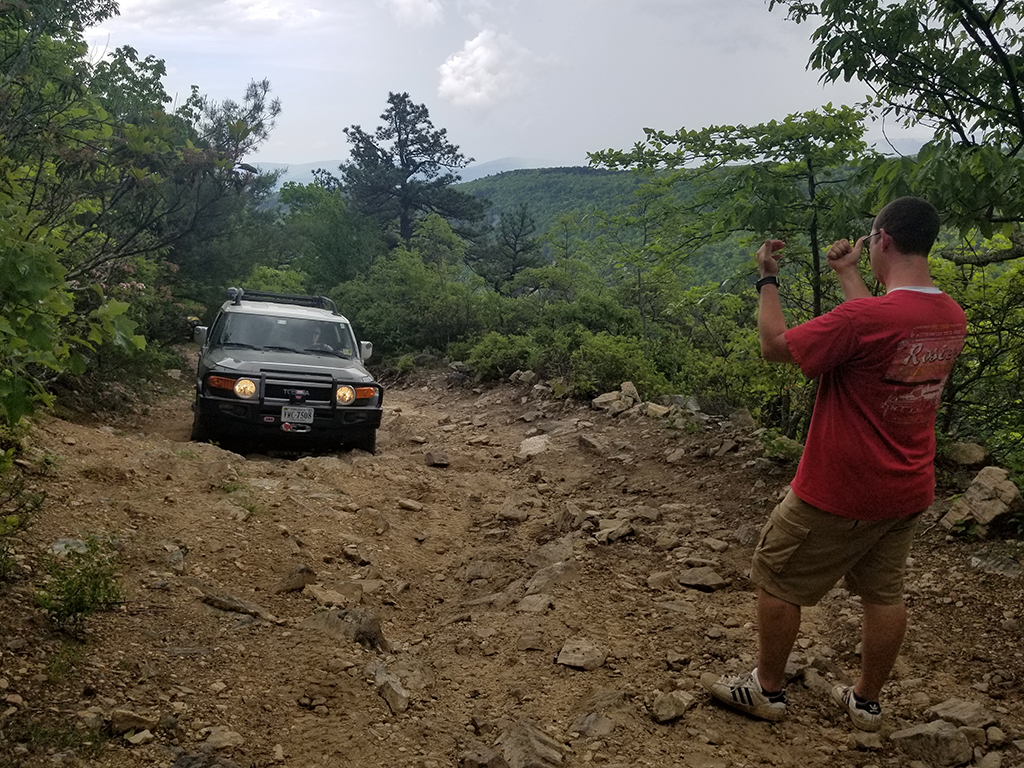 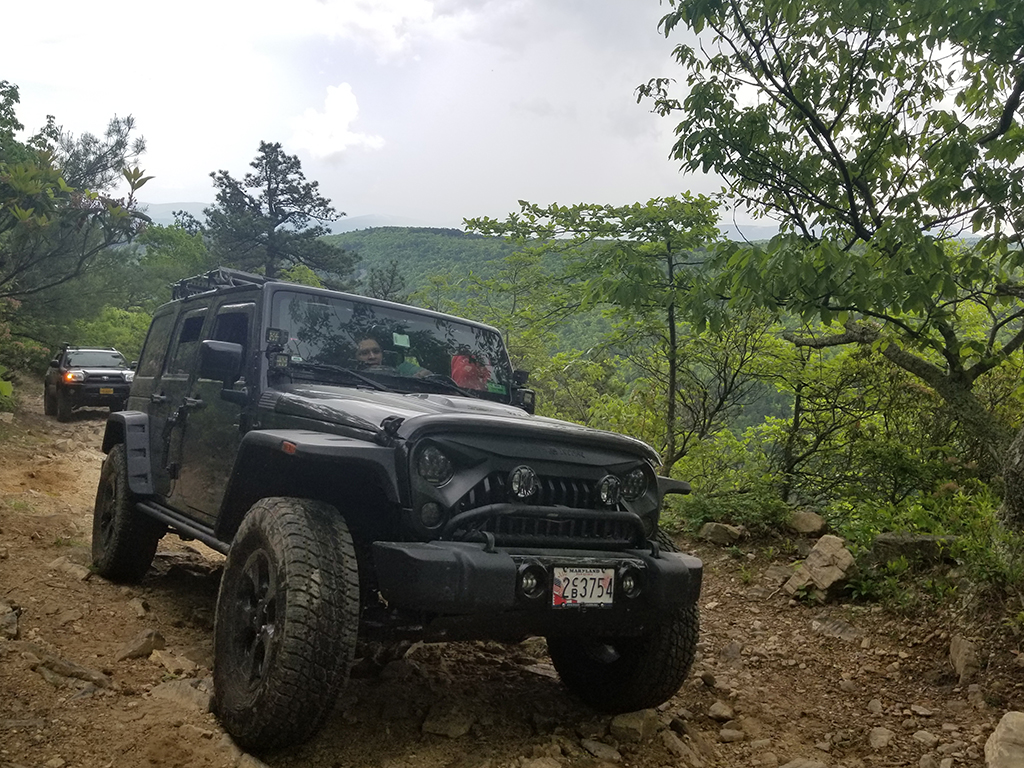 Shortly after the overlook we started getting into the wet part of the trail. This is where the big puddles can be, and as we found the first one we discovered a Discovery stuck in a puddle at least 30in deep! His buddy in a Tacoma was trying to pull him out with a 6ft chain! We stopped and offered them a snatch strap instead, which they used to get the Disco unstuck. After getting the strap back we let them get ahead of us and we waited for everyone in our group to make it through.

The biggest “puddle” on the mountain proved to be a bit too deep for Carrie and Anthony’s Xterra. They managed to get in and get stuck (thanks Anthony for egging her on!) and while they waited for 4Runner to pull them back out of the puddle the door seals failed letting water into the front of the vehicle. Carrie was understandably not thrilled. Once out they chose to take the bypass that many of us chose, while the 4Runner then went through the puddle almost making it look easy. It was deep though, and they admitted barely making it through! 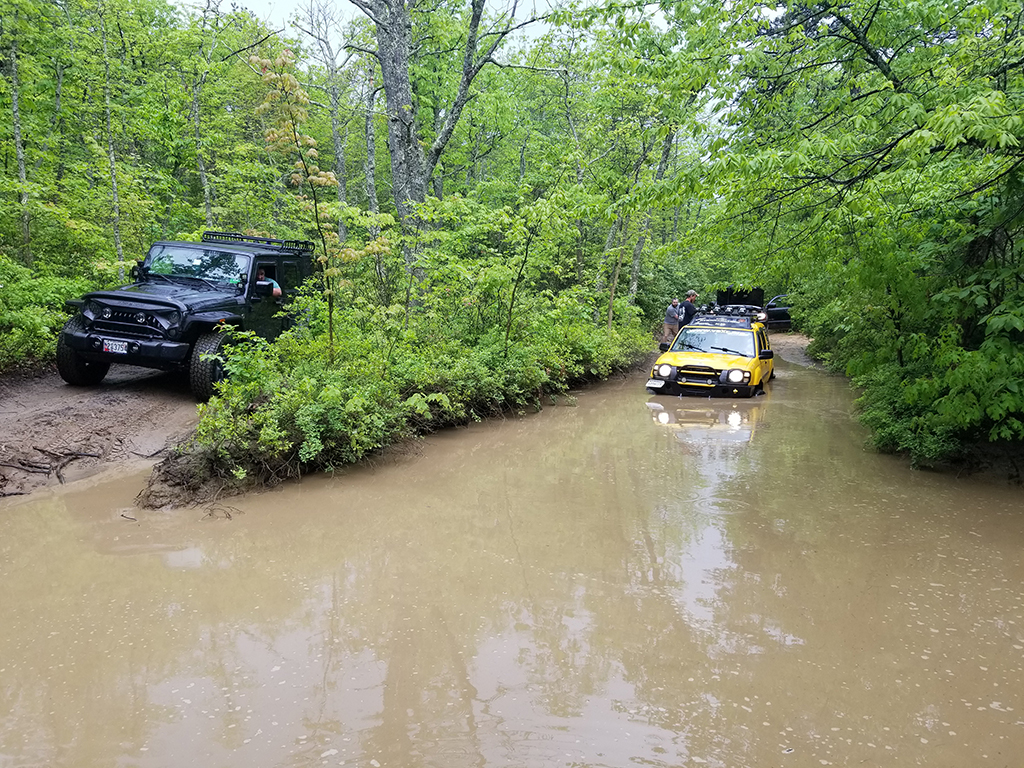 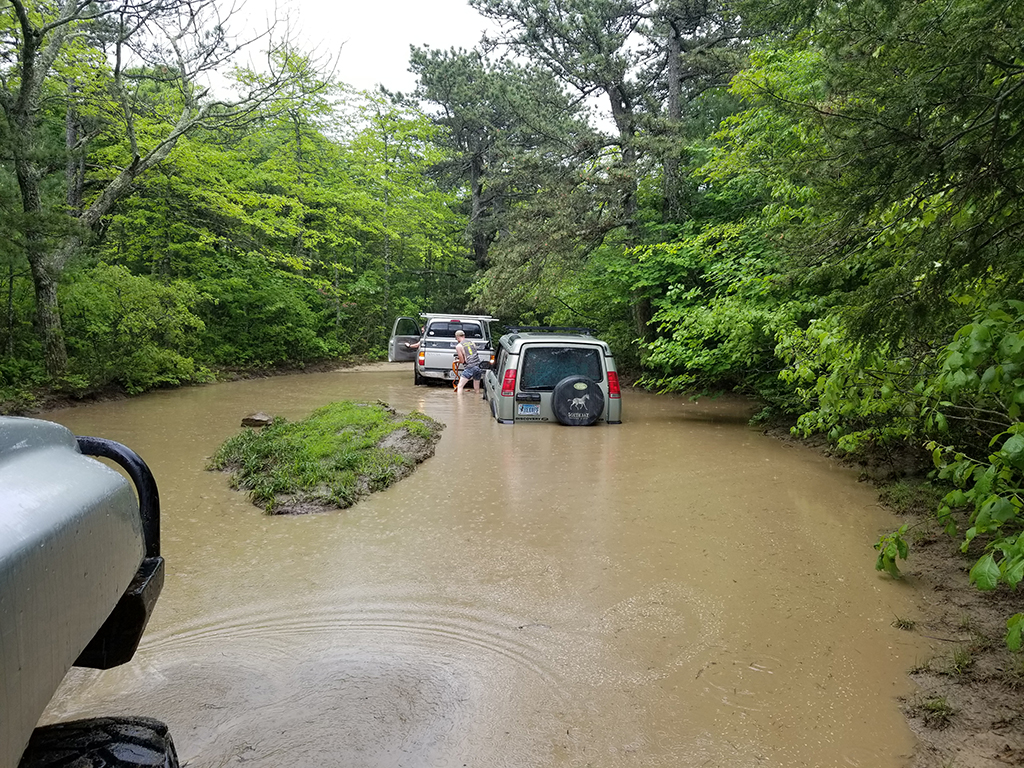 Toward the end of the trail we caught back up to our buddies in the Disco and Tacoma. The Disco was now limited to 1st gear and 2WD, with apparent damage in the transfer case and transmission due to it’s submerged state earlier in the day. They were in the process of abandoning the vehicle on the trail when we came up and offered some help. They wanted to know if we knew how to get a tow vehicle onto the trail to recover the Disco. Because we only had 2 more rougher switch backs before the trail got much easier I suggested that instead we move my vehicle and my parents driving the Tundra ahead on the trail, then they fall in behind the Tundra. They could borrow some of our recovery equipment and we’d give them advise on how to drive out, and if needed we could add the Tundra to the front of the Tacoma for more pulling power if needed.

All agreed and so we shuffled our line partially ahead of them, got them in place, hooked up, and they were off. The second switch back required shorter snatch strapping, but they got through with little drama. Cherie ended up driving the last few miles leading the group while I hopped into the Lexus with Shannon. Our group that had started with 6 vehicles had grown to 9, and much to my surprise, the 9 only contained 1 Jeep! Woah!

We eventually met up with the front of the group at the trail end at the Blue Ridge Parkway. We got everyone aired up and took a group picture moments after the Tacoma and Discovery had pulled away. They had at least made it back to pavement, so they figured they’d see how it drove from there, but worst case it was at least just a normal tow now if needed. They thanked us a ton for the help, it was their first time out, and after giving them a few more pointed we just asked that they pay in forward to other off-roaders in need in the future.

After the picture our group dispersed back to various places in Virginia and Maryland, with some of us heading back to camp for more camping (with a stop at the Montebello Country Store). The group that was camping did go out again Sunday, looking for views along the Blue Ridge Parkway, at Wintergreen Resort, and from Devil’s Backbone Brewery. We also braved VA814 and survived!

Thanks to all those that came out, it was great seeing all of you, and thanks for your patience as we helped our fellow off-roaders out of a rough spot. It was also great to meet and re-meet folks from the Middle Peninsula Jeep Association. They seemed like a great group of fun and responsible four wheelers too!