Earlier this year we decided to do something CORE hasn’t done in a while and that was to host an OBX trip in October. I started discussing with former members what those trips involved and ended up across the table from Keith Holman, former CORE member that hosted these trips, at the MAFWDA meeting in January. One thing led to another and the next thing I knew Cherie and I (along with anyone in CORE that was interested) were going with Keith and Betty on their spring OBX trip as a sort of recon for the trip to be hosted in the fall! We invited my folks to tag along since they live in Raleigh and Keith and Betty had a few friends that also made the journey this year.

he said “I’m full of many things, sometimes it’s information!”

We all took off on Friday so that we could head down and get in at a decent time. Cherie and I arrived to the Cape Pines Motel in Buxton around 3:30, about 2 hours after Kevin and Gigi’s family, and about 1 hour before my folks arrived. Keith, Betty, Paul, and Marylou had arrived Wednesday (they made it a 5 day trip) and Bruce had arrived Friday prior to our arrival. After briefly catching up with Keith and Betty who had just returned from a day out, and planning to meet them for dinner, my folks hopped into the Xterra. We met Kevin and family at their hotel (he wanted beachfront and accidentally got something that will likely be condemned due to erosion by October!) and they followed us out to our first beach driving of the trip. We went just north of Buxton, checked out the campground at Cape Hatteras, then on to ramp 38, and drove south along the beach. It was high tide and so we were limited to the soft sand nearest the dunes. 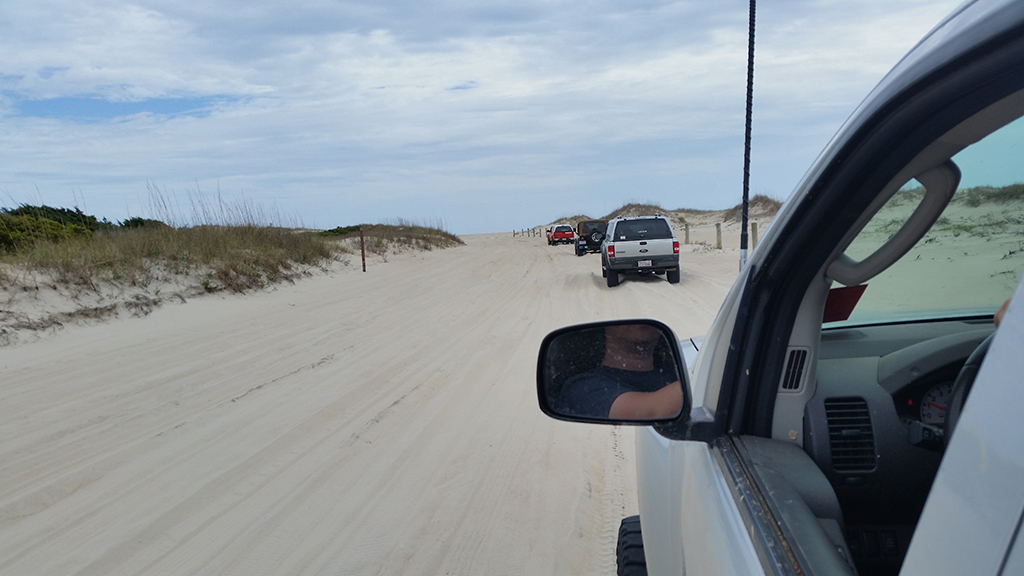 Everyone in my car noted how much it seemed like driving on snow which seemed like an odd parallel when enjoying a nice day at the beach!

After our brief beach outing we met Keith and Betty at The Captains Table for dinner, and that is where we met the rest of the gang! Paul and Marylou had rented a Wrangler from a local place to drive for the weekend and had fun with their first off roading experience. Bruce had done this all before and was ready for another relaxing weekend. The whole gang really did make the weekend and it wouldn’t have been the same without everyone there.

Following dinner Keith and Betty led Cherie and I, my folks and Kevin’s family back out to the beach at ramp 49 where we then drove north to get away from all the lights. We turned off all the vehicular lights and just enjoyed the darkness, the stars, the sounds of the ocean at night and the kids and the dog finding crabs on the beach with their flashlights. Eventually we headed back, passing the ramp so we could drive to the southern limit of ORV access, then back to the ramp, and got back to the hotel at 11. A fun first day.

The plan for Saturday was simple. Get up and ready, eat at Diamond Shoals restaurant, leave at 9:30 and get to the ferry to Ocracoke at 9:45 to catch the 10am boat. We ended up taking a few minutes longer to get out of breakfast and missed the ferry, so we got to enjoy the shops at the ferry port and get shirts and hats and such until the 11am ferry! The ferry ride was fun and everyone enjoyed the ride over.

On Ocracoke Island we made our way to ramp 72 then headed to the southern limit of ORV access and setup on the beach. We had 5 vehicles and 13 people out just enjoying ourselves. Gigi setup for fishing, the kids and dog splashed in the water, and my dad and I tried out my new X-Zylo which seemed to entertain everyone that was just sitting, talking and relaxing. Paul did have some issues with the 4WD popping out and sometimes struggling to get it to engage, which would turn out to happen frequently over the trip. It was an old Jeep probably on it’s last legs, it happens.

We ate lunch at Howard’s Pub and enjoyed the 360 degree view from their skydeck after the meal. Then headed to ramp 67, drove around on the beach, then on to the pony pens. While checking out the ponies we were informed there was a baby seal on the beach across the street. We checked it out, and thought it looked sad and sickly. But eventually a wave came in, and woke it up enough, it got right back into the water and went on it’s way. In hindsight, a sleepy seal trying to take a nap probably looks similar to a sickly seal about to kick the bucket.

As we returned to the vehicles the Keith, Betty, Paul, Bruce and Marylou decided they’d make a run for the 5:30 ferry (it was 5:18) while the rest of us decided to head to ramp 67 and set up on the beach some more. We enjoyed the beach until 7 when the tide was basically chasing us away, Gigi did catch a puffer fish though which delighted her! Once back on Hatteras Island we realized our dinner options were limited since it was the off season and so we headed to the Inn at Pamlico Sound which was one of the few places open. The food was great, but not cheap, and also may have lost some of the glamour with people literally falling asleep at the table! They were both kids, it’s ok.

Sunday morning I called Keith to discuss the plan for the day. He mentioned a recently re-exposed beached shipwreck that we could check out. I said he was full of information at which point he said “I’m full of many things, sometimes it’s information!” After breakfast again at Diamond Shoals we all headed to ramp 27 and discovered the ship right off the ramp! It was on the beach, a wooden sailing ship built in the 1860’s and wrecked in 1933. Keith and Betty had looked for this ship for years and it had been just under the sand all this time!

We drove north on the beach over a drop off of sand and then across an off camber stretch which seemed to cause everyone to crab walk a little. When we hit the closed area for the birds we stopped and set up on the beach one last time. Out came the camping chairs, fishing poles and a few kites! The kids enjoyed the water some more, found some large and small jellyfish, and Cherie even got Zeus the dog less afraid of the water. Eventually we decided it was time for those of us that were leaving to start getting on the road. We said our goodbyes on the beach and thanked Keith again for the invite.

As we passed a local off-road club lined up for a picture on the beach we heard one person exclaim “Is that a f***ing Rav4?”

Kevins family as well as mine had decided to hit Carova beach on our way north. We went back and got my folks Rav4 and then took our 3 vehicles north. You see, State Highway 12 which is the main road going north and south along the outer banks eventually goes right onto the beach just north of Carova! There are several miles of homes just south of the VA/NC line that are only accessible by driving on SH12 on the beach. This area is also home to wild horses that live in this area.

My dad decided to try his hand at beach driving in his Rav4 and so off all 3 vehicles went, onto the beach in search of the horses on our way to the state line. The tide was halfway between high and low tide so the beaches were wide but long stretches were very soft. As we passed a local off-road club lined up for a picture on the beach we heard one person exclaim “Is that a f***ing Rav4?” which pretty much made my dad’s day! We eventually made the decision to head up into the sand “streets” between the houses in search of the horses and eventually did find them, next to the highly modified Hummer H1 tour groups that also patrol for the horses. Kelsey was thrilled getting to see the horses.

By the time we made it to the VA line it was getting late, and the tide was coming in. We headed back more purposeful now. With the tide nearly at it’s peak the beach was narrow and soft and it had started to rain. The Rav4 got stuck once but it gave Kevin an opportunity to try out his new Maxtrax which worked great and got us moving again very quickly. The off-road club drove by offering to help which was nice but happened just as he got unstuck.

We left the beach and made our way to a gas station. It had started to rain. We assessed the pulled down airdam on the Rav4 (he had scooped sand in reverse but it was fine to be repaired at home), said our goodbyes, and parted ways. Cherie and I got home around 2am, and the Barnes’ did as well. But it was worth it, we had had a spectacular weekend!

Trail report written by Andrew Taylor. Pictures courtesy of The Taylors, the Holmans, the Joneses, and the Barneses.