Wheelin’ for Hope has become an event that CORE members look forward to all year. It is a two day guided off-road experience held annually at the Oak Ridge Estate. Rigs from hardcore trailer queens to bone stock 4×4’s all tackle the same trails with optional side obstacles for those looking for a challenge. It’s a neat way to enjoy the trails with a variety of vehicles and people of all backgrounds and skill levels! Proceeds from the event, hosted by the Relay for Life of Nelson, Virginia, go to the American Cancer Society. Of the 200 vehicles on the trail this year here is who attended from CORE.

This years adventure started long before we got there. Kevin’s axle had broken a few weeks prior to the event and was in Utah being repaired under warranty just days before the event! Meanwhile I was spending 2 weeks trying to get new Uniballs for my UCA’s (the liners had come out) which came in Thursday morning. Both of our vehicles were in the shop til noon on Friday! Kevin had also just finished getting new shocks and new 35” tires (from 33’s) which he was eager to try out. With parts installed we all descended on Oak Ridge from our own directions (WV, VA and MD) and met up at the field for camping and got a nice little spot at the far end. Friday night was spent checking in, catching up, setting up, and just hanging out into the evening.

Saturday morning Fred hopped in with Robert and Shelley in with Kevin, the trails were going to be a little intense for the Tahoe. 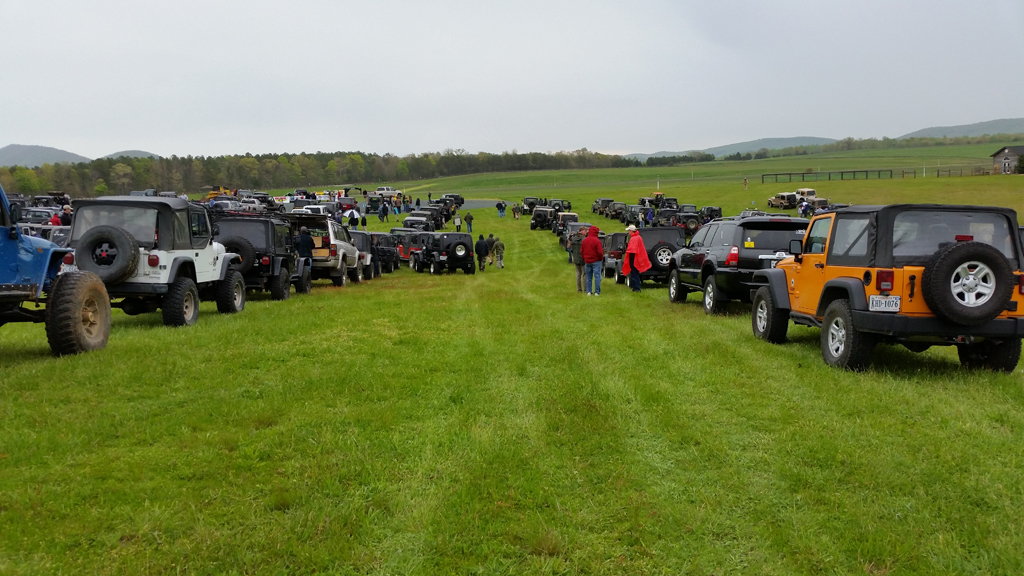 Lining up in the morning!

As we pulled into the field where we all line up in groups the precipitation started. Not only a light sprinkling of rain, but also sleet. After the drivers meeting we all hopped back in our vehicles and away we went into the drizzle and sleet. Our first major obstacle of the day would be going down CJ5 hill into the stream at the bottom. Our group handled this without any issues and we continued on. We looped around for a bit on various trails, eventually making it back to CJ5, this time to go up it. Again no one in our group seemed to have any issues which was surprising considering this obstacle is a big knobby and wet rock face! 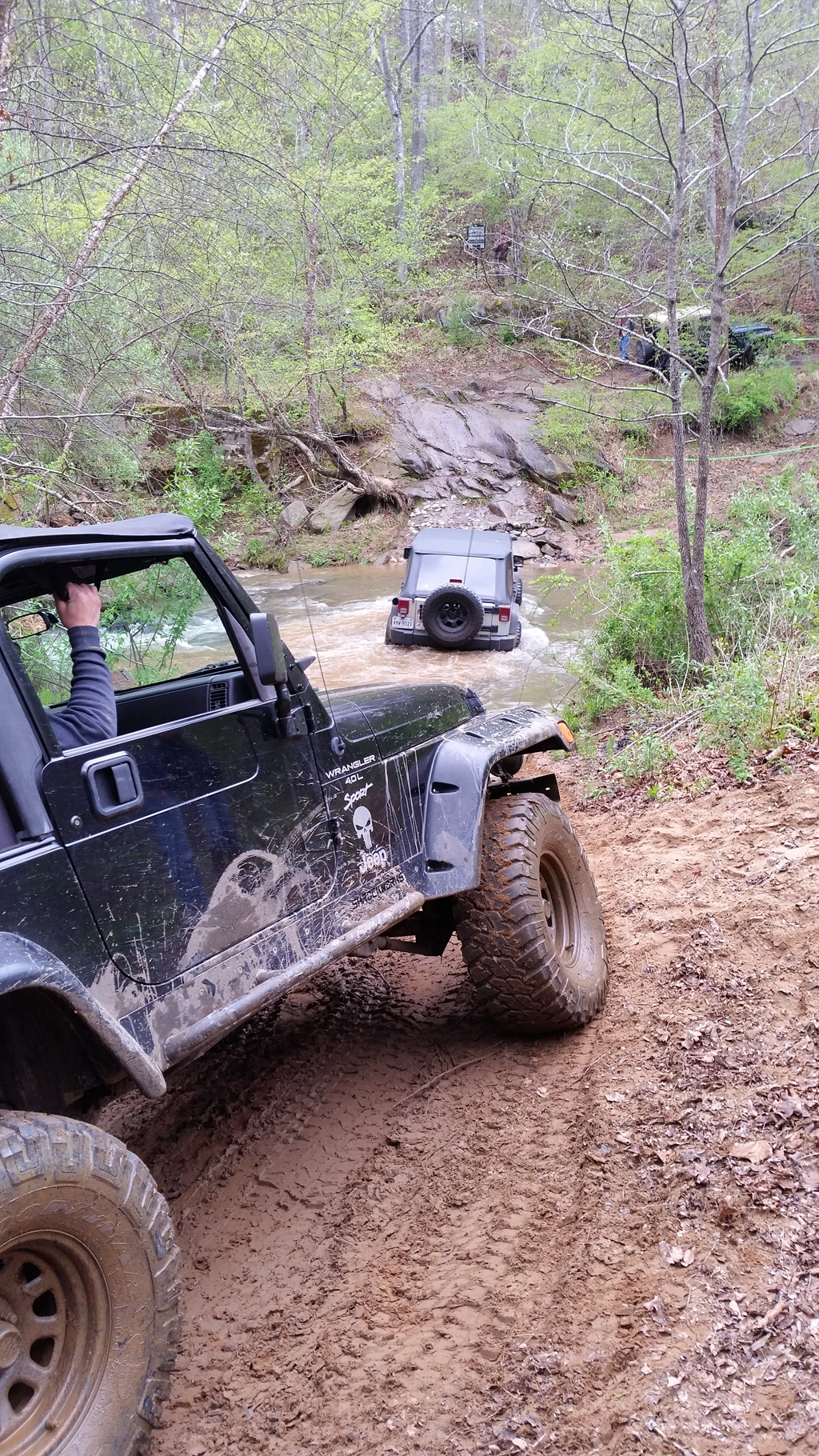 Just before lunch we came to another stream crossing. This one required a steep downhill descent on a muddy hill, cross a stream 2 feet deep, and then on the other side try to climb out on a rutted out muddy hill! We quickly figured out the way to do it was give it some gas coming into the hill as you cross the stream and stay on the gas until you were up onto the bank. While this worked, each vehicle was shooting muddy rooster tails up and out across the stream, slowly making the ruts deeper for those of us at the back of the group! Kevin and Shelley were the first from CORE to attempt it. With a little bit of speed he hit a dip in one of the ruts and both front wheels bounced skyward! Luckily he did not roll backwards into the water. With a little less speed going in and more gas once he was on the hill he climbed up with less excitement. Cherie and I seemed to have little issue on the banks which was nice. Next a non-CORE Jeep and then Robert and Fred in the 4Runner. By this point it was pretty rutted out and Robert pretty effectively buried the front end into the hill.

Robert attempting to make it up the bank.

After our late lunch we looped around some more on the trails. Eventually we made our way to an area with a rutted out muddy hill directly ahead. We quickly figured out that only those with lockers seemed to have a chance. Those without were going to pull over on a side trail until the guide to get them out another way. Well one more guy without lockers wanted to give it a try, and try he did with speed and gusto, until he popped out of the rut and right into a tree halfway up. Most people seemed sad he had hit his fender on his Wrangler, but more importantly he had broken the end off his tie-rod, so his wheels were pointed in opposite directions! Around this time someone else who had managed to get to the top of the hill had then slid precariously close to the edge of another section of the trail that looped back down the hill. We had 2 stuck vehicles, it was starting to rain harder, and it was a little after 3:30pm and we were supposed to be off the trails by 4!

Kevin drove as far as he could up the untouched portion of hill to get to the stranded Jeep on the ledge, eventually losing traction and winching the rest of the way up. Once up there we winched the Jeep back toward Kevin, in the process getting Kevin stuck in the mud. Eventually I would setup the Xterra at the bottom of the hill to winch both of them back and then down the hill using a snatch block on a tree. We were all out of there by 4:30 somehow!

Mud would be the word of the evening. By the time we got back to camp people were getting stuck in their trail vehicles in the camping field! One particularly slick spot was right in front of our tents. Kevin started towing people back up the hill (he really likes his new tires btw) and apparently got noticed doing it. During the raffle the announcer said that the catering trucks were now also helplessly struck in the field and would also need towed out. The crowd assembled for the raffle started chanting “Land Rover! Land Rover! Land Rover!” I went with Kevin and we got his vehicle, and an extra strap and gloves. I’d hook up the vehicles and he’d tow them out, then come down for another one! In the end Kevin and I hooked up and towed out their refrigerated box truck, 1 small trailer, a Chevy 2500 with 4000lb trailer, and a Ford F-350 with an 8000lb trailer (that one we hooked up a 2nd tow vehicle for) and a small truck that was in the way but stuck. By the end of the night Kevin had towed about 15 vehicles including the caterers, and we were all covered in mud! 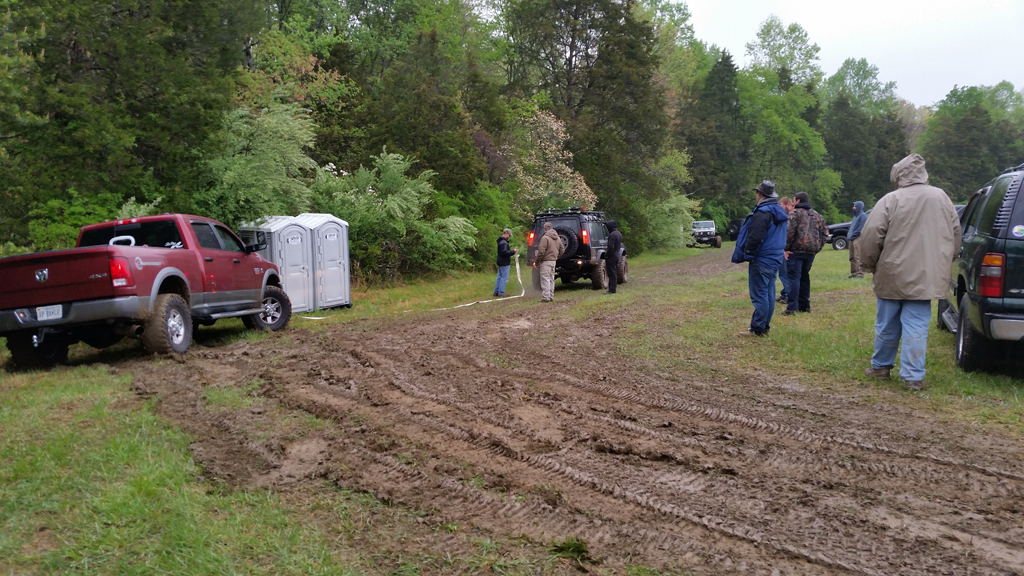 Kevin towing everyone out of the mud.

When we returned back to camp we found out I had ironically won a recovery kit in the raffle and Shelley was the proud new owner of a Hi-Lift! We discussed our plans for the next day, but between the exhaustion from basically constantly recovering people since 3:30pm and the fact that the trails were going to be covered in slick mud again tomorrow (it was raining harder and harder as the evening progressed) we all decided to not hit the trails on Sunday.

Sunday morning we found that many had come to the same conclusions. As if to reiterate the wetness we had one more good strong shower for an hour or so just before we all got up. We all packed up during a lull in the rain. The packing took closer to 2 hours instead of the 1 it would normally take. The mud just made every movement slower. The Tahoe got stuck on the way out so Kevin got one more tow in as we headed to a gas station nearby to air up and gas up. Kevin discovered his tires valve cores were not sealing and all weekend his valve caps were what had been holding the air in his tires! After a quick McDonald’s breakfast we all said our goodbyes. Once again our trip to Oak Ridge Estates was nothing but adventure!