I decided to host another double weekend at Rausch Creek and Anthracite Outdoor Adventure Area because we had so much fun when we did it last fall. Going on Memorial Day weekend gave us several days to just relax, camp for those that were interested, and get in some good wheeling time! This time we had even more people which meant more excitement, more trail repairs and more fun! We even got some non-CORE friends and new to CORE guests out and everyone had a great time. In for the adventure this time around was:

The ground gave way and pitched the back of the vehicle up in the air. It required a winching job and some careful rigging and resetting and winching some more to get them out of that situation!

Many of us went up Thursday night and stayed at Twin Grove Campground in Pine Grove, PA. Kevin and family were trying out his newly upgraded expedition trailer for the weekend and seemed to enjoy the new setup. Additionally a few friends of mine, Keith and his family as well as Tom, were camping nearby which gave us a nice little gathering at the campground when we were all hanging out and relaxing. By the way the whole region was experiencing a major caterpillar boom and all weekend despite the clear skies it sounded like it was raining in the forests from all the caterpillar drippings raining from the trees!

We met at Rausch Creek Saturday morning at 9am, 30 minutes after opening, to discover the parking lot packed and a long line out the door. In addition to it being beautiful out, and Memorial Day, the park was hosting the RCRocs Crawl rock crawling competition. It took us about an hour to get everyone signed in and back out to the parking lot. With the crowd, and a large portion of the main park closed due to logging, we decided to checkout the Northeast property, a first for many of us. 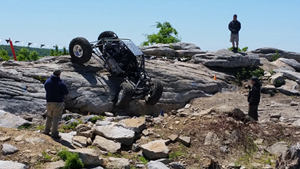 Rock crawlers out on the course.

We had agreed on mostly greens and blues for the day and so enjoyed several trails on the north half of the Northeast property before lunch. Just flexing stuff out and enjoying ourselves in the beautiful weather. It was a perfect day for wheeling. We decided to go back and enjoy lunch in the main parking lot and watch the rock crawlers on the comp course. If you’ve never seen these machines in action before make sure to take some time do that sometime. They can do the seemingly impossible!

After lunch we headed back to the Northeast property, this time heading to the far south end. We picked up another guest, Jeremy and his wife, who thought we looked like we knew what we were doing! Along the way we got to a very steep red clay hill. One by one we tackled it, until Jeremy got stuck near the top. This was an opportunity to try out a sample kinetic recovery rope Mike C. had been asked to try out. It worked, but we’ll need to test it more before he gives it back, just to be thorough of course!

One especially noteworthy trail, 38A which we nicknamed “Brake Check” due to the warning sign had those that were interested dropping down two seemingly near vertical hills of loose dirt. Along the muddy rocks in the middle of the loop Mike C. slid sideways and got a good sized dent (to match mine?) in his rear quarter panel. Eventually Tom, Kevin and Mike made their way back out of the trail over a pretty decent rock obstacle that they all masterfully overcame.

We continued enjoying various other trails in the Roswell, R and N area. At one point Tom realized he had a sound coming from the front of his rig, and upon further inspection found he had a busted CV. 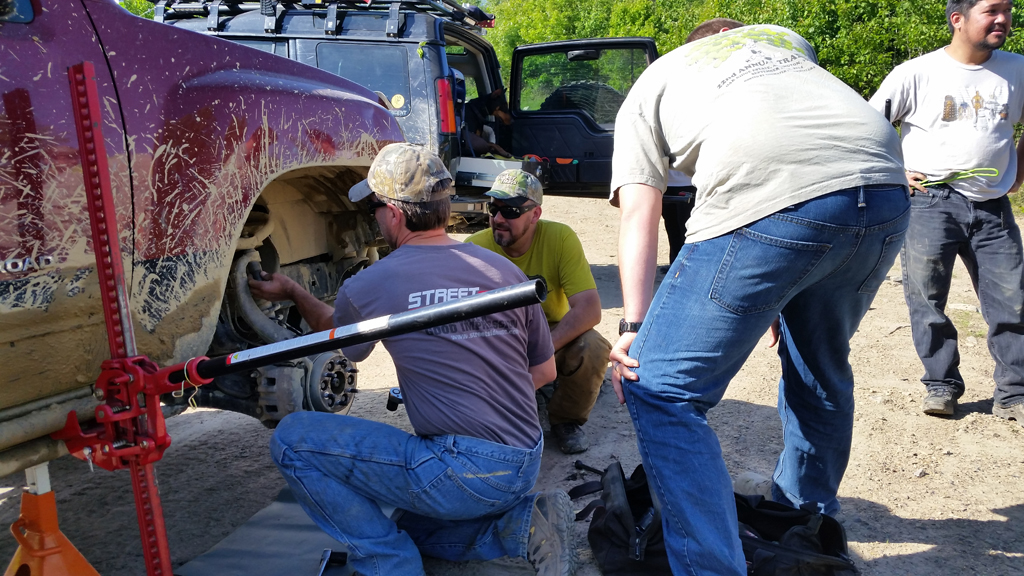 Swapping out Tom’s half axle.

Lucky for him he had a spare half axle and this was his 4th that had needed replaced, so he managed to swap it out on the trail in a little over 30 minutes!

By that time the day was getting late and we decided to head scenically back to the parking lot. I think everyone had had a pretty good day, no major breaks, and the one we had was easily repaired since we had the right tools, parts, and attitude!

Sunday we awoke to a cool morning. After breakfast we headed north to Anthracite which was about 45 minutes from the campground. I was informed of our first vehicle breakage as we pulled into the parking lot. Apparently Y’shua’s driveshaft snapped on the way north that morning. Glad to hear he made it back home alright! Once we arrived and registered I quickly realized this day I was hosting an Xterra event, by accident! After we all aired down we headed for the trails. Again looking for green and blue trails we headed to the far end of the park. After a few of us had tackled the first hill Mike C. realized he was having a mechanical problem which we quickly diagnosed as a bad CV. Since Tom had used his spare we had no more, and so Mike C. was forced to leave before even hitting 1 good obstacle! He made it home though on the bad CV!

We poked around for a few more hours enjoying various trails, and more caterpillars hanging from every tree! Tom left as we stopped for lunch, he had a lead on another used half axle and so he left to meet the seller. Immediately after lunch it was my turn to have an issue. After crawling up over a large stairstep of a boulder (at the same place we discovered Mike’s issue that morning) we started to have some odd rubbing noises in our vehicle. We determined that my rear axle had slid off the center pin on my leafpack, and that my axle was now rotated back on the drivers side so that the tire was rubbing the wheel well. As we diagnosed the problem Keith found out his wife was sick and he needed to head out soon to get the family back home.

Lucky for me, Keith was an expert on this kind of trail repair because about a year ago he had a similar problem when we were at Rausch and we got it repaired in about an hour in the middle of a rock garden! Thanks to that experience I had purchased the correct spare parts, but I was happy to have Keith’s expertise as we actually conducted the repair now on my vehicle. Thanks again Keith for staying long enough to get me back in driving condition!

He headed out and I was repaired enough to continue on for the day. After knocking off some of the pounds of coal dust the kids had absorbed (they literally were covered head to toe while we worked) we continued exploring, coming to one fun playground from a few different directions throughout the day. 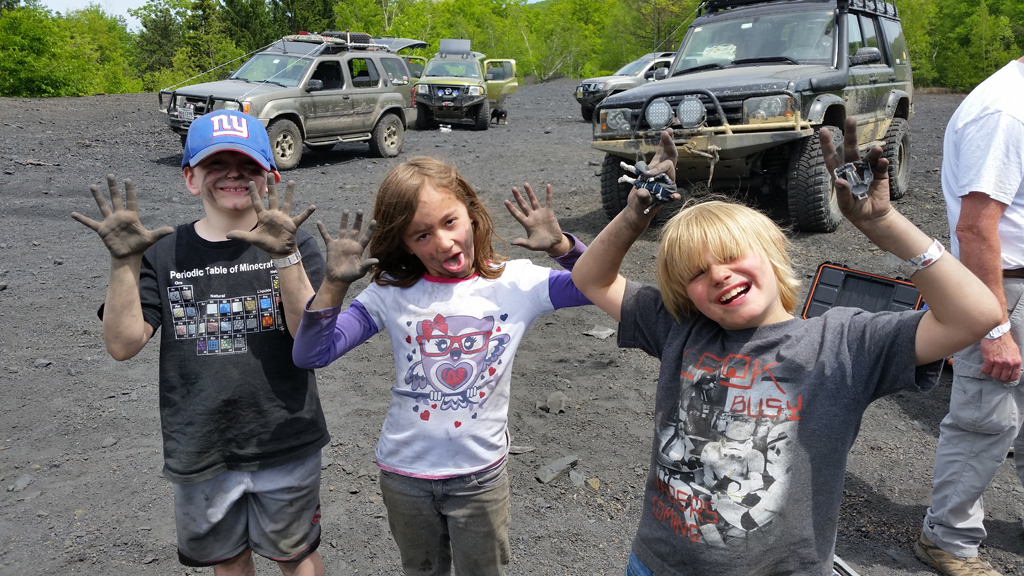 Playing in the coal dust!

One bit of excitement happened as Mike and Jake approached a long descent into that playground. As they approached the top of the hill they were squeezing between a hole in the ground and a stump, and apparently got just a little too close to the hole. The ground gave way and pitched the back of the vehicle up in the air. It required a winching job and some careful rigging and resetting and winching some more to get them out of that situation! No one was hurt though and the vehicle was fine, so we moved on.

As we headed out we all enjoyed one more series of obstacles in the form of some washouts that allowed people to take various lines based on their interest. I think I got a dent in my plastic bumper that I still need to knock out. All in all it was a good day, and we even took time to pose in the big coal bucket near the parking lot.

I’ll add that Anthracite has been spending some time and money putting new signs out throughout the park to show the difficulty of trails for the different types of vehicles that use the area. We noticed several new signs with a Jeep-like silhouette designating trails as black or red, with diamonds below to further the description.

That night at camp we relaxed again and enjoyed the extra night this weekend allowed us to stay. Doing a dual Rausch/Anthracite weekend was a great time again and I was thrilled so many were able to participate. Even the trail breaks happened with smiles on faces and it seemed to be a pretty good outing and a great weekend for wheeling with new and old friends!