Preston Stevens, member of many off roading associations and clubs, has a relationship with John Denning, the Forest Manager formerly in charge of Potomac State Forest. Because of that relationship John has allowed us to come up one weekend a year and gain access to trails normally off-limits to full-sized SUVs, and in exchange we clear them of downed trees and other obstructions to reduce the work his staff must handle. Sadly John Denning retired just before this years trip and we hope this mutually beneficial arrangement can continue moving forward under new leadership.

Cherie and I took Friday off so we could get on the road early. Unfortunately early was a little later than planned. We met up with Wook at Arby’s, had lunch, then hit the road together. The drive to Potomac was about three and a half hours from our homes in Northern Virginia. Overall the drive was beautiful. Unfortunately our Xterra continued to exhibit signs of overheating anytime we were on a long uphill, something that had started during our Memorial Day trip, but I hoped was resolved with some added water. Also the front end wobbled somewhat violently anytime we were going about 62mph. So while we made it home without any additional issues, on the way there it was decided it would be going to the shop!

Friday night we had eight trail vehicles represented in camp. Three more trail vehicles would join us Saturday morning. But that was a huge turn out! It was great to see so many familiar faces, and to meet new ones. A highlight was meeting Mike and Katie who own a homemade schoolbus RV and a stretched Jeep YJ that can seat 2 adults and 6 kids in it’s three rows! It was also great to see Kevin and Sarah, up from Florida, in their new JLU. The grew this year for the trail ride included:

Saturday’s volunteer project was painting the yellow gates which limit access to various parts of the forest. We broke into two teams with each going a different direction from camp. Our team broke down into two smaller groups, a sanding group and a painting group. We sanded and painted gates for a few hours until we ran out of gates on our end of the road! We returned to camp around lunchtime to relax for a bit, eat, and get ready to head back out.

We sanded and painted gates for a few hours until we ran out of gates on our end of the road!

After lunch we headed out to try our hand at Rattlesnake Ridge. A crowd pleaser each year, the entrance to the trail is on the far side of a stream crossing. I took the tail gunner spot and followed the group led by Preston. The trail was damp and slick and people had some hangups at a few spots. Additionally the front of the group cleared a few trees along the way, although us in the back could never get up there in time to help.

We came upon a tipped tree whose root ball had created a large hole partially going across the trail. Because the trail was so slick most found it difficult to not slide into it. The group had mixed success at driving around, or through it, unaided. Unfortunately the excitement around this obstacle caused us to miss our intended turn. We would end up passing our normal route and heading straight ahead onto a part of the mountain that is more overgrown and has some issues with hill slides. 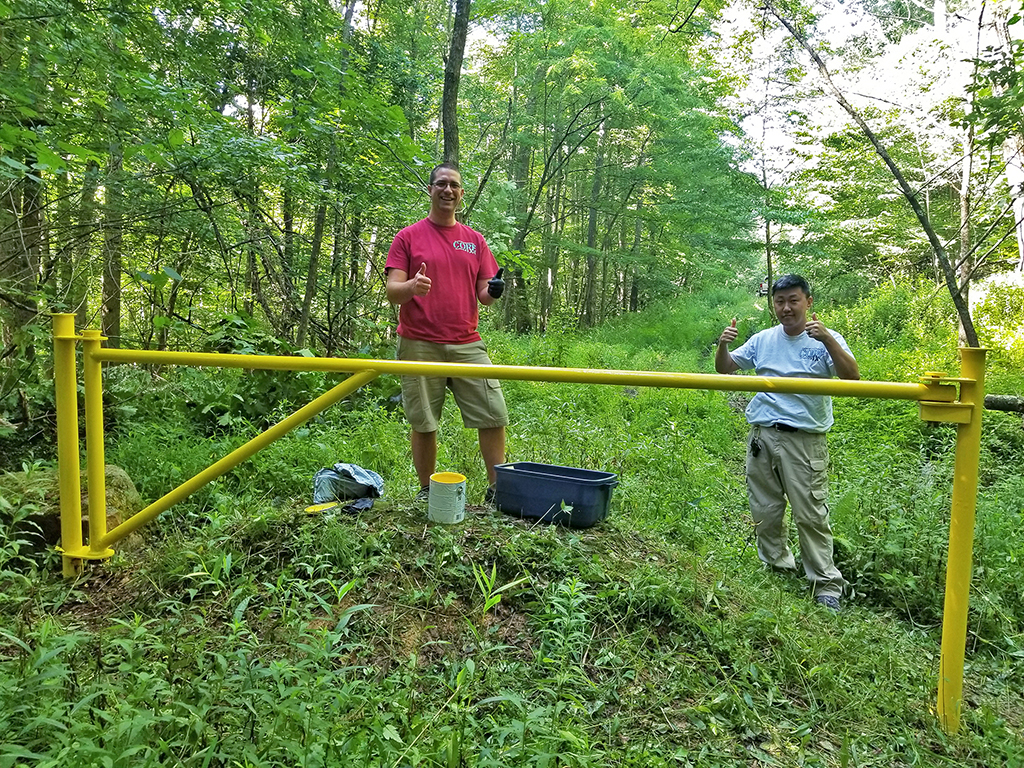 Much to his surprise, Preston found his vehicle suddenly turn toward the edge of the shelf road on slick dirt and vegetation. Thanks to quick thinking he was able to turn away from the edge, but it was not enough to keep from going over. He ended up with the whole vehicle on the side of the hill, but pointed straight up toward the road. He stopped without even hitting a tree! Gary pulled forward to lend his winch and Mike led the recovery effort. In just a few minutes Preston was back on the trail, but had decided it was probably too slick to keep going on in that direction.

What should have been a quick return from where we came resulted in 2 popped tires among the group, about 50 feet apart. Eventually though we all made it back off the trail.

Most of the group decided to go out for one more late afternoon run. We headed over to Loop Road, a seasonally opened snowmobile route, and found more of the same. While most of the trail was passable there were definitely areas that were very slippery! One hill in particular resulted in the group taking over an hour to overcome. Cherie and I happened to be parked in a large mud puddle, and with no way forward and no way to easily cross the mud on foot if we backed up, we just patiently waited in our vehicle while listening to engines redlining while attempting the obstacle ahead. Eventually we would find out it was the same hill that was always a challenge, but this year it was just a little more slippery than normally. I’m proud to report our Mickey Thompson MTZP3’s hooked right up and got us to the top of the hill in one fairly unexciting attempt.

We just patiently waited in our vehicle while listening to engines redlining while attempting the obstacle ahead.

Our return to camp was later than expected and so those that planned to stay the night started dinner prep immediately. Mike and Katie’s family got a fire going for us. Saturday night around the campfire is always the best. A combination of re-telling what happened on the trail that maybe others didn’t get to see, and reliving past events. A handful of us stayed up past 1 AM chatting around the fire. 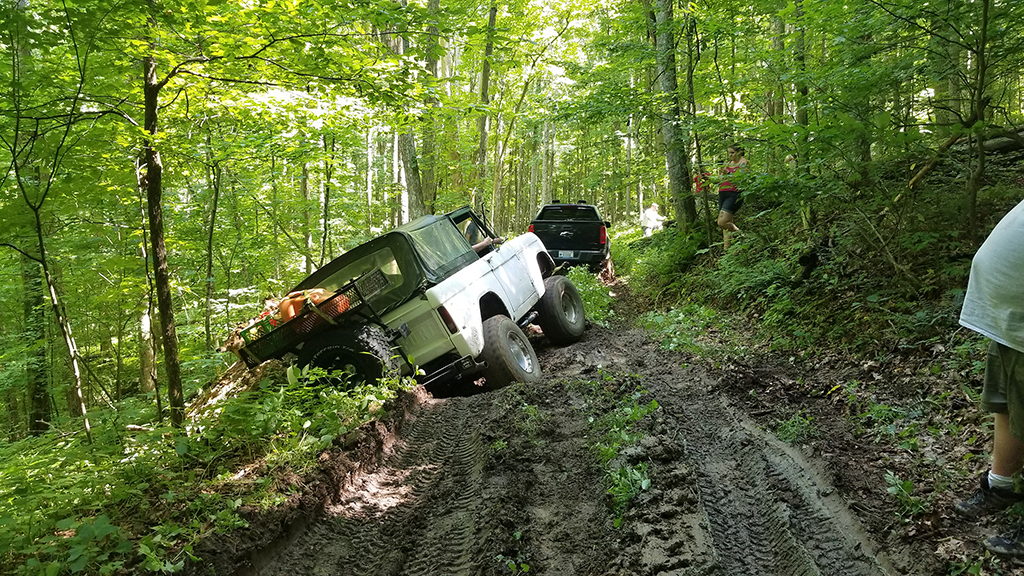 Sunday morning we went out for one last short trip. Not too far from camp is a trail that leads down from Wallman Road down to a train bridge over the North Branch Potomac River. Four vehicles made the trip, then headed to the end of Wallman Road to check out the trout fishing area. Our last stop on the way back to camp was to walk up a stream to a small cascading waterfall not too far off the road that Preston knew about.

Eventually we had to head back to camp to pack up. Cherie and I headed out about the same time as Kirk. Preston would lead a group over to Wolf Den Run State Park on Monday, on their opening day, to check out the new nearby off road centric state park! A great end to a great weekend.