I had been talking to Kevin and Shawn on the side and we hatched the idea to do a Rausch trip while Kevin was up visiting from Florida and Shawn’s girlfriend Christina was visiting from Canada. It doesn’t take much to convince me a trip to Rausch would be fun, so I agreed to lead since I knew the park the best out of the 3 of us. Just before I got to send out the invite Sam sent one out for Saturday of the same weekend, so we ended up just hosting 2 single day events at the same location back to back.

Apparently that was exciting enough Patty’s son put his tablet down for a little bit and caused him to ask Patty for the rest of the day to “Drive like Ed.”

Along for the run on Sunday were the following:

After a drivers meeting in the parking lot and airing everyone’s vehicles down we hopped in and off we went. We had a mixed group of folks and vehicles. Patty had never been off road before in her Jeep, Joseph had never done very intense off roading, the rest of us had varying levels of experience and built up vehicles. In a group like this it’s always a challenge to find trails/obstacles that entertain everyone while not being too much for anyone!

From the parking lot we headed east and tackled 3B which I thought would be a good taste for everyone for what the day had in store for them. It was on 3B that I realized Joseph still had his hard plastic mud flaps on, a part considered by Nissan to be an upgrade, but universally known to Xterra offroaders to only cause damage on the trail. After our first few obstacles on 3B we got to 3A and then the area of A at the top of the 3 black trails. Joseph and I decided to take a few minutes to remove his mudflaps to reduce the chance of damage throughout the day. I told the rest of the group have fun in the area, which they did tackling the 3 black trails we were parked at the top of. 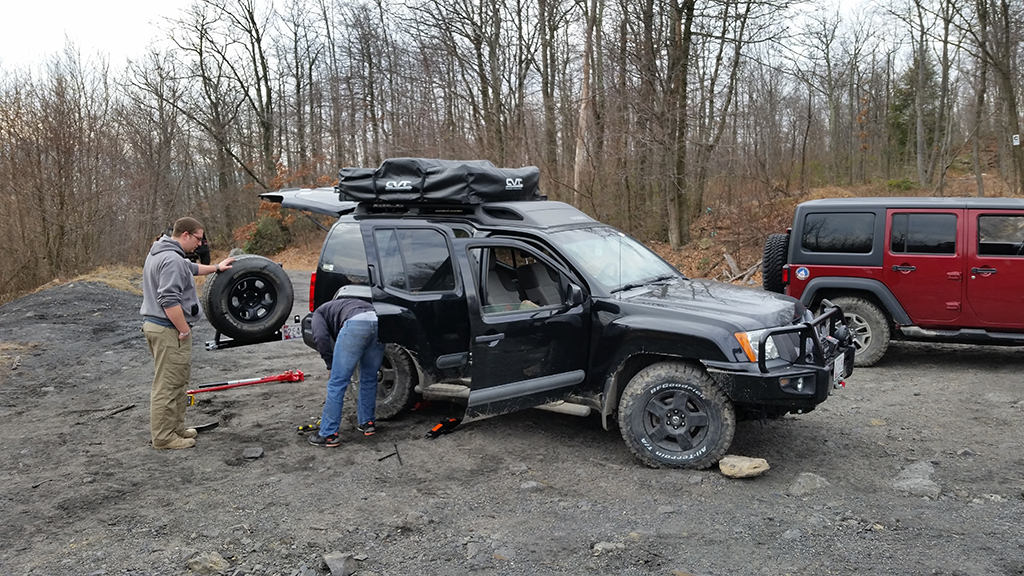 Since it was Patty’s first time out Cherie hopped into Patty’s Rubicon as a passenger to give her pointers along the way. Patty quickly grew comfortable and realized her and her vehicle were more capable than she had thought. We went on to C and came down Pole Line, letting everyone pick their poison from the 3 optional lines at the top. Some took much harder lines, some took much easier lines, still learning how to read the trail and what they’re vehicles could do. We stopped for lunch right next to the big mud hole at the bottom of the hill on Pole Line. I hoped groups crossing the puddle would provide some lunchtime entertainment. However since the park was practically empty the only group we saw in the water was a Jeep stuck in the deep mud on the one side when we arrived, but he was quickly retrieved, and they left. 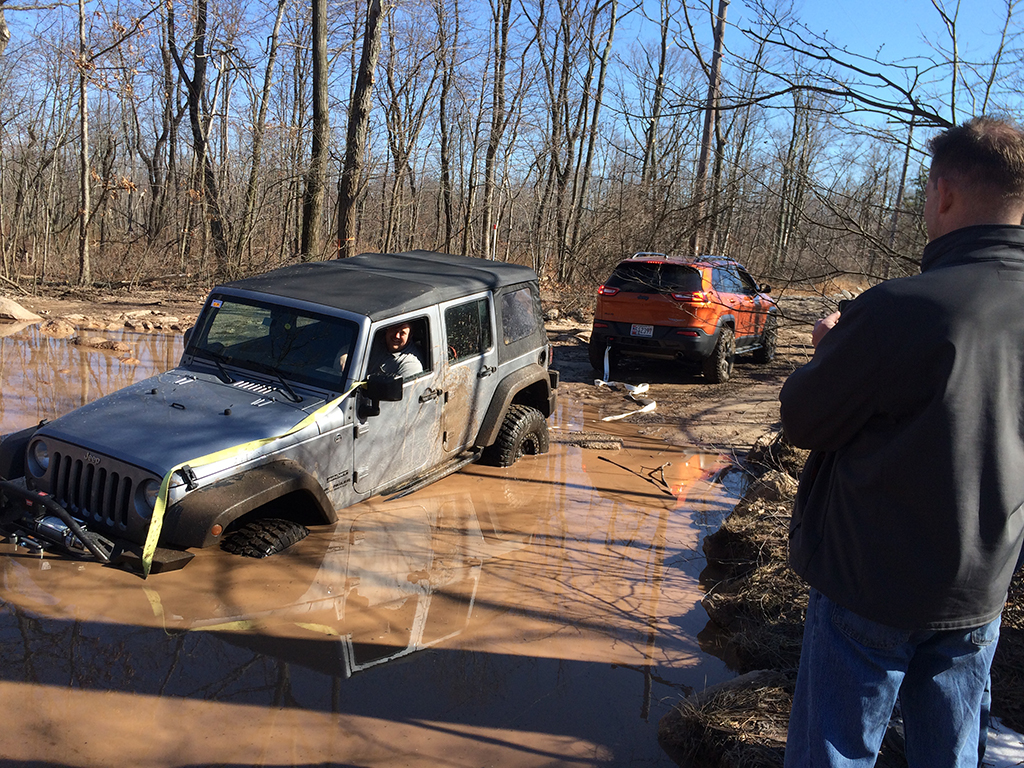 Playing in the water

So instead the group entertained ourselves, with several choosing to cross the “puddle” which was fairly deep that day. Kevin even tried the deeper side, but got both diffs stuck on rocks before the lower door seal was even in the water! Ed gave Patty and her son a few rides through the puddle and around some of the obstacles in the area showing them what a Wrangler was capable of with a good comfortable driver. Apparently that was exciting enough Patty’s son put his tablet down for a little bit and caused him to ask Patty for the rest of the day to “Drive like Ed.”

After lunch we took D, E, and Power Line. Some chose to tackle some of the side obstacles on Power Line. I knew folks in this group really liked the mogul section on 11, so that was my goal. We got down 11 without issue, choosing to go up and down it several times, with people hopping in each others vehicles to see the difference in how they performed. Kevin and I took a ride in Shawn’s Cherokee which apparently rode a little different than Kevin’s Wrangler! 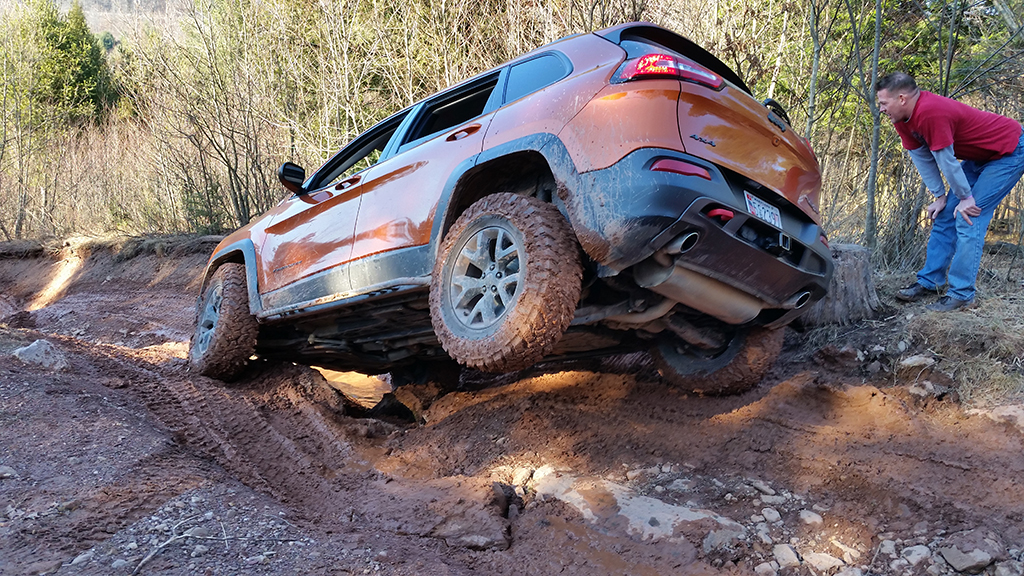 We had moved slowly through the park, enjoying some obstacles for a good while, and it was now getting late in the day. Since it’s the winter the park office closes at 5 and we had several people that needed to get back to get their new membership cards. So after a few of us tackled the small obstacles at the base of 11/JK Killer we turned around and headed back. We took 11 to H, Tower Road, then Pole Line and B. We decided we had time for a great group shot on top of the rocks in the Comp Course so we got everyone up there, or in front of it, and took some great group shots.

The day was one of growth for several in our group. Joseph had a pretty big smile all day, having tackled trails much harder than those he had found camping up to this point. Patty was beaming because her son was itching to come back out and go off road again with his mom who “Drove like Ed” on the way out of the park, the tablet apparently now seeming a little less exciting. Everyone else was pretty stoked about their 1st or 2nd trip to Rausch, ready to come back already. Kevin, Shawn, Christina, Cherie and I continued the evening at Twin Grove late into the night. As midnight approached we decided to call it a night. Kevin and Shawn, thanks again for the great trip idea, let me know next time the Florida/Canada gang is getting together again and we’ll have to do this once more!