Last year on July 4th weekend some CORE members got a chance to run Shoe Creek Trail. Little did we know at the time but the trail was being closed behind us. Shoe Creek Trail crosses a section of private land in the center portion of the trail. The trail was open because the landowner(s) were willing to allow trail traffic to cross their land. However, on July 5, 2015 the owner put up gates across the trail denying access across his property from both sides. This trail report is written not to stir the pot or discuss blame or anything like that. Instead its purpose is to give a clear and concise description of what is and is not open regarding the Shoe Creek Trail.

Several members of CORE ran the upper and lower sections on Memorial Day weekend and recorded how far you could go from either end before hitting the gates. As you can see in the pictures the gates are similar to what the NFS uses and so these gates are easy to identify. From the southern end of the trail much of the more interesting water crossings are still open and accessible. Moving at a casual pace it took us 30 minutes to get from the trailhead to the gate. The southern end of the trail ends on a shelf road just around a curve. There is a small campsite just before it that is a convenient turn around spot. 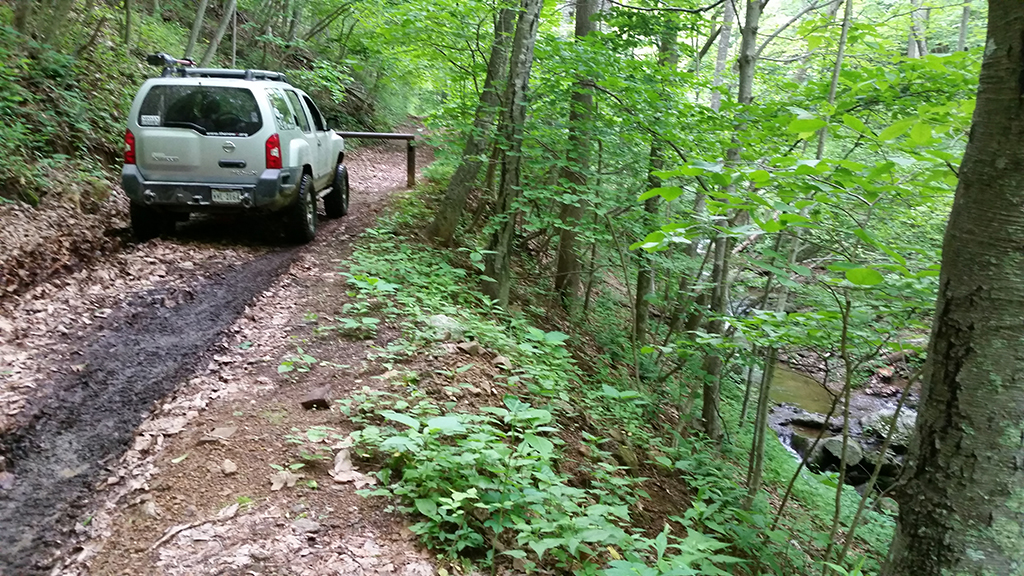 View from the Southern Gate.

Just to be clear, despite all the campsites along the trail, these are not to be used for campfires or camping, per the notice linked to below.
http://www.fs.usda.gov/Internet/FSE_DOCUMENTS/stelprdb5440375.pdf

The southern end of the trail therefore is about a 1 hour round trip in and out, but could be extended if you stopped for lunch or pictures or to let your kids play in the water for a bit midway through your ride.

Also noteworthy are the spider trails and other offshoots from the main trail. The trail up to Slick Rock is still closed as well as several other side trails. These are clearly marked with gates and signage and so should not be traveled on by vehicle. In addition to those closures which have been up for sometime, there has also been some effort put into stopping people from going onto the various side obstacles that are just off the main trail. This effort appears to be done by the Forest Service. These have all been modified with a large deep trough cut perpendicular to the direction of travel across these side obstacles. These modifications are obvious as you approach them because of the disturbed clay and straw put on these, but we did note while walking around one that the trough was largely filled back in with leaves and so the depth of some of the troughs may not be blatantly obvious to someone that just decided to drive up onto the illegal obstacle. The pictures of these modifications don’t do them justice. Be aware that these side obstacles are not part of the trail and so should not be attempted.

From the northern end the trailhead officially begins after the parking area for the Crabtree Falls hike. For those not familiar with the area, the road to get to the gravel lot for the hike is traversable by a car but does include some bumpy road sections and water crossings so is an interesting drive in and of itself. From the paved road to the hiking trail parking lot is a 20 minute drive at a casual pace. Note that there is a vault style latrine still available at this parking area.

From the gravel parking lot to the gates on the north end is about a 20 minute drive also. At the gate there is space for one vehicle to do a 4-point turn, but again there is a campsite just before the gate that is a much easier spot to turn around at. Note that in the GPS track below the northern track is mostly dirt road between the paved road and the gravel parking lot. The portion of Shoe Creek Trail that is still open is roughly similar in length from the north or south end. Approximately 1/3 of the trail is now closed. The closed section includes the rutted out section known to many as the “Bullpen” or “Playground” amongst other names. 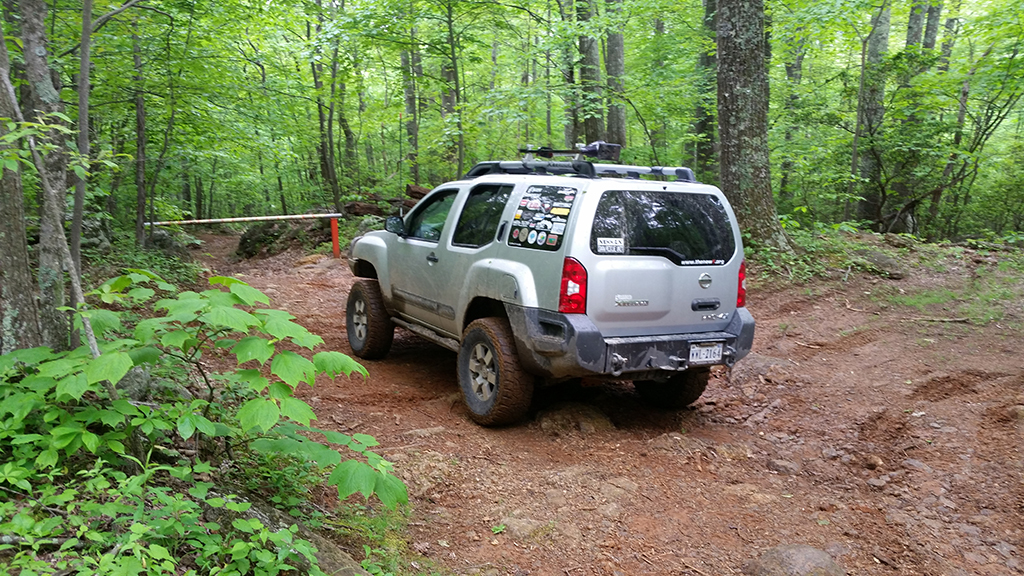 View from the Northern Gate.

Click following button or element on the map to see information about it.
Lf Hiker
| E.Pointal
contributor