1. Taxes: it doesn’t matter if you’re represented or not, they’re still due on April 15th. With a fresh refund ready to be turned into Jeep parts, I knew I needed to get back out there. This run seemed like a great time–wheeling in one of my favorite forests, a chance to visit Luray Caverns, and an opportunity to meet a new club: Alpha and Omega Offroad.

Driving to Edinburgh presented few obstacles. I noticed some bump-steering from the LJ on my way west, and made a note to take it easy on the trail. Overall, I-66 and I-81 proved to be a beautiful spring-morning drive, and I made it to the Shell station without incident. While I fuelled up, the first few rigs from Alpha and Omega arrived.

Here are the rigs that joined us:

2. Roland Thro kept us organized. Under his guidance, we took roll, checked radios, and called up the stragglers. He personally guided the last few rigs from the Shell station to the trailhead. Once regrouped, we got on the same CB channel, and held the drivers’ meeting. With a full and fully-briefed complement, all aired-down and ready, Roland led the way! 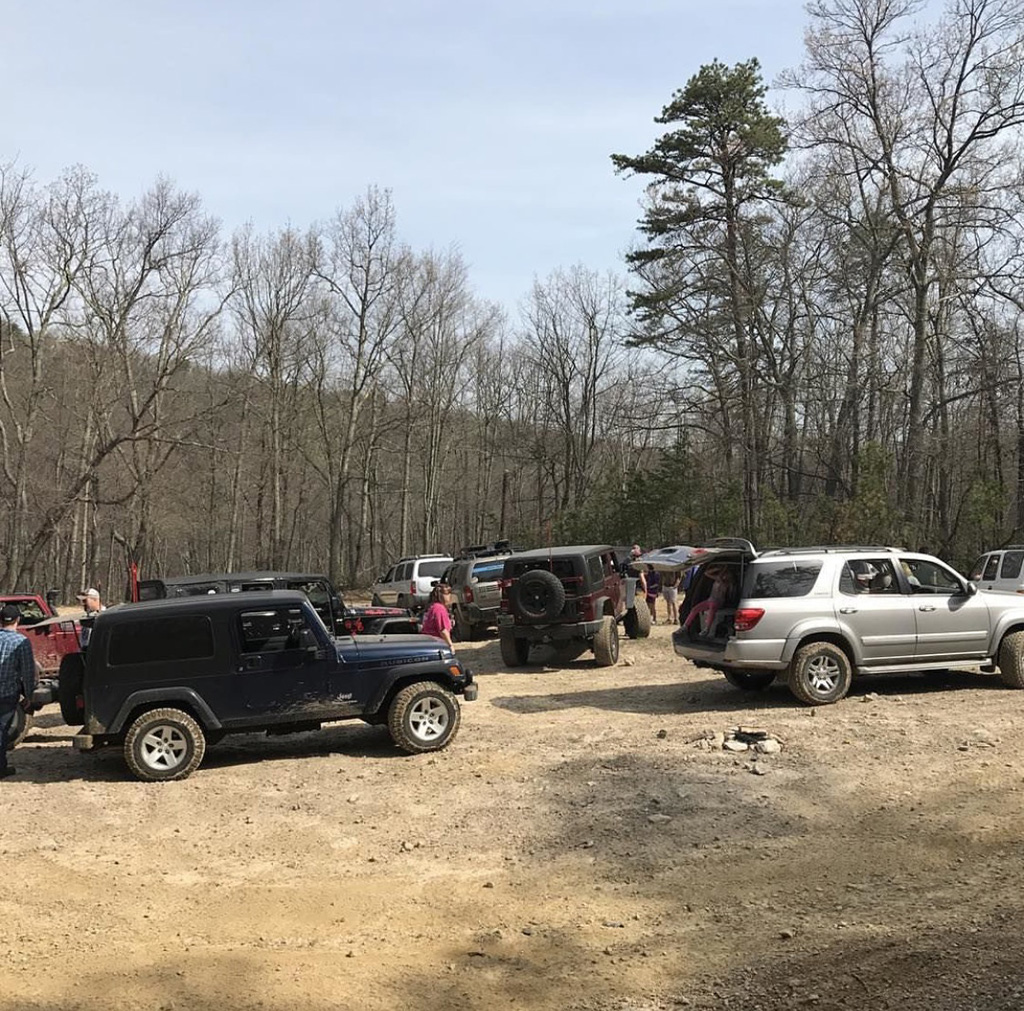 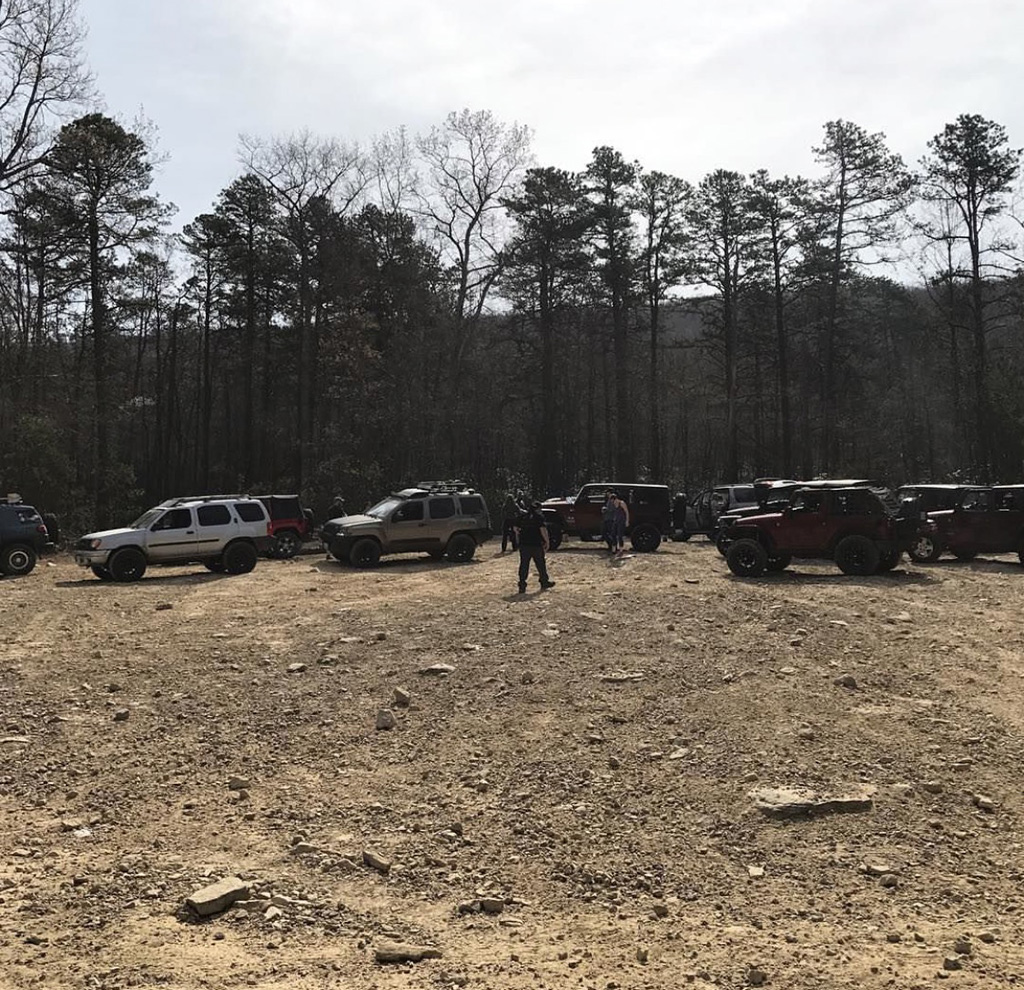 My first impression of the trail showed it Corolla-friendly. I ran the first half-mile or so in 2WD, but quickly engaged my front axle. A bone-stock TJ would have zero problems on the trails. While we were there, the trails were nice and dry. I’d compare the lines favorably to a dry logging road. My only concern was some noise that sounded like a loose steering component.

Roughly 2/3 of the way through the trail, we found a more advanced obstacle. Roland bravely lined up to the puddle, but even his lockers couldn’t get him out. Walter Krebs borrowed a winch off of a JKU, and made short work of the stuck FJ. At this point in the day, we were focused on getting to the second staging area for lunch. When I got there, it quickly became clear that lunch would wait. 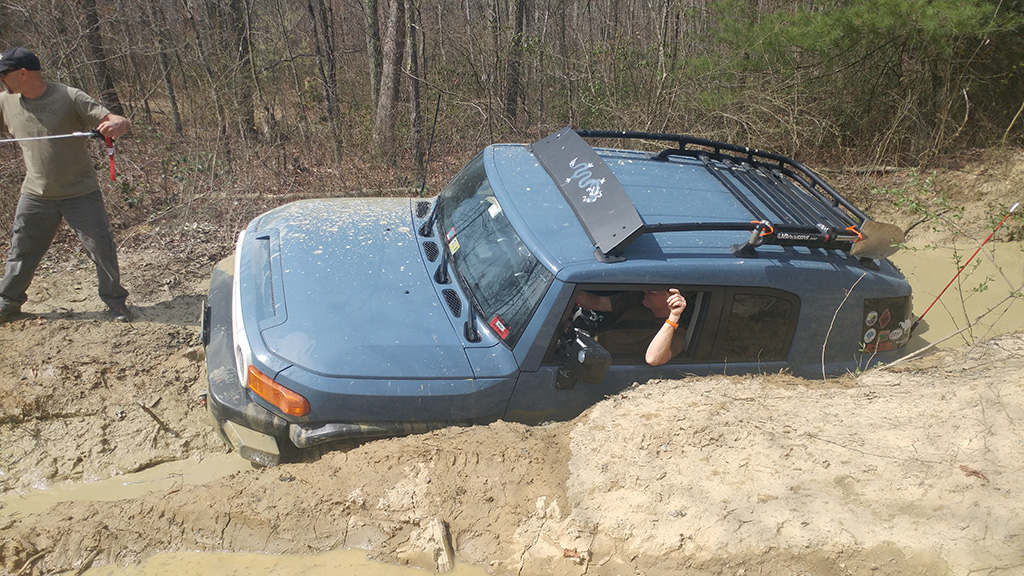 Three guys were using the shade from the trail map when I arrived. They found their way on dirt bikes, but one of the bikes had a cracked engine block. That bike wasn’t gonna move, and CORE/Alpha/Omega was in a position to help them out. Ultimately, Jon Devane (John with the 4Runner) and Adam Tweedie(silver Xterra) drove the rider with the disabled bike back to his staging area. From here, the report splits from the planned day to the day that Roland and I shared.

3. For the rest of the planned weekend, Pattey Taylor adds the following: everyone was gone while we packed up from lunch and hit the road to head to Luray. We took the back roads down (678 & 675) and it was beautiful. “We” was myself & Chris, Sabrina & Tony in their black JK and Forest & Britney (&kids) in their Toyota Sequoia. Brett & his family decided to go eat lunch at a restaurant, and we all decided to meet @ Luray. We finally got to the Caverns and got into line (30-40 minute wait, but seemed to go quickly) and called Brett. They were 40 minutes away in Front Royal & weren’t done eating, so we just went ahead. I feel badly, but we never ended up seeing them.

We went through the caverns (gorgeous, cool temps, lagged behind the group & took some great shots), the car museum (which had some wicked vehicles from horse drawn to 1940s era), then the museum across the street, that was a quick run through of the area, etc. We went into town a couple miles and found Uncle Buck’s restaurant. They had an awesome menu…but food (appetizers too) came out 50 minutes after ordering & wasn’t great—-BUT it left room for ice cream next door at the Sugar Shack, where we met the owner and he was wonderful. Ice cream wasn’t too shabby either! By then, it was a little after 8pm and we went to our hotel to sign in. (Best Western In town of Luray) I think everyone was asleep by 9:30pm!!! LOL!!! 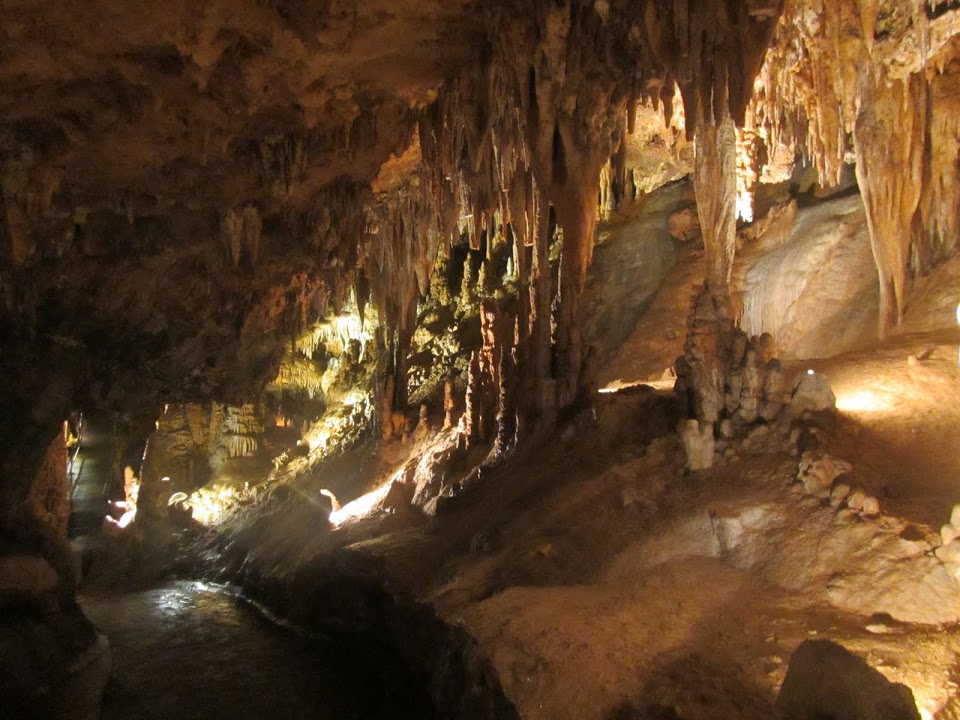 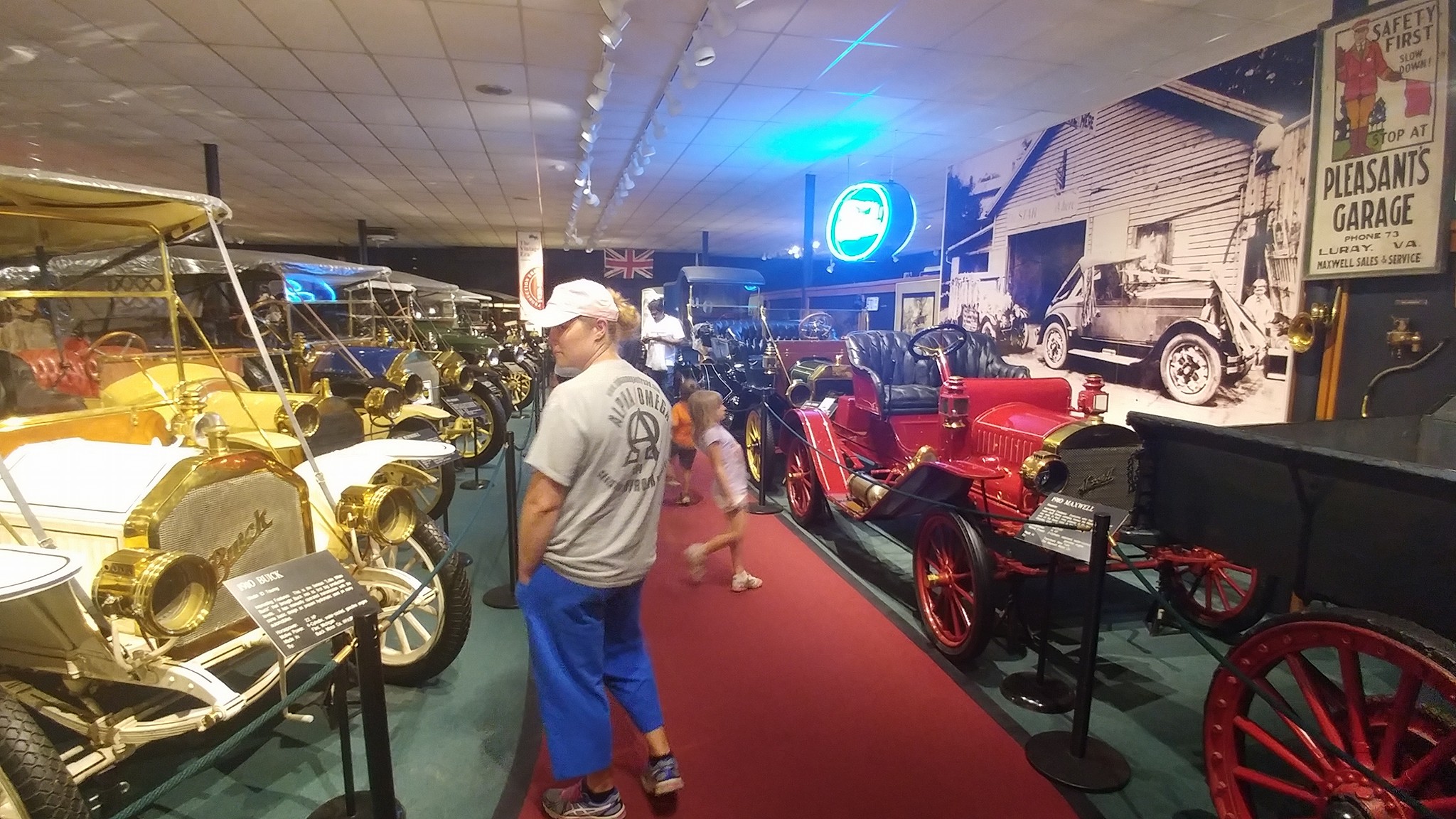 In the morning, we got up and met for breakfast at 9am @ Alexander’s restaurant, which was attached to the hotel. The coffee rocked and the food was cheap & even better. We packed up and took off for Skyline Drive at 10:15 & were happy that it was a “free fee” weekend! We stopped at every overlook and took pictures, soaked in the sun, met people, my husband terrorized the kids, etc. We took our time. Then finally arrived @ Dinosaur Land! We paid the $6 for the tour of their dinosaur display (both 1960s style props and newer fiberglass ones!) It’s cheesy goodness and we loved it! It’s sad there aren’t more places like that! Then we took off from there around 2pm, grabbed lunch down the road, and headed home. We got in around 5:30. It was the best weekend!!!!

4. While the rest of the group continued, Roland and I pursued a plan to get the FJ home. From the dead batteries and the time the FJ spent in the puddle, it sounded like Roland needed a new alternator. The obvious plan was to find the FJ a new alternator, then swap it in. We piled into my LJ, then drove to the nearest gas station. Once we had cell service, we found that the local tow companies were reluctant to move the FJ. I found an auto parts store (rhymes with Motto Groan), but couldn’t get an alternator for the FJ. Momentarily defeated, we searched for an alternator that would work. Toyota dealerships, import shops, and parts stores of all flavors held no joy–for fifty miles. We needed a Plan B.

We had two rigs, one working alternator, and zero movement. We needed a plan.
We were out of good ideas, but I had a bad one that seemed like it might work. I knew I had the right voltage for a lead-acid battery, courtesy of my alternator. If I could safely wire up a second battery to the alternator, and feed it enough current, we could charge a battery. If we could charge two batteries, we might be able to get Roland’s FJ off the mountain and onto a flatbed home. So…that’s what we did. It worked better than I expected–we ran from Woodstock to Tysons, and got Roland’s FJ to his preferred mechanic. 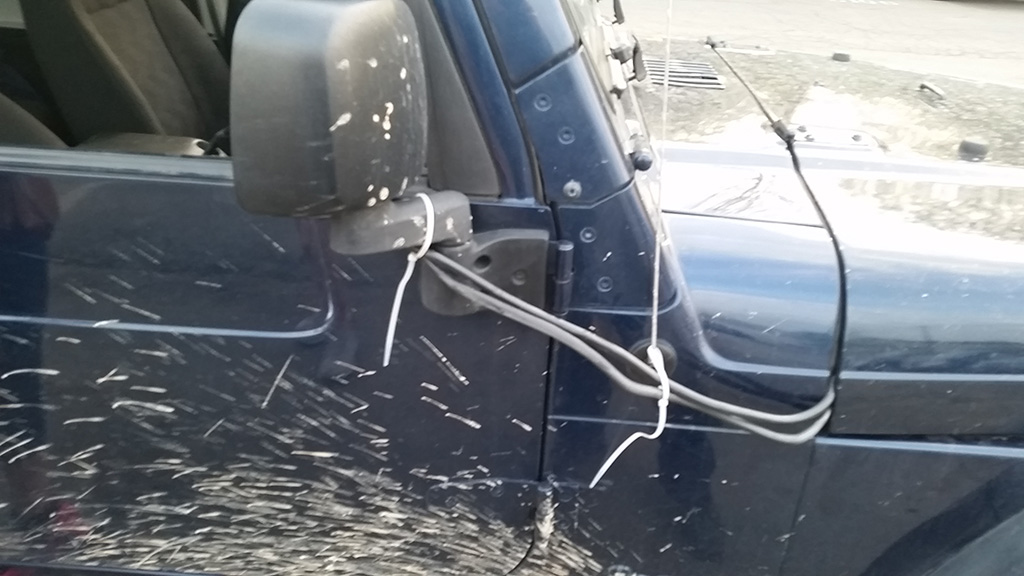 5. Technical Addendum: If you find yourself in this situation, you have a few options that don’t involve a tow truck. This is, however, free advice that comes without any warranty, implied or explicit. First and foremost, if you can, replace the alternator. I’m aware of two tests that can tell you if the alternator is bad. While your rig is running, pull the negative battery cable. If your rig keeps going, your alternator is probably good. The second test needs a voltmeter. Start your rig, and look for a voltage between 12.7V and 14.0V. If you have a cell signal, check the specs for your particular rig. Lead-acid batteries are “fully charged” usually read between 12.6V and 12.7V. Anything below that is a partial charge. Further, any battery that reads below 12.0V and can’t be charged any higher is probably not useful.

In this particular case, we had two good, albeit deeply discharged, batteries. To get us home, I made a multi-battery setup. In principle, multi-battery setups reserve one battery to start the rig. The remaining batteries are disconnected from the electrical system until the engine has started, then are connected to provide drive accessories (light bars, coolers, winches, etc). My setup ran a battery lead directly from the ground terminal of the original (starter) battery to the second battery. From the positive lead of the original battery, I wired an 80 Amp fuse, cutoff switch, and a positive battery lead. To start my LJ, I opened the switch (disconnected the battery), started the engine, then closed the switch.