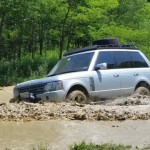 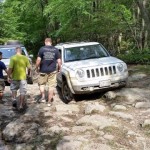 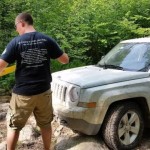 Summer time brings busy schedules, and June was slipping away quickly without any trail rides. Several CORE members were itching to get out on the trails and the opening of a new off-road park in Northumberland County, PA provided a perfect excuse to go exploring.

Anthracite Outdoor Adventure Area (AOAA) is a 6500 acre motorized and non-motorized recreation facility in Coal Township, PA. It began its inaugural season this year on May 17th and has already become a huge draw for the off-roading community. The site is still in development but parts of the land are currently open to off-roading and hunting. Future plans for development include hiking/biking trails, equestrian trails, camping facilities, and expansion of their ORV trails to include challenge courses and training courses. We should expect major developments over the next few years and it was very exciting to be among the first trail riders to explore the land.

He made it about 3/4 of the way up before finally giving in and pulling out the winch.

Since the trip was a bit last minute, it took a bit of planning to get everyone settled on meet up times and locations. We decided to make it a day trip – and considering the park is 2-3 hours away from everyone, it was a long day trip! We had planned to meet up with Kevin/Tyler and Erik/Chris at the GetGo gas station (1000W Patrick St, Frederick, MD 21703) at 7 am. Unfortunately Erik/Chris hit a bit of a snag and said they would have to meet us at a later location. The second location was a rest area just north of exit 77 on I-81 in PA at 8:30am where we met Larry. Apparently we weren’t the only ones using it as a meetup – the entire parking lot was full of Corvettes! By this point we were running about 15 minutes behind, but weren’t in a huge rush because Erik said they were running behind as well. We decided to stop off one final time for our final gas up at a gas station about 15 minutes from the park (Food Mart @ 2862 Fairgrounds Rd, Ashland, PA 17921) and then headed to Anthracite.

The park entrance was well defined and they have a huge parking lot (half paved and half unpaved) for all of the vehicles. There seemed to be a handful of 4x4s there but mostly trucks that had obviously carted in dirt bikes and ATVs. There is a small building near the parking lot that is where you check in. Every driver and passenger needs to fill out a bit of paperwork and then pay the park fees ($25/driver, $10/passenger). The building has a restroom facility, meeting rooms, and maps of the trails. We spoke with some of the 4×4 guys in the office and they told us a few things about the property and what we should expect. There is a main road that splits the open property in half. The North side is much tamer and stocker friendly while the South side is a bit rougher and has rock gardens. We decided that we would stick to the North side for most of the day and maybe hit the south side later in the day. We all aired down and hung out in the parking lot for a bit until Erik and Chris showed up. We headed out onto the trails around 11 am.

We decided to drive all the way down the main road (which is graveled) and cut into the trails on the North side to work our way back to the entrance. We quickly found that the map they gave us didn’t necessarily have all of the trails, and there were some trails parts that just didn’t exist! We assume since the park is relatively new, that they still have some kinks to work out. It didn’t make it any less fun! (well perhaps a little less fun for me trying to navigate!) The trails were great and there was a huge variety of terrains in the park. Unfortunately none of the trails are marked (yet?) with level of difficulty or terrain. One moment we would be on sandy desert-like trails, then driving through mud, rock gardens, and then tight pinstriping trails that didn’t seem large enough for full size vehicles. Hopefully once the park becomes more established there will be some additional labels on the map. We also managed to get lost once or twice going down unlabeled trails. The property is bordered by private lands and drivers must be extremely cautious about driving on to non-AOAA lands. Due to the poorly labeled map, we found ourselves turning around several times.

The trails seemed to go by quickly and we found ourselves back by the entrance before we knew it. We headed back onto the trails a few times hoping to find some clearing with a bit of shade to eat lunch in – with no luck. All of the trails are pretty tight and we never found a decent place to eat. We ended up going back near the entrance on the main road and stopping to eat lunch. It was a nice area, but no shade other than what our tailgates could offer. After lunch we decided to go back out and do a few more trails on the North side before Larry had to leave. We decided to explore the trails near the entrance of the park but it turned out that they were poorly marked, filled with trash, and not well maintained. We decided to head further into the park, hoping to find a better place to drive – and we did!

We hit several great trails that were full of mud. Andrew was in the lead and testing out the depths of all of the mud puddles. We came to a split in the road and the right side had huge mud puddles. Andrew decided to drive out slowly and check the depth – and sunk! It was a soft bottom and sucked the car down to the frame. After several minutes of back-and-forth he finally managed to work his way out of the mud – it made a huge mess!. We sat around for a bit trying to figure out our next move when two kids came by on ATVs – and decided to try their hand at the mud puddles. The first kid rode in an almost immediately stalled his engine and was stuck, up to his knees in muddy water. The other ATV tried winching him out but didn’t have enough mass to drag him out. Luckily we were there! Kevin drove up and let the kid hook up his winch to his bumper. With a bit of finesse the ATV came out and he was able to get it started again. He got stuck in the mud pit Andrew had sunk into, and the ATV driver quickly found this to be deeper than expected too. Eventually they rode off on the dry side of the trail.

By this time Larry needed to head home, so we went back up to the main road and said goodbye. We decided to try one more trail on the North side that would take us along the edge of the property and by the highway. The map was labeled incorrectly (and we may have driven past some cut up caution tape) because we ended up at a dead end, on the side of a cliff that dropped down on to the highway. It was a great view, but a scary place to have to turn around! Turning around put as at the bottom of a very steep incline that was full of loose dirt, mud and football to basketball sized rocks. Kevin was the first to try to make it up, and it just wasn’t happening. He made it about 3/4 of the way up before finally giving in and pulling out the winch. He winched up the rest of the way and turned around to help Erik. Erik chose not to take the bypass (which is not on the map) but instead try his luck on the hill and made a valiant effort up but was stopped at the same place as Kevin and was winched up. And then the Xterra gave it a try and made it look easy – gotta love those Mickey Thompson ATZs! There were a couple more rocky hills on our way back to the main road and everyone made it up with ease! (Just a little momentum and picking a good line.)

It was about 4 pm at this point so we only had a few more hours left before the park closed. We decided to explore the South side a bit. We knew it was a bit rougher over there and were a bit concerned about the stock height of Erik’s Patriot – but we figured we could always turn around if these got too rocky. The trails on the South side were fantastic! Rocks and streams, large fields, off-camber – it had everything! It was definitely tough on the Patriot but the trails had room for picking a good line and Erik skillfully maneuvered over everything. It was great experience and had everyone outside their vehicles spotting him. He only got hung up on one rock and it was a great excuse to pull out a tow strap to tug him over it. The rock sliders and skid plates definitely came in handy but it was a great challenge. We finished off the trail going down a long rocky slope onto the main road.

At this point Erik was running low on gas so we headed back to the main parking lot to park his Jeep. We decided to leave his Jeep there and he hopped in with Kevin and Tyler so we could do one last hour of riding before the park closed. We decided to take a few of the more aggressive trails that we had seen on the south side. There were plenty of rocky hills and it was a blast playing around on them. It was a shame the sun was going down and the park was closing! We headed back to the parking lot and aired back up. We discovered that Kevin’s side wall in one of his tires was torn up pretty badly. We considered changing it there but Kevin decided to risk the drive home and thought it sounded like a much better idea to have AAA change the tire if anything went wrong. (I have it on good authority that this gave him a great excuse to buy a shiny new set of tires when he got home!) After we headed out of the park, Erik/Chris and Andrew/Cherie decided to try out a local restaurant before we headed on the long journey home. We seem to have a habit of finding local pizza places everywhere we off-road with Erik so to keep up that tradition we found Ashland Pizza just up the road. It was fantastic!! We got back on the road around 9 pm and thankfully stayed awake for the three hour drive home. It was a long but great day. Anthracite is a work in progress and we are all excited about its future development and are excited about heading back up there again in the near future.

Some key features we found that were noteworthy: