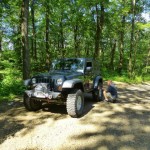 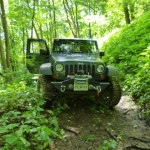 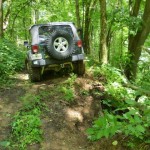 This past Saturday (the 6th), Larry and I went up to Casparis to do a little reconnaissance/exploring to see what was still open. What a surprise.Good news is, the main entrance and most of the place is still untouched. Well, there are new signs up from the PA Park Rangers warning of the dangers about the old mine shafts and such. Which have disappeared, in a way. The hill that they made to block off the mine shafts has blended into the rest of the forest now. It’s completely overgrown. If you’ve never been there before you would drive right by it and never know. The only sign that there’s something more to the hill now is that in a few spots you can feel an ice cold wind blowing out from the trees. There is still a path that can be used to get to the top where you can get into the mines and explore. Still looks like it’s a major pain in the ass to get up there. We didn’t try, and instead moved on.

So, Casparis has turned into something wild.

Interesting note here is that they seemed to have re-opened this part of the trails and you can now drive past the mountain and continue on the trail that leads to the overlook. Before this was blocked off as part of the mine closure but looks like they’ve re-opened it. No signs saying otherwise.

We got back onto the main trail and headed to what used to be the start of the “jeep loop” (as I call it, read the past trip reports and you’ll know why). And a few spots that had some nice rock climbs have now been closed off. Signs posted at the obstacles say to not use these paths. Stamped with the good old PA Park Rangers symbol. So that sucks.

Anyway, so we get up to the top where there used to be a small clearing and two trails venturing off the main road. This used to be a clearing that was no bigger than a few hundred feet. Now it’s several foot- ball fields. Trees cleared in every direction. And here’s where I started to get a little lost. All my markers were gone.

So anyone that remembers this trail, the first part of the loop consisted of a very long and rather steep downhill. But it wasn’t that bad. Now it’s bad. So bad we slid down half of it with all 4 wheels locked up. It’s clay. Sticky clay that makes even the most aggressive tires turn into slicks. We used a small flat to turn around and floored it to get back out of there because it only got worse. And being the only rig made us rather uneasy about the return trip once at the bottom.

So now what. Well, I said we should try the loop going backwards instead. The return part looked untouched when we came in so let’s go that way and run the loop as far as we can backwards and see where it stops. Worst case we’ll come up to the bottom of this nasty clay hill.

So off we went. And damn.

So again, good news bad news. Good news, it hasn’t been touched. In years. Trees hanging over the trail. Overgrowth in some parts. True wilderness off-roading.

Then we almost fell off a cliff.

No, you read that right. So there’s this one part that is a set of switch backs. But steep switch backs, and long. So we had this sudden 30 foot drop to our right with a sharp hill going down several hundred feet with nothing but trees to slow your tumble. And we hit a wash out. And a fallen tree.

Ground gave out a bit which made the Jeep shift and hit a tree on the side of the trail which then knocked the rear end sideways and left us hanging. Back right tire was almost in air. Just some tree roots holding it up. The left front tire had piled up mud behind it and was sort of clinging onto the trail for us. I think Larry and I both needed a moment to get unstuck from our seats.

So a quick walk about and scouting made us break out the winch for its madden voyage. Found a nice tree. Wrapped a saver around it and latched up. Told Larry to just steer it hard left and let the winch do the work. Slowly we got back on the trail. As were winding and packing everything up, Larry says he’s done with this trail and ready to start heading out. Sadly, the only way out was to either keep going which would be several hours and maybe worse terrain or turn around… Aren’t those just great options after something like this just happened?

We opted to turn around and went down the trail to the switch back and used that to get turned around. When we got back to this spot, we took a moment to pick the best line to avoid falling off again. Still almost got us again, but some quick raw power and we got away. From there we back tracked to the logging area and headed out the road that ends at Sandy Flat. Turn here, mud hole there. Nothing too exciting. Till we hit a fork in the road that didn’t look familiar. Right or left? Let’s go Left, that’s going northish vs. the right which looks like it goes back into the hills we just got out of. FYI, go right.

Turns out the left heads up to Wills Rd, an entrance I had never found. Look back on old emails I was told about it but never found it. Got it marked on the map now.

Think our day was over? Not quite. Aired up but between that and the earlier winching and only idling about since, the battery hadn’t recovered and didn’t have enough juice to start the jeep. Thank god for stopping on a slight hill and a manual trans.

What a day. And from our starting spot in town down all that and back was only 16 miles. Took us 4 hours. We need to go back again but this time with more than one vehicle. These trails are just too wild to be exploring alone. Who’s ready to really get dirty?