Roland had the idea to do another trip to Big Levels again this year, on Memorial Day weekend, just like we did last year. Even though he eventually had to back out of the trip I was happy to still host it since we had a good number of folks interested in the trip. In addition to that this year was fun for me because my Mom and Cherie’s Mom and Dad, along with Cherie and I, were camping in the nearby Crabtree Falls Campground all weekend, and they came along for the off roading as well. It’s always fun to share our past time with family. We also had friends from Florida along as well as the head of the Virginia Xterra Club present! Along for the trip this year were the following folks:

After a slightly later than planned start we headed out from our gas station meeting place and eventually found ourselves at the northern trailhead. We stopped to air down, secure all our belongings, and had a quick drivers meeting. Then we hit the trail!

We immediately noticed that the trail was much wetter on this day than it had been historically. In many places streams were basically running down the trail. It made for slick rocks and a slight change in atmosphere, but nothing that anyone needed much help on. It did make me wonder what the large puddles ahead would look like though!

At the two spots where there were options to take an alternate route we chose the left path. At some point I need to come back and explore the first alternate path which I’ve never been on. This eventually led us up the most challenging rocky section. Although passable in a stock 4×4, those with more built rigs took slightly harder lines in this area. Once at the top we stopped for lunch and to enjoy the overlook just off the trail. It was while enjoying lunch that we ended up meeting Ty Prettyman and his son coming the other way. They were out enjoying Ty’s new Jeep, and the sights. We exchanged info regarding trail conditions from the directions we had each come from, and found out Ty also lives in the DC metro area! We hope to see him on the trail again soon. 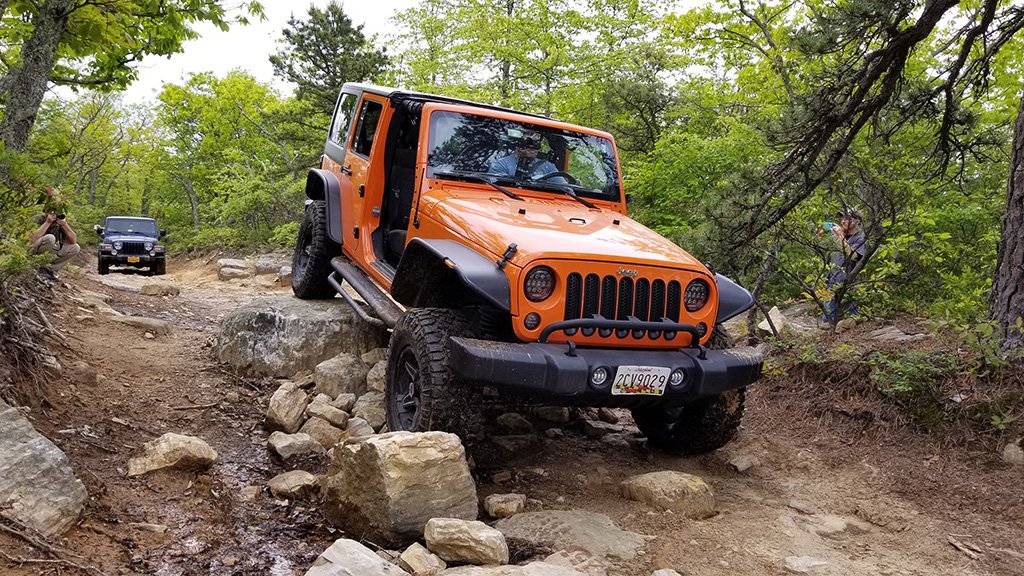 After lunch we got to the section of trail that had some rocks, and so I asked Sid and Linn if they wouldn’t mind hopping out and getting some pics of folks as they drove by. I announced to the group that I had release two “Organic Obstacles” onto the trail, and to please watch out for them. The jokes that ensued regarding my “Organic Obstacles” continued and I eventually was able to retrieve them and put them back in appropriate containers! We had the idea of putting the title “Organic Obstacles” on the back of some CORE t-shirts in the future. Could be funny.

The southern part of the trail normally contains about 3 large puddles. This day it was different. As we neared the area where I expected to find the large deep puddles we discovered that with the recent rain there were about a dozen puddles. All large, many deep, and many hard to tell which of two options was the shallower one! I often found myself gauging which one to drive through by checking for Ty’s tracks coming out, knowing what his capability was compared to the vehicles in our group.

At one point we got to 2 large puddles side-by-side. I got out and determined that I thought the left one was probably passable but that the right one looked very deep. Cherie suggested I tell everyone on the CB, but I didn’t because I figured we were all bunched up and so they’d see the person go through in front of them. Also I figured people were probably getting tired of me talking on the CB! About 90 seconds after we got through we heard a concerned call by Cherie’s mother Linn over the CB. “Um, which puddle did you guys go in? Because we’re going through the one on the right and it’s really really deep!” That was followed by Carries “Momma’s rocking it in the truck!” as my Mom apparently chugged right through the deep side! Later we found out that the truck had floated slightly for a moment in the puddle, but I think with her steady throttle/momentum and those new Wrangler Duratracs they had just put on, they had a strategy that worked to get them out on the other side! By the end of the day we had identified two puddles that were approximately 3ft deep on this day, instead of their usual 24-30in. 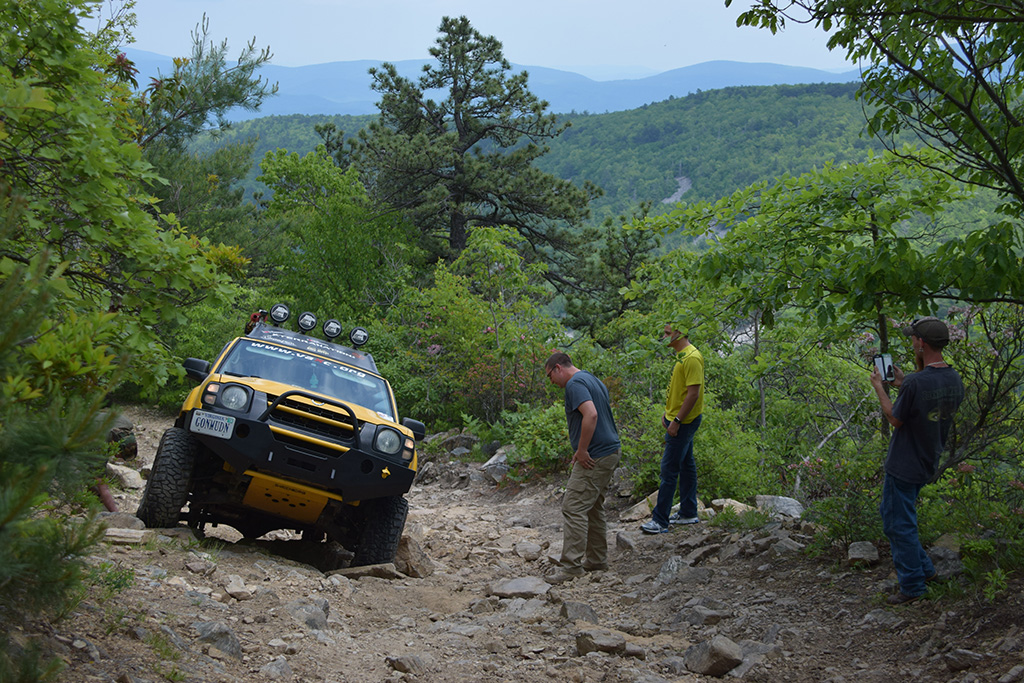 Our other excitement came when Carrie realized her Xterra was running a bit hot! We realized the oil was a little low and so decided to add more. Unfortunately no one in the group had oil. As we assessed the situation a Jeep pulled up behind the group. He didn’t have oil. A few minutes later another Jeep showed up. He did have oil and was happy to give it to Carrie, and then away we were again!

As we neared the end of the trail we started seeing more people camping again. We also found out severe thunderstorms were imminent, and we had a few vehicles without doors! We found our way out onto the Blue Ridge Parkway and all pulled into the overlook to air up. Kevin and Shawn and Mike, with the Jeep doors removed, aired up quick and then headed out hoping to quickly return to the nearby gas station that held their doors! The rest of us finished airing everyone up. From what I could tell everyone had a pretty good time, so I guess we’ll just have to do it again!