One sunny saturday a bunch of us all agreed that it was the perfect day to climb a mountain just to see the view. The spot we chose, Flag Pole Knob located west of Harrisonburg, VA within the lovely GWNF. Out on this trek with their vehicles of choice were:

A few of us decided a breakfast of champions with a fitting view of mountains was a good place to meet and start the day. A Denny’s in Strasburg fit the bill. Fed and happy, we hit the road to join with everyone else at the Sheetz in Harrisonburg. We arrived to quite a crowd of eager off roaders. We got our lunches to go and our rigs gassed up. A quick meeting got all the drivers in sync with our route plan and details of our adventure. We would head down US-33 to Skidmore Fork Rd and take that all the way to the top. After lunch on the knob, we’d head back down via Union Springs Rd.

I remember this trail being very stock friendly. So friendly, I’ve taken my stock s10 blazer up it dozens of times. I was informed that over the years, it’s gotten a little more challenging and we’ll have to be careful for some of the new folks and make sure they get over the obstacles intact. At first, I thought “it can’t be that bad?” but later I happily learned that the trail has really become a fun challenge.

The first mile or so was only challenging because we needed to find a place to air down everyone without blocking the trail. We were going to use the clearing near the boat ramp but some mis-communication made us go past it. Found a nice side cut to use instead.

Aired down and everyone lined up in a happy order, we started our climb. It was a beautiful day and the tree top canopy provided plenty of shade all the way up. It was a good steady climb with no real challenges.

We hit the T in the road and a few wanted to run down to the left to see the rock obstacle and come back up it. We would be going down later, but I heard it was a bigger (and more fun) challenge to come up. The rest of us headed to the knob. Took the easy way up to the clearing. 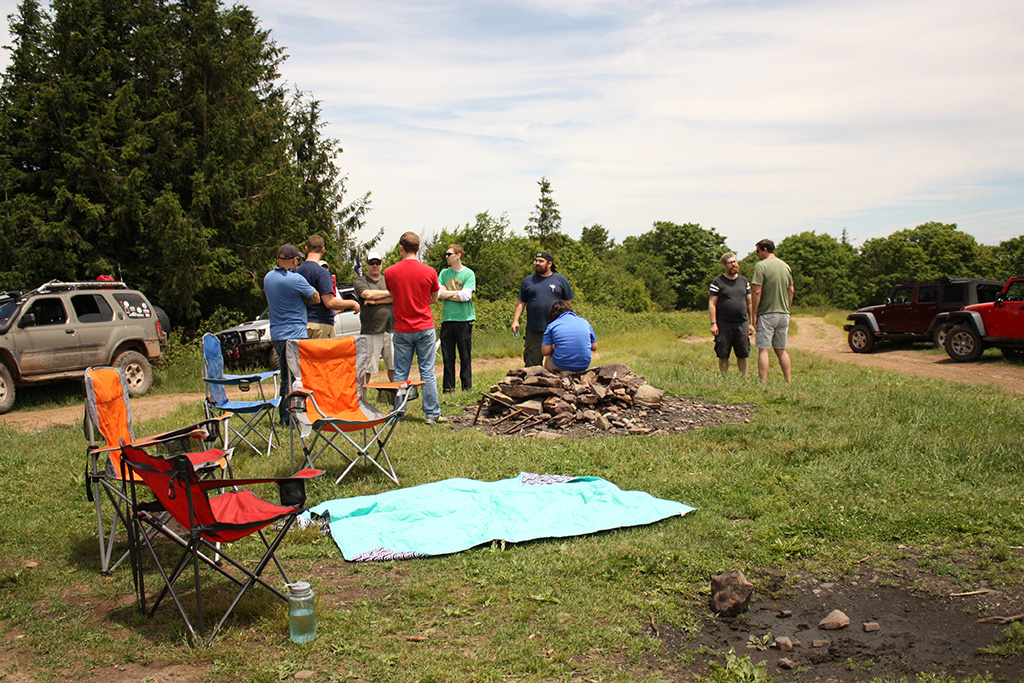 And what a view. Weather was definitely in our favor. Could see clear across the valley. We broke for lunch and chit chat. Plenty of pictures ensued as well.

Now the easy part was over. Time for the fun. Heading out after lunch I decided to take a more fun, which means more flexing, path off the knob. A few joined me and the rest went around and caught up down the trail. The fun path takes you over two full flex hills and can get you on three wheels if you don’t pick a good line. Can be a good suspension test.

We headed back the way we came till we hit the intersection for Skidmore Fork. To get down the mountain we went straight instead. This part of the trail became very rocky and had plenty of small challenges. The first big event was the drop.

The drop is this series of stepped rocks. There’s 3 or 4, depending on the line you choose. This drop will rip your bumper off and bend a drive shaft if you take it wrong. Spotting was needed. And some more rocks. We stacked a good bit of rocks to ease the drops for the stockers among us. One by one we each came over the edge and each with a bit of a pucker factor and white knuckles. 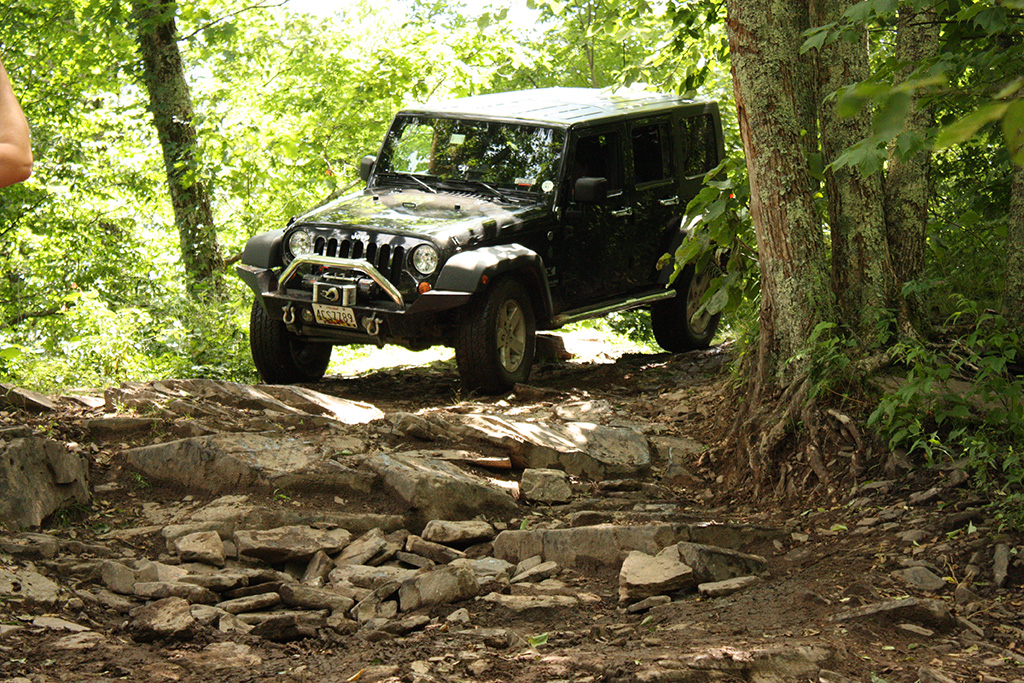 Thought we were done with the hard part. Trail was just getting started. Past this point is several gradual hills going up and down littered with soccer ball sized rocks, mud puddles, and small steps. It was awesome. It ultimately got us out to Meadow Knob where we got another breath taking view looking west this time. Onward and downward we went.

Shortly after we came to the big rock step. Its a sharp curve in the trail where there is almost a reverse of what we did earlier. Going up isn’t as easy because you don’t have gravity helping you. I put my jeep in easy mode. 4 low and both lockers. Climbed on up without an issue. The new guys needed some spotting that Andrew and I took turns doing. Few folks decided to challenge themselves and their rigs and find out what they can do. And happy to report they all made it over with no damages.

After this the trail begins its wind down. It smooths out and makes its way down the mountain in a few switch backs. Gradually turning into a gravel road. We stopped at this hill climb clearing to air back up and end the day.

Over all it was a very successful trail run. No damaged rigs. No popped tires. And several people exceeded their expectations on what they could do. I call that a success. Looking forwards to everyone coming out again on this trail or another!