A few of us were talking about another run out to a park to push ourselves a little bit. We’d been doing a lot of stock friendly runs but sometimes it’s nice to get out and really push yourself and your vehicle. We decided to go to Chaos Off Road Park (CORP) in Capon Bridge, WV. Shortly after making the decision a friend of mine with a Jeep from Indiana also mentioned she’d like to go. We had a few more that thought they’d join us but last minute plans change. Our group ended up included the following:

Shortly after leaving the parking lot we bumped into Dan and John who didn’t have much of a group of their own, and decided to fall in with us! We headed out to show everyone CORP since many had not been there. The Sinkhole and Glory Hole were big hits, with most choosing to run through them at least once. We also had to prop several folks up onto RTI Tree. The moguls in the area were also a big hit. 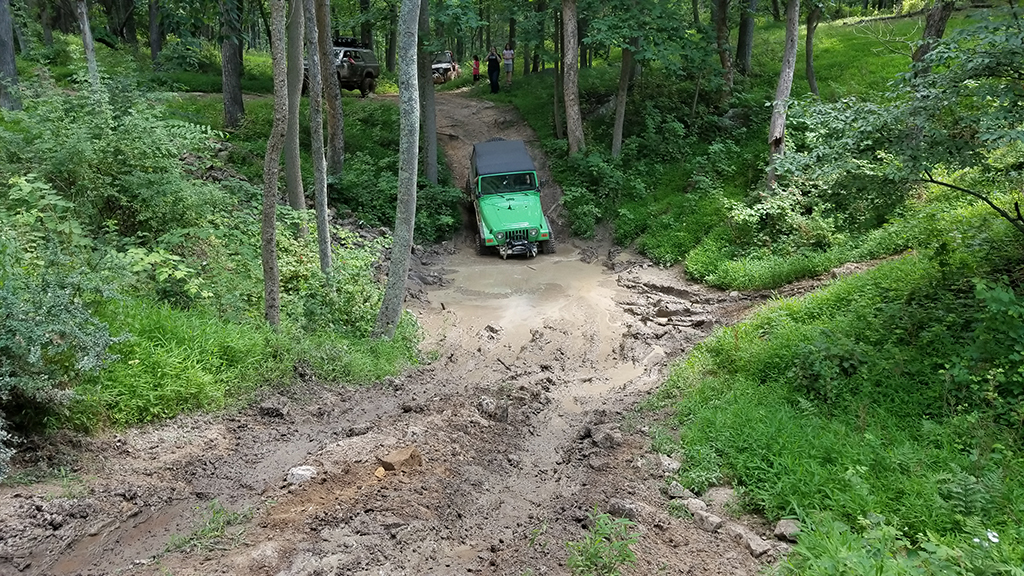 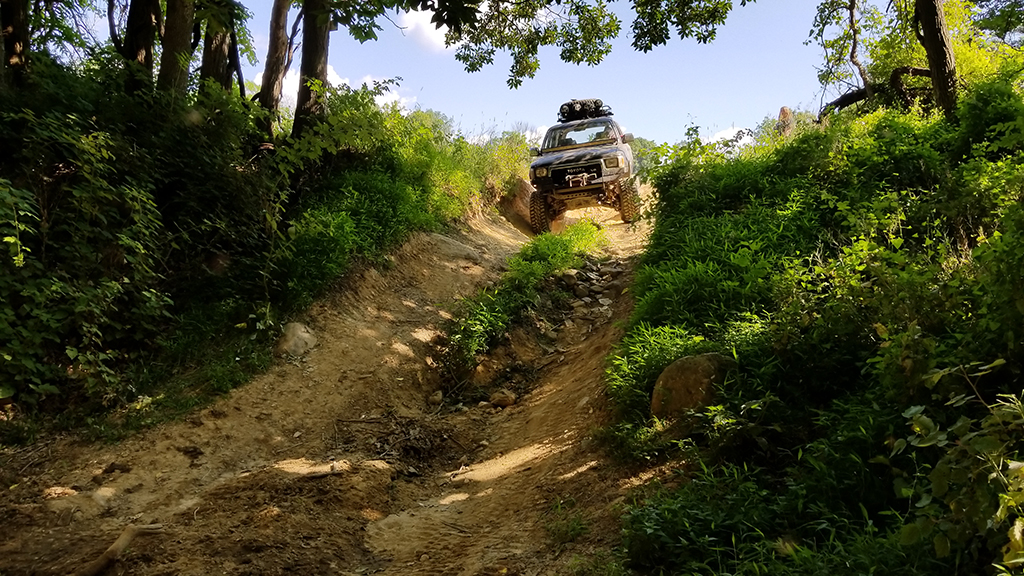 It was around this time that Kevin, who had come in with us but wheeled with some other friends in the morning because they were leaving ended up meeting back up with our group. We asked John (who turned out to be a Chaos Trail Guide) if he knew of any good rock gardens we didn’t know about. He suggested checking out Coyote Rock Garden which we were right next to. We all went through that area, taking different lines. At one point I hopped in Kathryn’s Jeep as Justin drove and we took it back through a section. When I got out Kathryn had hopped in my Xterra, and immediately gotten it stuck! She had driven over a large rock, that kind of looked like a dinosaur egg, and as she rolled over it apparently it had tipped up and wedged between the spare tire underneath and the leaf pack. As she rolled forward the rock had tipped up, eventually lifting the back end of the vehicle several inches above the travel of the rear corner! After some mild excitement we got her backed up and back on all fours. She said it was my fault for letting a Jeep Girl drive my Nissan! 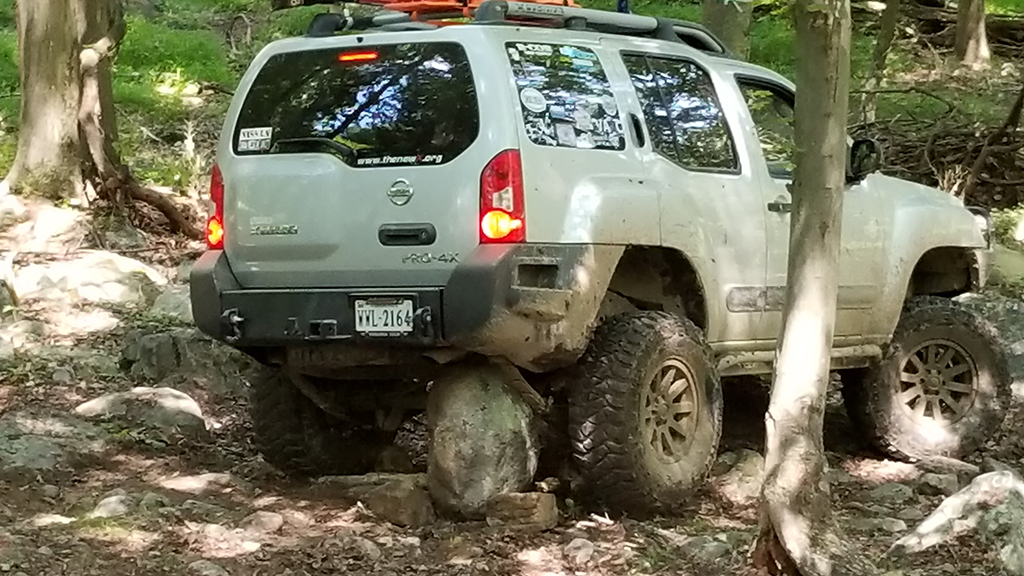 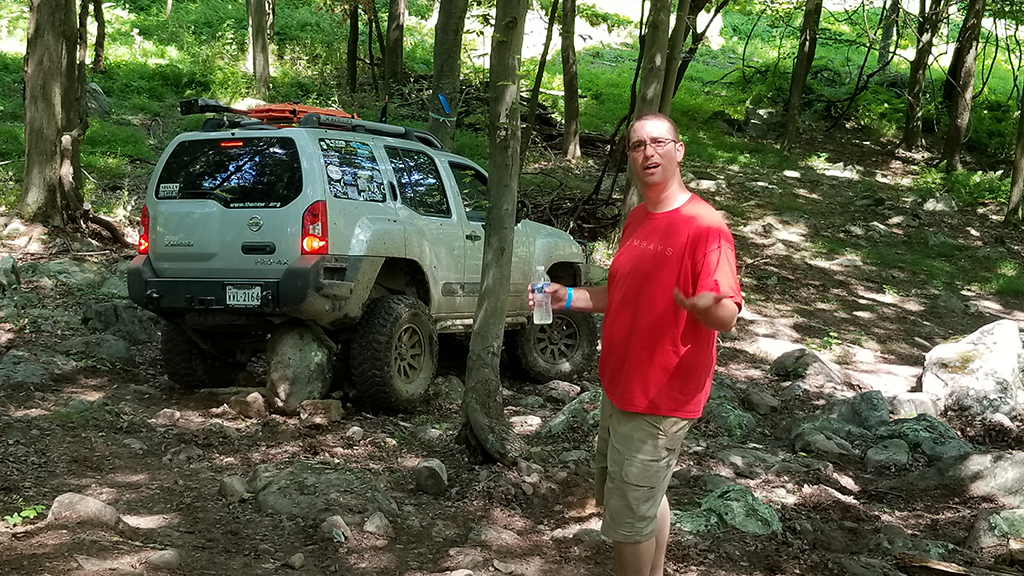 We decided our next stop should be lunch. Dan talked to his two girls who decided they had wheeled enough and were ready to head home so they could make it to a birthday party. We said goodbye to them and headed up Upper Sandy Ridge to enjoy lunch on the top of the mountain. Lunch was good and while eating Kevin suggested we go hit OCC Rocks which he had done in the morning with the other group and he wanted to do again. 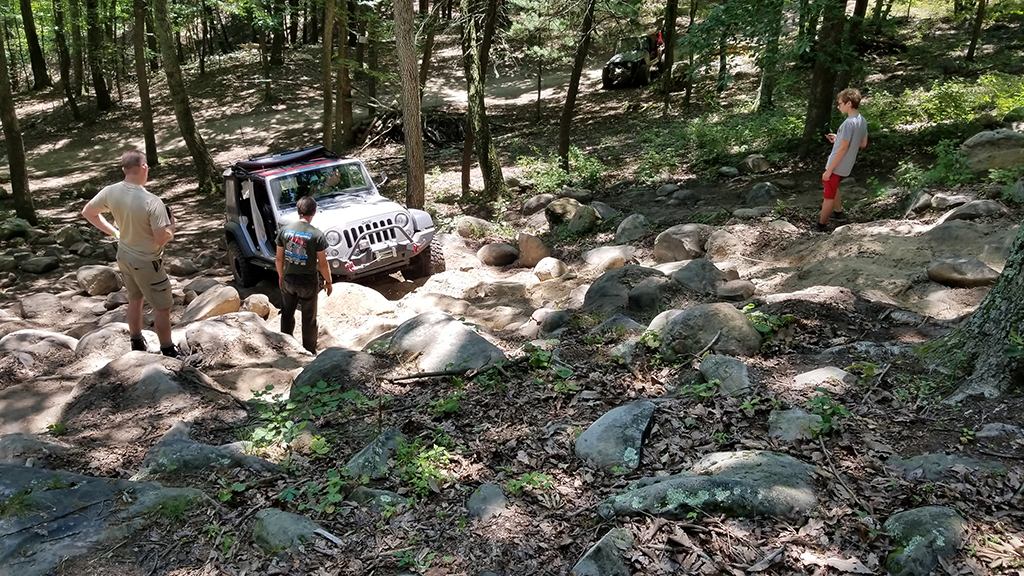 After lunch we took a sharp left and got to the top of the OCC Trail. We all went down, then many of us chose to go back up it via various lines. Kevin took the most aggressive route in the group and ended up getting pretty hung up with his front diff just past a big rock stopping rearward retreat and the rear lower control arm mounts on another rock stopping forward progress. Out came the winch and in no time we had him free and to the top of the hill. Once everyone was up again Kathryn asked if I wanted to drive her Jeep back down, and so I offered to let Justin drive the Xterra back down. I was looking forward to showing Kathryn what her Jeep could do! We took the same line down that Kevin had taken up (the far left line if looking up the hill). Kathryn got nervous as the vehicle pitched down as we stepped down over some large rocks, bracing herself between the footwell and her grab handles. She went to tell everyone she was having fun over the CB, but as she keyed the mic we dropped again and she just ended up screaming into the CB. Everyone thought that was pretty funny! We made it down in one piece. Justin had safety brought my Xterra and Cherie down another line, apparently discussing with Cherie the differences, pros and cons, between the Jeep LJ and the Xterra. Everyone else made it back down without issue.

After that excitement our next big stop was A Few Good Rocks. I had never done this trail, seeming to be right on the edge of what my vehicle could do. We made it through without a spotter or getting hung up. I was pretty happy about that. Everyone else followed through behind us, except John who took the more exciting entrance, and with varying amounts of spotting we all made it through the trail. Ed got a little hung up at the beginning but once past that point did the rest with little help. After hitting the moguls again we went on to Bronco Rocks. There we all came down them, but I suspect that a yellow jacket nest has formed in them because as we took the far left line, coming down, people in two vehicles got stung including Cherie in the face. With some ice though we had no major issues and moved on. 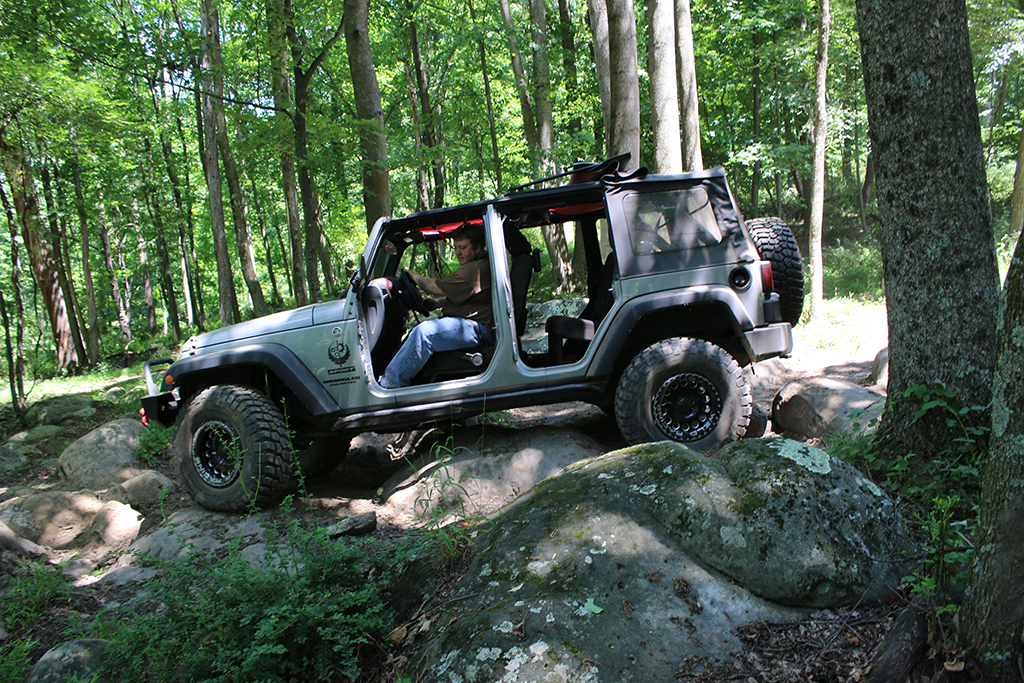 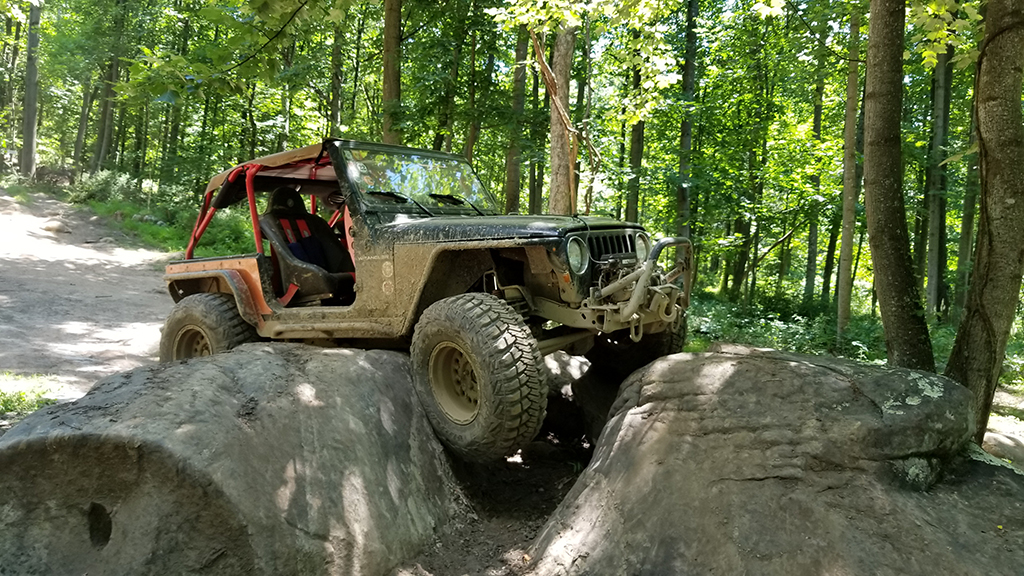 Next we came to Eckoh Rock Garden. We most of us moved through the center line John showed us all what real flex looked like as he played amongst some boulders at the entrance. Very impressive! Eckoh Rock Garden was another small accomplishment for me since I had never had a chance to go through the center of it before. But after spotting several others through it I had identified a line I thought I’d make, and with an external cue or two was able to make it through without much excitement!


It was getting late in the day and we decided to see if we could do a few more hill climbs before wrapping up. Kevin suggested Pica Pica, so we hit Pebbles & Bamm-Bamm and Obstacle Course Start on the way there. We all went down Pica Pica and then several chose to drive back up it. I should point out, it was so dry the day we went. I had never seen CORP as dry as it was that day. Pica Pica, which normally is a sliding muddy rocky mess was dry enough I could imagine Chinchillas would be happy taking a dust bath pretty much anywhere along the trail! I decided to hop in Kevin’s backseat and ride back up with him, then back down. It was fun riding in the JKU with the doors off. 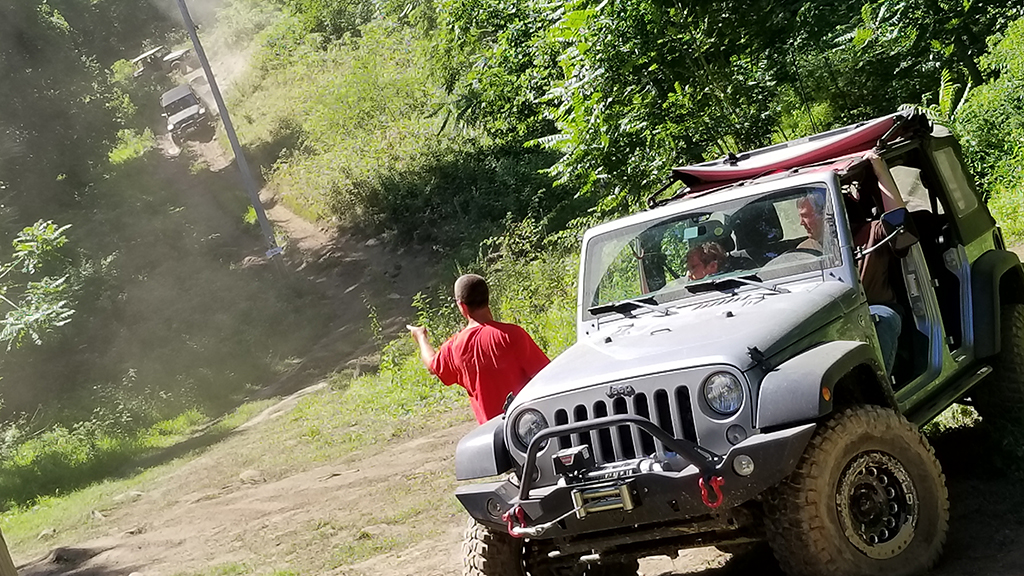 Once at the bottom again we headed off and up Rubencon Trail, which was a hit, and then over to the 101 Rock Garden and Poser Rock. I got high centered on a large rock just next to Poser Rock when a log I was driving over gave way, leaving my belly on a large rock and all 4 tires reaching for anything! Kathryn, who has been loving her new LJ, was super excited getting to hookup to pull me off with her Jeep. She and Kevin did the hookup, and Justin slowly pulled me back to regain traction. 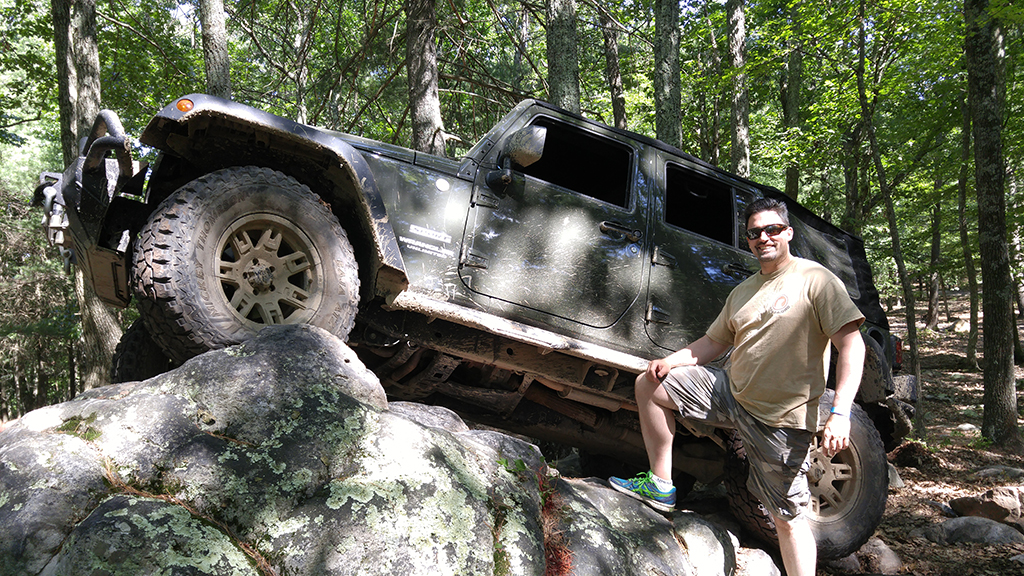 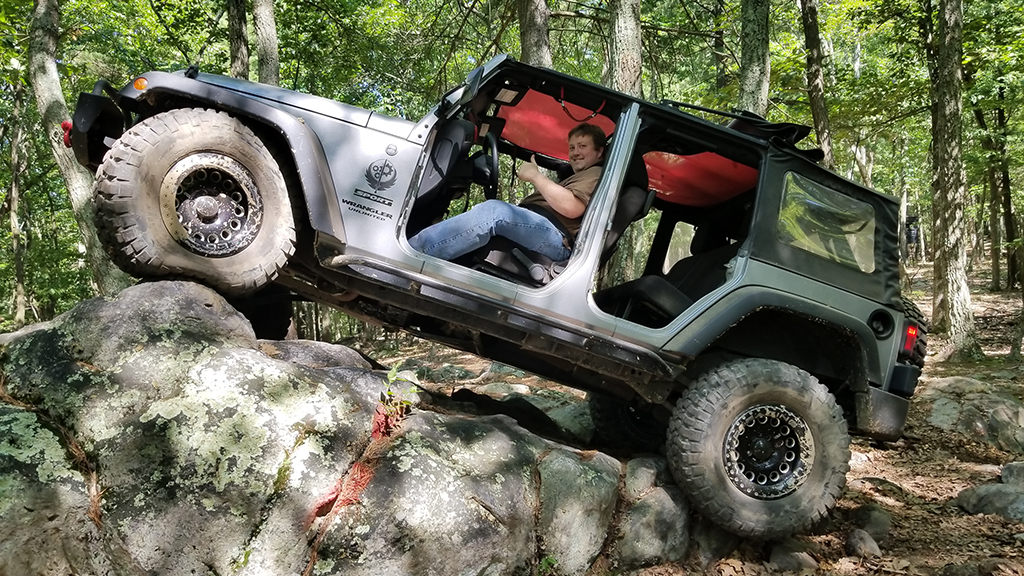 Several got up on Poser Rock and got good pictures. Kevin managed to rip up his rear driveshaft boot in the process. Poser Rock though is great for checking things out on the bottom of your vehicle. Ed found out that his oil pan and transmission cross member were both dented, and decided he needed to get skids ASAP. But I think Kathryn’s experience on Poser Rock was everyone’s favorite. Once Justin had gotten it up there she hopped out with a spray bottle of water and started washing the front diff cover off. When asked what she was doing she said she had paid a lot of money recently to powder coat that new Poison Spider diff cover and so she wanted it to show in the pictures! John was laughing pretty hard about that whole thing on the side. Anyways, the diff cover looked good and no damage was found on Kathryn’s rig. 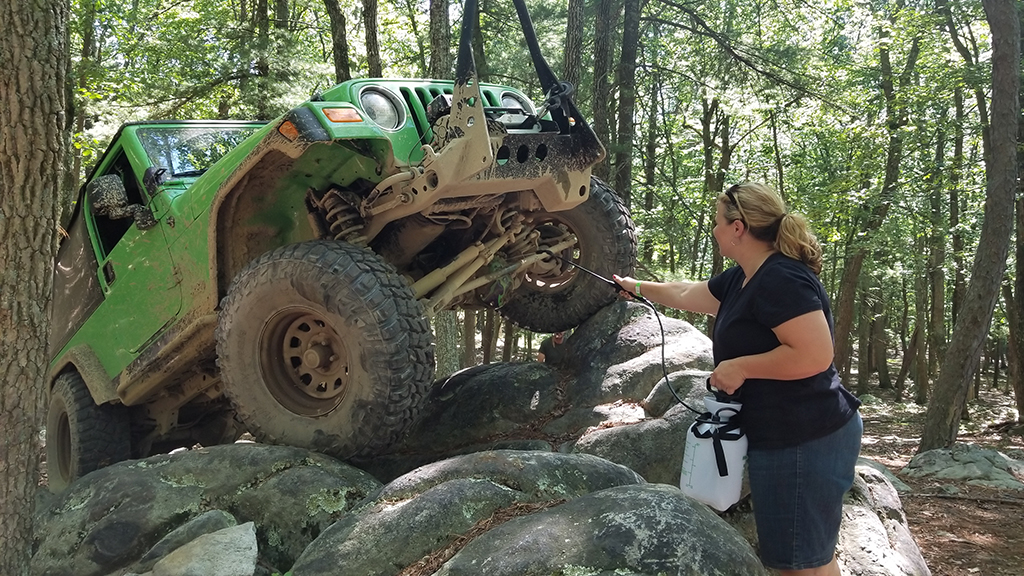 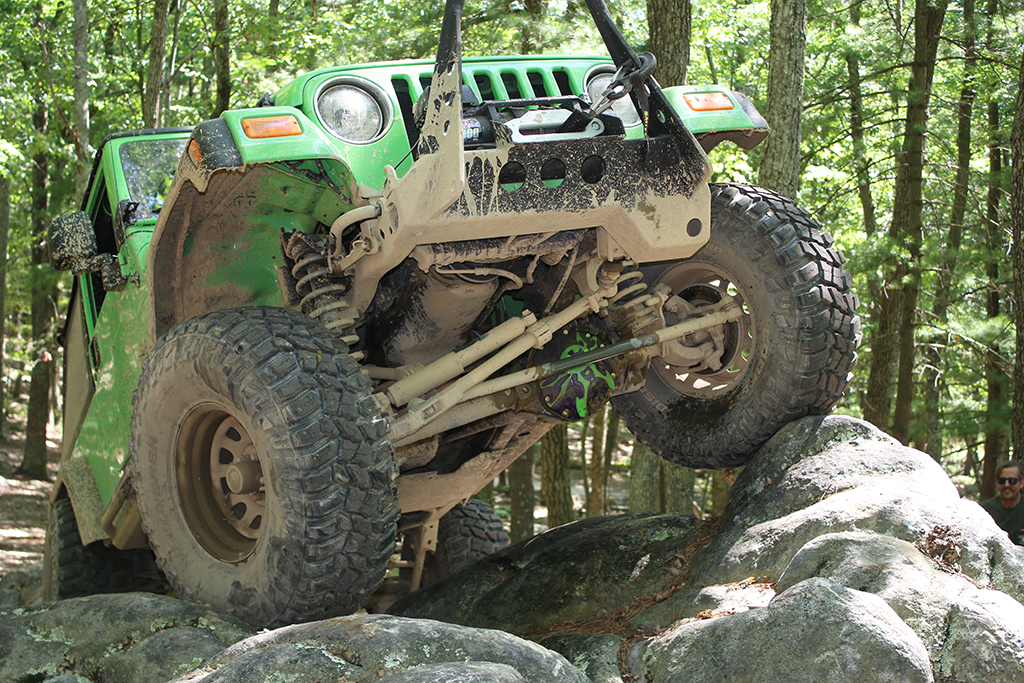 It was late in the day though, and with the goal of being ready to roll out by 5pm we figured it was time to head back. The ride down the mountain was not super eventful. We did choose to go down what I think was Slick When Wet which was a fun rocky end to our day.


I think by the end, despite some damage, everyone was happy they had come. The trails we tackled were hard and pushed everyone and their vehicles. We all agreed we had a great group and it was a great day to be out, and it was a lot of fun! For those new to CORP I think they’ve all found a new park to make sure they come back to with more frequency.