Cherie and I just got back from just an amazing weekend with new and old friends attending the 12th Annual GPAX Shocker Run. The event, hosted by the Greater Pennsylvania Area Xterra club, this year was hosted across two venues over two days. Day 1 was Friday at Rausch Creek Off Road Park in Pine Grove, PA and Saturday was at Anthracite Outdoor Adventure Area in Shamokin, PA. From CORE the following folks attended:

Cherie and I arrived Thursday night to Twin Grove Campground to a rented 2 bedroom cabin. Normally these big off-roading events in this area result in the campground filling with off roaders. This time however between the mix of venues and and other factors we found ourselves in a nearly deserted campground. Jesse and Brittany arrived later in the evening to the campground but we had decided to just meet up in the morning.

Friday morning we met up with Jesse and Brittany and off we went to Rausch. At Rausch we met the rest of the group, totalling about 15 vehicles including Jeeps and Toyotas. We broke into two groups with Cherie and I, and Mike C., joining the bigger group heading off to do black and blue/black (or purple) trails. Jesse and Brittany hopped into the easier green group in their Jeep Grand Cherokee. 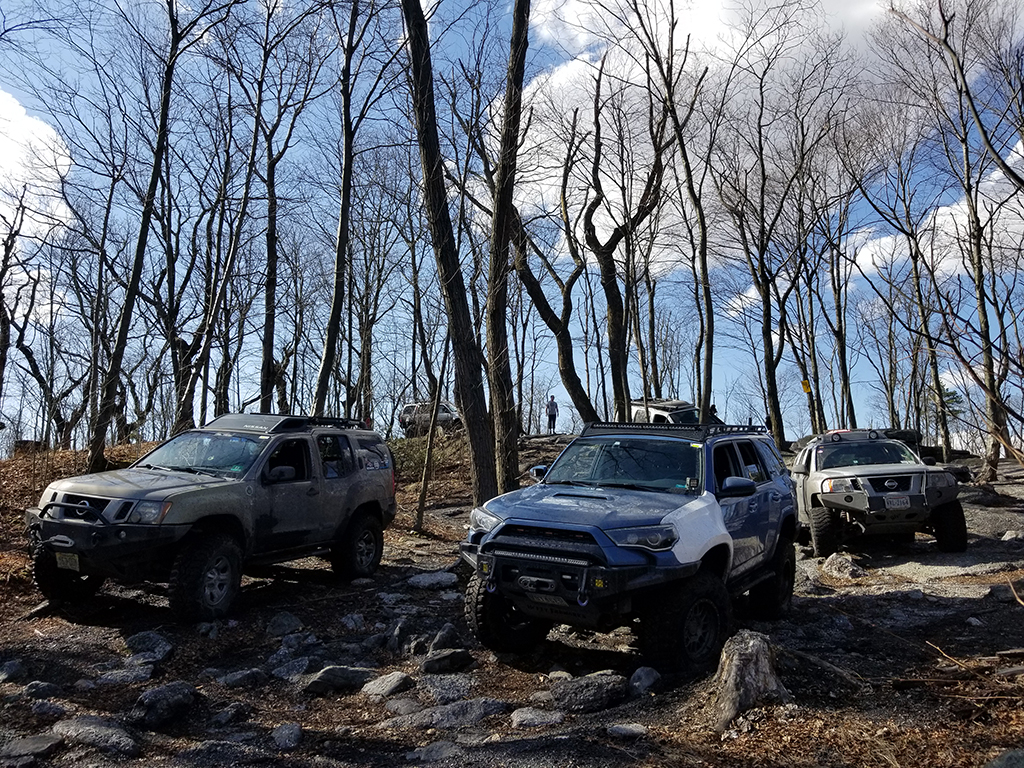 We set off to tackle Krawlin for Cops, a new blue/black trail that opened recently. It’s a great trail and if you haven’t explored it yet I would encourage you to. There was one particularly exciting loose rock section on a very steep downhill that was especially interesting. Especially when a few guys in the group lifted the whole back end of their vehicles even further into the air as they pivoted their diffs up on a big rock in that section.

Our day continued with the entire length of Snake Bite and Snakebite (why are they different?) Then we stopped for lunch where for $20 Jeff’s son Nick drank a bottle of pickle juice. Much to everyone’s surprise the pickle juice did not come back up the rest of the day despite his dad’s driving. Next we tackled trails 21 and 22. I’ll be honest, I’d heard 22 was pretty hard but figured I was with a good group of friends so we tackled it head on. The trail really wasn’t bad at all and I look forward to doing it again. After that we did the entire length of Yellow Jacket. The highlight of Yellow Jacket was an optional rock garden and steep slab of rock at the end. Three vehicles tried it with only one conquering it without a winch. One vehicle got a smashed back window out of an attempt. Mike C. pushed his newly built 4Runner and tested all his armor! After Yellow Jacket we called it a day and headed back toward the parking lot.

One vehicle got a smashed back window out of an attempt.

By the end of the day we had tried to use about half a dozen winches to find out most didn’t work or had problems for one reason or another! The sentiment throughout the day in the black group was that this is a dumb hobby. But we were having a blast! My understanding was that the green group also had a great time, although with slightly less excitement.

Our evening wasn’t over yet. Mike O. had just arrived to the hotel and so “the CORE group” met up with him to get some dinner at nearby O’Neals in Pine Grove. Well O’Neals was packed, something about St. Patrick’s Day and it being a pub… so we headed toward the newly opened 2nd location in Tower City back over by Rausch Creek.

We got seperated because of the way we were parked in Pine Grove so headed over functionally in pairs. Next thing I know I’m getting a call from Mike O. in the Xterra. While on his way his rear wheel had just spontaneously fallen off and now he was on the side of the road. We pulled up behind him about a minute later on the back side of a blind curve. Mike C. in the 4Runner stopped far enough back so that people coming down the road would see his vehicle stopped in the lane and Cherie and I pulled forward of the stopped vehicle.

Jesse and Brittany showed up moments later with the tire! They were in front of Mike and were quite surprised to see the wheel and tire fly off but retrieved it before heading back to help with the repair. Long story short the Xterra was not repairable with what we had there so we called a tow truck and the state police. An hour later the Xterra was on a tow truck headed to a nearby garage, we had seen no police so I called them back and said don’t worry about coming, and we headed off to get that meal at O’Neals. At dinner Mike O. decided he’d need to hang around the hotel and deal with the vehicle. He’d driven the whole way to PA, and literally broken on a road on the northern edge of the park, but wouldn’t get to wheel on this trip.

We caravanned up to AOAA with Jesse and Brittany again. After paying (we had a free pass from last years raffle!) we joined the forming group of GPAX Shocker Run attendees. Saturday drew between 20 and 30 vehicles. The list included a few friends not there Friday including Keith on his new leaf springs (he had installed the night before) and Angel with his beast of an Xterra on 40in tires.

Saturday we planned to be in a green group, with the Mikes and Jesse and Brittany. With Mike O’s Xterra down we were down a Mike, but the 3 vehicles that remained stuck to the original plan. At the morning meeting 4 more vehicles opted to join the green group and I got volunteered to lead it. As we lined up we got 1 more vehicle, a 4Runner driver who just spontaneously drove to the park, was told he couldn’t wheel alone, and then recognized Mike C’s new 4Runner (a popular build on the 4Runner forums) came to see if he could wheel with us. Our group of 3 had grown to 7. Mike C. was tailgunner in the 4Runner.

Off we went to enjoy green trails! I won’t recap what all we hit but our group was good and we covered a lot of ground. Mike’s 4Runner continued to impress as he continued to stretch its legs on this shakedown weekend. On the green trails he was able to hit some obstacles at speed which really showed how well tuned and performing his bypass shocks and 35in tires were. 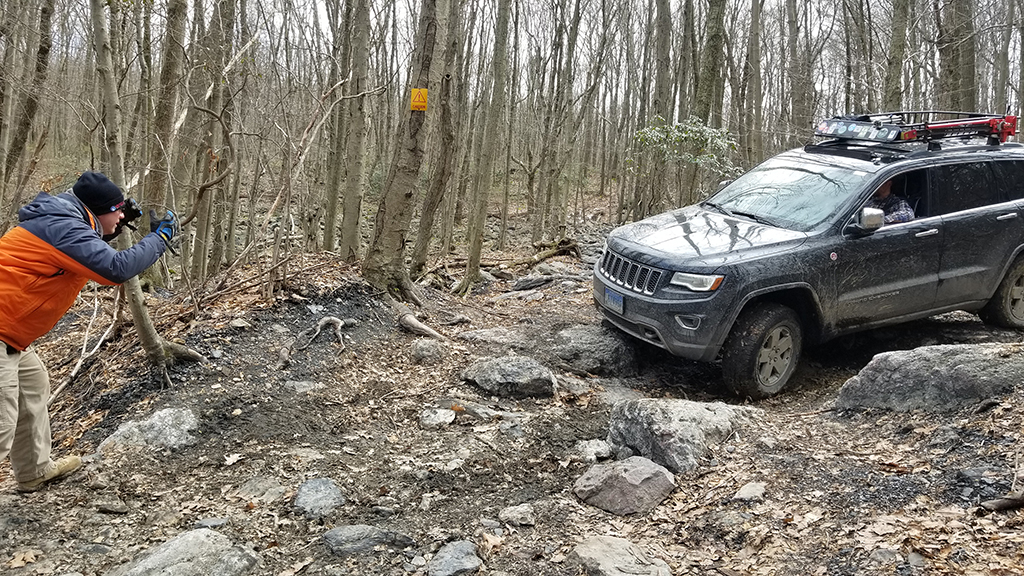 We headed back to the parking lot for a hot lunch available on-site from Kelsea’s Kitchen. The food was good and it was good to chat with friends in the other groups to see how their days were going. One more late arrival showed up just before lunch and decided to jump into our group. Our group of 3 vehicles had grown to 9.

In the afternoon we tackled some harder greens as well as explored some areas I wasn’t as familiar with. The day culminated on the group choosing to tackle a challenging blue trail to finish out the day. Trail 39C is a challenging uphill due to the slope and the large loose rocks that cover the trail. Mike C. decided to try the trail going up to see how his new rig would handle it. It did great! He also confirmed that he thought it was doable for everyone in our green group if we all went down it which is easier.

Our group of 3 vehicles had grown to 9.

I went first and identified a few areas that people would need spotted through. After me came Bill. Cherie spotted him through the first obstacles. We tried some rock stacking further down the trail to get him over the biggest obstacle but the rock stacking didn’t work out. We eventually got him unstuck but decided to move the rock after he passed so the remaining trucks would have that rock as an option not a must hit obstacle. The rest of the group made it through without incident. I really appreciated the enthusiasm of the group and their patience as I wandered a bit on some of the green trails.

After that trail we headed back since we were supposed to be off the trails by 3:30 and the raffle was to start around 4pm. After a quick group picture with the Berryville Bucket we joined the group forming for the raffle.

Cherie and I put in a few dollars to try and win a winch for my dad but alas it didn’t happen. We also paid to join GPAX as a supporting member, something we should have done long ago. Jesse and Brittany got a 50in lightbar! Thanks again GPAX for continuing to host great events, great raffles, and draw great people year after year.